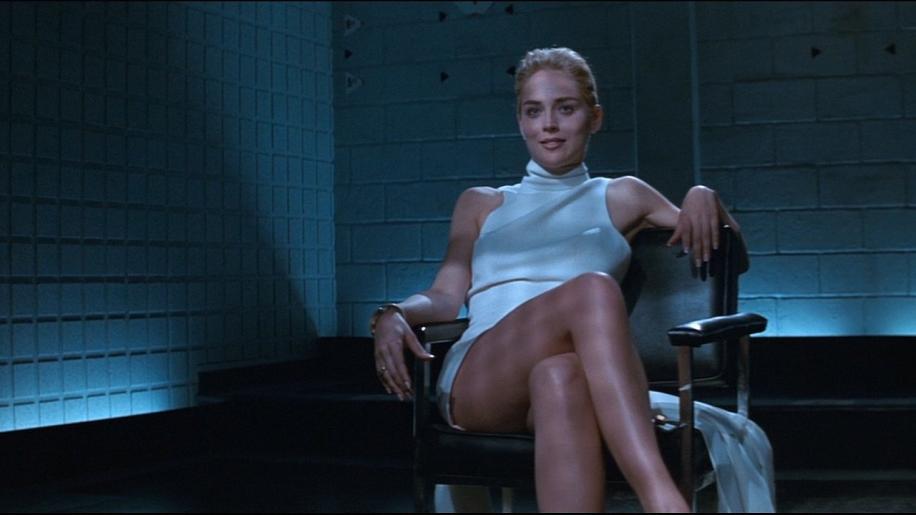 The disc has been given a theatrically correct 2.35:1 aspect picture that has been anamorphically enhanced for widescreen TVs. I felt that this picture was far from 'ultimate'! On the whole it is quite a vibrant picture, colours are bright and reasonably strong, but there were plenty of occasions of washing, the colour fading to a fraction of its former strength, occurred; sometimes within reversing shots in the same scene. A typical example is when Nick opens Hazel's mail box when following Catherine for the first time, the reverse shots (from behind Nick) are strong and vibrant, the front shots are washed and thin. The colours are not helped by the fluctuating black level, sometimes pretty decent, other times pretty abysmal but always rather grey; in their commentary Verhoeven and Bont allude to intentional greying of the night club lighting (clearly the worst for blacks), perhaps it was also intentional throughout the rest of the picture, but somehow I doubt it. Digitally there were occasional posterisation problems, and plenty of edge enhancement to spoil the view. Original print problems occur as specks and grain throughout the run time. In all a pretty poor effort even for a fourteen year old film, for a so called 'ultimate' I was rather disappointed and perhaps that is colouring (pun intended) my judgement, the print just looks old.

Only three Dolby Digital tracks to choose from, English 5.1, English and French 2.0 surround, and there really isn't much to choose between them. Ok, the 5.1 track has the wider and clearer separation, and slightly more defined bass, but all are predominantly front loaded. The only time when there is any significant action from all speakers is with Goldsmith's score, or the night club scene, both times there is some actual punch to the sound. Otherwise it is an average range, pretty poor bass throughout, sitting with average separation and few effects. Dialogue is clear and precise, never distorted and clear from distortion and hiss. For an action film there is precious little to gain from turning the volume up, and which ever track you pick none are anything worthy.

First up there is the audio commentary from director Verhoeven and director of photography Jan De Bont. The pair talk extremely enthusiastically about the film and though there are the occasional pauses the two rarely let up. They talk about anything and everything about the production, if you know about Verhoeven's commentaries, you know he can wander off the point and be quite controversial in his view, which is not really the case here, the controversial nature of the film keeping him on track. Both are proud of the film and are quick to point out any short comings and even quicker to praise the best points. It is a vivacious talk and one that may need a second listen to fully appreciate all that is said.If ever there was a waste of bitrate it is this, the introduction to Basic Instinct, literally Stone says just that and it's over! It is obviously left over from the slightly more substantial Interview with Sharon Stone. This is a ten minute chat with the actress who talks about her involvement with the film, how she was cast, the acting choices she made and 'that' scene. Whether or not you believe her version of events or Verhoeven's, it is one of those Hollywood myths that are repeated so often that no one or everyone believes it. She is reasonably animated and obviously proud of the film, and I think she knows that it made her the star she is today. Also contains plenty of film clips.Blond Poison is the making of featurette for the film that runs for about twenty five minutes. It has interviews with the major crew of the film, and Stone, though Douglas is only represented by period interview clips. We are taken through the making of the picture, from script approval to the problems with shooting due to the Gay Rights protesters, who themselves are interviewed for this feature. It is pretty comprehensive if a little short, getting across the main problems and success that the film had during its making and release, fair few film clips to pad the run time.

The story board to film comparison section show cases three scenes, the car chase, Douglas and Stone love scene and the elevator murder. They show the original story board pictures with the film playing in the right hand corner, except the love scene which only has the pictures accompanied by the sound track. Not really into these type of extras and found it rather dull.

Next up is Cleaning up Basic Instinct, it is not as one might assume a feature on the processing used for the DVD clean up, rather the ludicrous amount of, extremely bad, dubbing that was applied to Basic Instinct to allow it to be played on network TV; last for five minutes and is utterly hilarious! Does have some alternate takes from the film (which is shown immediately before to highlight the differences) used to smooth some of the worst editing jumps.Finally there are two screen tests, one for Stone the other for Jeanne Tripplehorn, terrible video quality, but interesting in a one watch feature sort of way.

Sadly this edition is rather far from 'ultimate' and serves little other than an marketing ploy to remind people about the Basic Instinct 2 film. There is nothing in this edition to persuade owners of any of the other discs to upgrade, and only gives more choice to those that have yet to purchase. No matter how good the original film, all this repackaging does nothing but devalue its worth.