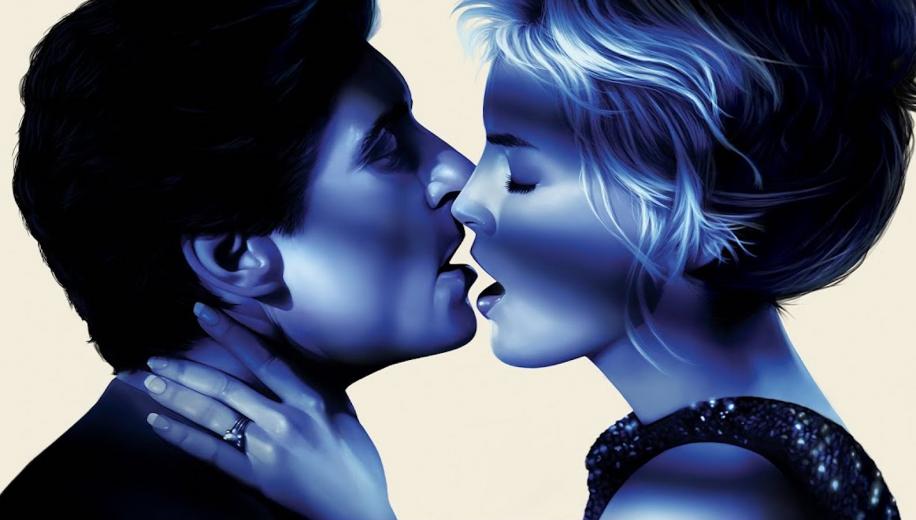 Basic Instinct transcended its genre limitations. Hell, it blew right through them. Originally conceived as just another erotic thriller, its excess stemmed entirely - and perhaps rather unsurprisingly - from director Verhoeven, who may have wowed and shocked Western audiences in equal measure with his uber violence in action classics Robocop and Total Recall, but had actually come from a rather more sexually explicit Dutch cinema background, with Basic Instinct marking the pinnacle of his proclivities in terms of both devilishly gratuitous sex and violence. He rode the damn rollercoaster all the way to its natural... climax, turning in a desperately twisty-turny serial killer / detective plot dressed up with neo noir intent, and brandishing upcoming starlet Sharon Stone front and centre in what would be the defining femme fatale role of the past half century.

Michael Douglas would hold on for dear life, putting in a - green V-neck notwithstanding - impressive turn considering he was pushing 50, managing somehow to just about keep up with the sexual man-eater that was Stone's anti-hero, with the two of them committing body and soul to all the mad excess Verhoeven had in store for them. The director would bring all his skills to bear, delivering undoubtedly his most polished, slick production, brimming with fever-pitch tension, oozing palpable sexual chemistry, and, of course, his trademark way-beyond-excess sex and violence, often wrapped up together in one big ball of sweaty, bloody, thrusting, ice-pick-wielding fury. It was classic Hitchcock only lensed by the guy who liked to see bodies both brazenly naked and also brutally ripped apart, clearly informed by the likes of Psycho and Vertigo, but refashioned with the sensibilities of a Euro-auteur who'd basically been given carte blanche by Hollywood.

Joe Eszterhas - whose subsequent collaboration with Verhoeven on Showgirls would not only be the nadir of both of their careers, but also mark the start of their slow falling out of favour - wrote an electric script, punctuated by some surprisingly sharp dialogue, brought to life with a number of excellent chase sequences and bolstered by a memorable, Oscar-nominated score by Jerry Goldsmith. But it's the sex and violence that endure, pushing the boundaries, blurring the lines between mainstream and soft core pornography, and defining an entire genre, to the point where countless imitators since have simply not been able to complete. Stylishly lurid excess with a wicked grin, it's a hell of a ride.

Basic Instinct comes to UK 4K Ultra HD Blu-ray courtesy of Studiocanal. This Ultra HD Blu-ray release boasts a frequently gorgeous and lavishly restored native 4K image, further enhanced with Dolby Vision. Scanned from the 35mm image negative in 4K, with the scenes from the "European Cut" restored via scans of an internegative, it has been lovingly cleaned up and will likely wow right out of the gate.

A lot of effort has been put into this meticulous restoration of the now-near-30-year-old movie, and it sure as hell shows

Right, let's talk about the colour scheme first. Basic Instinct has always run quite hot, enjoying an "excessively tanned" look which translates to a very distinctive 4K Dolby Vision presentation here, but doesn't always give the characters a natural skin colour. There are some oddly pinkish edges coming in here, but they're thankfully quite fleeting, and once you settle into the main meat of the production you'll likely get swept up in the distinctive style which is still hot as all hell, but looks pretty damn good nonetheless. Whilst we're on the subject of criticisms, though, there's one other unsightly mess which comes in the scene where Douglas' cop first drives Stone's prime suspect home in the rain, and they have a conversation in the car whilst rain casts monochromatic leopard-skin patterns on their faces. Perhaps not exactly a 4K presentational issue, as the patterns looks perfectly rendered, there's still something damn odd about the effect which never felt as glaring as this on any previous release.

Accepting these as modest to minimal issues, really what we have here is a largely excellent 4K restoration, with the film gifted a new lease of life on the format, bringing some excellent detail to the slick, tanned faces, the hair, the outfits and the sets. It looks better than ever before - even the accompanying Blu-ray has been remastered - and stands out in native 4K, transcending the innate desire to go for soft erotic thriller conventionalisation to end up a glossy neo-noir thriller that looks wickedly stylish. Cleaning duties on the restoration were clearly extensive, but never noticeably so, with the film still boasting a suitably filmic texture, and detail still very evident even on the smooth visages of the characters, slick often through the style of the piece.

WCG, HDR and Dolby Vision all come into play, likely responsible for some of the more questionable early-doors skin tones, but also responsible for the gorgeous tans, the excellent contrast, and some moments of very intense pop. The night club scene is electric, the interrogation cool, but no longer heavily drowned in a single overbearing tone, and the 'Frisco streets are stunningly lit, sparklingly with nighttime vibrance. Black levels are inky and deep, boundless at times, and overall it's a very welcome upgrade on the format. A lot of effort has been put into this meticulous restoration of the now-near-30-year-old movie, and it sure as hell shows.

Basic Instinct's 4K Blu-ray release eschews any 3D High Definition object-based immersive audio upgrade of the Atmos variety in favour of just delivering the goods with a cleaned-up and restored original DTS-HD 5.1 Master Audio track. Although it's hard not to yearn for the movie in Atmos - there's that sweeping score and plenty of action to stir up a 3D audio storm - this is a tremendous track nonetheless, and hard to fault.

Dialogue remains firmly prioritised throughout, dominating the frontal array, whilst effects enjoys the over-the-top violence - the signature ice-pick basically earns its own suitably excessive signature sound effect, while gunshots, and car chases / crashes land with some veritable LFE impact. Goldsmith's score, echoing his earlier Verhoeven work, is still a high point of the production, affording it some not insubstantial propulsive momentum, whether during the speeding car chases or the sexual clutches, going full throttle to somehow give both style and intensity even during the heights of the visual insanities on offer, and affording plenty of surround action on the array. It's a great track.

With no sign of a US 4K release even on the distant horizon - Lionsgate appear to be holding their cards close to their chest on this one - it's lucky that the UK set from Studiocanal is pretty damn comprehensive, not only wielding the 128 minute "European Cut" (the equivalent of the US's longer "Unrated Cut") but also stacking up a fabulous selection of extra features.

... a great set to round out a great release

Headlined by a pair of Audio Commentaries - one from the Director, and one from feminist academic Camille Paglia - the meat of the new material comes in the form of a near-feature-length Documentary, Basic Instinct: Sex, Death & Stone, which covers almost everything you would like to know about the production, and is further supported by a new Featurette on the Score. There's a new Trailer too, whilst the rest of the carried-over material comes in the form of the original Making Of Featurette, a number of Cast and Crew Interviews, and a selection of Storyboard Comparisons and revealing Screen Tests. Best of all? It's all ported over to the 4K disc proper, leaving the accompanying double-Blu-ray set largely superfluous.

Basic Instinct both pushed the erotic thriller right into mainstream territory and signalled the death-knell of it, basically going so deliciously over the top to deliver its thrills and sexual spills that it left the genre with nowhere to go. You only have to take a glance at everything that came after it - from Sliver to Showgirls to Jade to Body of Evidence, Killing me Softly and Color of Night to see that there was precious little left to say. Indie fare like Bound still stood out, but were the exception to the rule, and perhaps marked the direction the genre would have to go in to still show some traction, with Basic Instinct 2 really showing just how low the genre could go as it imploded. No, Verhoeven's 1992 hit is something of a classic one-of-a-kind, and it would be hard to see how they could ever pull off anything like this ever again.

Studiocanal's UK 4K Ultra HD Blu-ray release of Basic Instinct serves up the 128 minute "European Cut" (equivalent to the US "Unrated" version) with a loving new native 4K restoration, complete with Dolby Vision, as well as an excellent audio track and a comprehensive set of extras - old and new - all ported over to the 4K disc proper. It's a fabulous release, and comes highly recommended. And, for fans, it's utterly unmissable.

Basic Instinct is released by Studiocanal and available on 4K Ultra HD + Blu-ray™ from June 14th.