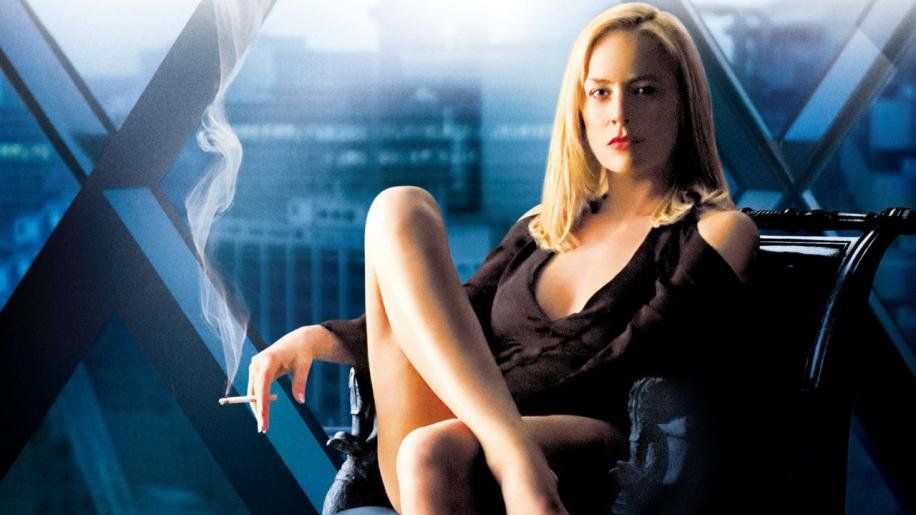 The first Basic Instinct movie will probably always be best remembered for Sharon Stone's notorious leg-uncrossing scene. Aside from its then-unprecedented explicitness (at least in terms of mainstream Hollywood), it remained quite an enjoyable b-movie thriller, with a few reasonably big stars associated with it, not least Michael Douglas. Its success made a sequel seem inevitable at the time, but since none of the original parties involved (the Director Paul Verhoeven, the Writer Joe Eszterhas, and the two leads Douglas and Stone) were prepared to reach an agreement, the project stayed in limbo for over a decade. Stone even obtained an out-of-court settlement after suing the producers when it failed to get made. Now, some fourteen years later, we finally get Basic Instinct 2, starring a forty-eight year-old Sharon Stone and set in London. Oh dear...

Catherine Tramell is back with a back. After killing her way across San Francisco and getting away with it (or did she actually kill anyone at all?...) she roars onto the screen in the driving seat of a Spyker C8 Laviolette sports car, screeching around an unbelievably deserted London whilst being pleasured at the hands of her latest sexual victim. At the point of orgasm she drives the car off a bridge and into a river, leaving her passenger trapped in the car and swimming to safety. Faced with several charges, not least murder, she is predictably freed on a technicality and subsequently decides to start plaguing the very psychiatrist who recommended her incarceration at the trial. Cue lots of sexual antics (with a much stronger fetishist angle than in the first movie), plenty of grim post-coital deaths and several unintentionally amusing therapy sessions. All in all, it's a pretty tawdry and uneventful affair, plodding along to a convoluted conclusion that cannot be explained even by excessive use of montages, voiceovers and flashbacks.

I cannot help but feel that this movie only really came about because of Sharon Stone's flagging film career. After all, nobody else from the first movie has returned to participate in this debacle and many have turned down roles in it. As soon as Stone started throwing lawsuits around, the production got back on track and it is the only vaguely big production that she has done in the last decade. Apart from her performance in Casino (where she was no doubt elevated by the tutelage of Director Martin Scorsese and method master Robert De Niro), Stone has done very little else of note over her entire film career. She has often had to resort to playing second fiddle to action stars like Seagal and Stallone and, after the horrendous Catwoman (which Halle Berry should probably be forced into exile on Dagobah for) Stone desperately needed something vaguely prominent and profitable, and where better to go than a sequel to one of her most successful efforts?

I have to say that, despite my not appreciating her talents a great deal, Stone is probably one of the better things about this movie (although that is not saying much) and she does look remarkably good for her age. I don't think she has any of the fire or sexual energy of the first movie and it's probably silly to think that she could seduce people as easily as it is portrayed in this sequel, but for a forty-eight year old woman, she's has a right to be proud of getting naked in this movie.When it comes to the sex, she talks a lot but doesn't actually seem to do a great deal. There are none of the sexual marathons of the first effort, just brief snippets here and there of Sharon going to work. (Even this, the supposedly uncut unrated version of the movie is not really as explicit as the first movie)

So how bad can this movie really be? Well unfortunately it has not really been thought out at all. It is chock full of flaws and plot-holes (like cars with electric windows that work underwater), a terrible, jarringly vapid script (“even Oedipus didn't see his mother coming”) that makes the writer of the original look like Raymond Chandler, and one of the worst locations chosen for this kind of sexual thriller: London. It would be like setting the new Rambo sequel in Paris - it just would not make any sense. The British cast, however good they are on their home turf, seem totally at odds with the material, with David Morrissey really struggling as the psychiatrist who inexplicably becomes obsessed with Stone's potential sex-killer, and David Thewlis utterly wasted as the cop determined to bring her to justice. Even Charlotte Rampling pops up, looking as if she is wondering what she is doing in this awful production.

I can't impress upon you just how many things are wrong about this production, how badly the producers and director (Michael Caton-Jones, the man who made the sexy political drama Scandal) messed it all up. Wrong location, wrong cast, wrong script, wrong story, even the sex-talk so savoured during the first movie is painful to endure here. I don't know who decided to green-light this but it was a bad call and this will go down as being a very bad movie indeed. For those who sit through it to the final reel, the double and triple-crossing nature of Sharon Stone's monologue just leaves you wondering 'what the hell is going on' and, more to the point, 'do I really care?' It's an ugly, uneventful and uninspired piece of cash-cow milking, well past its sell-by-date. Stay away from this dead turkey unless you really are into pain.