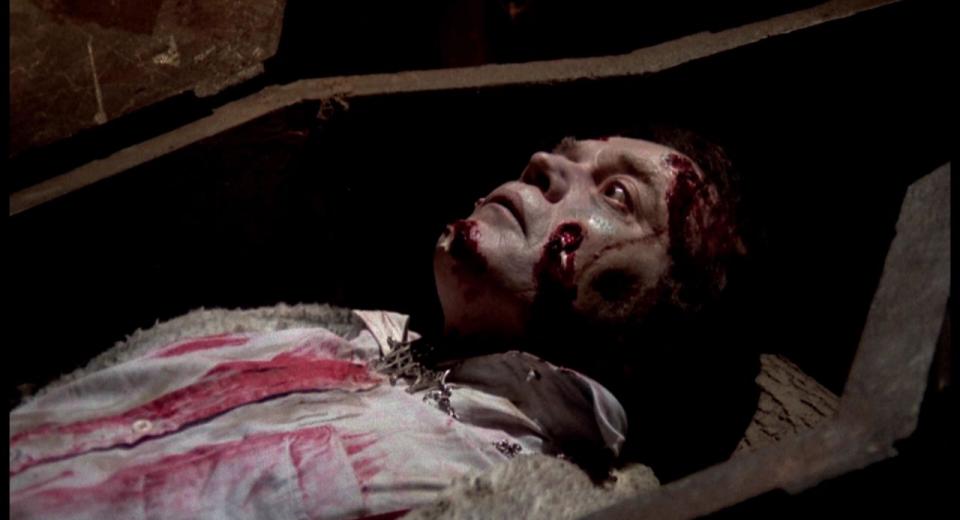 There has been a very nice clean-up of this film breathing new life in to its previous incarnations on DVD, leading to a bright and colourful image. Detail is pretty good, skin texture and, especially, eyes have a clear sheen, check out the ‘burn room’ where the charcoaled wooden panelling looks good enough to pick at, clothes have clear weaves and the ancient masonry of the castle looks sharp enough to cut your fingers on. It’s not all perfect, of course, soft focus and filming styles do tend to rob the picture of any true crispness but edges are held very well.

Colours are bold and vivid with all the primaries coming across well, check out the thick gloop of ‘blood’ red as it oozes under the door, or how well the blue of the sky grades. Flesh tones are very natural with the pristine nature showing up the over use of makeup.

Contrast and brightness are perhaps the only let down, black never really reaches the inky depths, but manages a very deep grey which does tend to flatten the frame somewhat, though if you look closely you can see a modicum of shadow detail; the blacks never descend into an incomprehensible mess, rather the whole style of the film has the ‘60’s’ TV vibe i.e. short frame with garish colouring – things are far better on location where gorgeous panoramic shots show up just how well this print has stood up to the test of time. Contrast is slightly hot at times, the whites are held in check just about but if you look closely they can clip occasionally and a few details are lost here and there.

The digital clean-up has retained much of the film's natural grain structure, so there is no over the top usage of the DNR machine, though the opening credits are far heavier with grain – it actually looks like the titles overlay was very dirty as there is plenty of static grain to contend with, but this soon cleans up. There remains the occasional dot, tramline and nick visible, but it’s never too distracting and helps with the organic nature of the film. Digitally there are no compression problems save a bit of banding in the depths of the mist, and there is no use of the sharpening tool either. Considering the age this is a very good picture, but it has to be taken as its found, it’s average at best. Sticking with the ‘Export version’ there is only the one track to choose from; English LPCM 2.0 mono. Like the picture there has been a deal of clean up involved with the track which has reduced any background hiss and removed any pops and crackle. However, what is first apparent is the lack of high fidelity (maybe a by-product of the processing?) which means everything sounds a bit like it’s playing through a pail of water. Ok, it’s not that bad, but you get the idea. The score is the loudest element of the track and comes across with suitable gusto. Dialogue is as clear as it can be, considering, but is always understandable and Sommer’s screams remain piecing. Effects are limited but the various stingers are still shocking enough. Bass is, obviously, limited and there are no real LF effects. It is a fairly functional track and manages to get its information across well enough, I just wish there was a little more at the top end to really bring some life to the proceedings. Audio Commentary (Export version only) - With Mario Bava biographer and (all round) expert Tim Lucas who provides a very strong, well-researched chat track that covers just about everything you’d need to know about the production and shooting of the film – down to influences, casting, art direction, locations, on set anecdotes and it’s place in history. If you want to know anything about the film, here is the place to get it.

Introduction by author and critic Alan Jones – Three minutes by way of an introduction to the film, explaining its place, the actors and ideas; anyone with any knowledge of the film will already know what’s presented but as a quick one-stop this will suffice.

Delirium Italian-style (11 mins, HD) – Horror maestro Ruggero Deodato talks about Bava and his relationship with the main man, his son and other gore hound Italian directors. He discusses many of Bava’s films and the style he adopted as well as looking (briefly) at the whole Italian horror genre. A laid back and entertaining piece full of information from the director who made one of the most notorious banned films of all time!

Mario Bava at Work – A photo gallery of the man himself behind the scenes of many of his films.

Trailers – Both English and Italian

Three versions of the Film – Original Italian version “Gli orrori del castello di Norimberga” in the original language with English subtitles, ‘Export’ version – exactly the same as the Italian version only dubbed into English and (for the first time) the butchered American International Pictures version which is missing some seven minutes of footage and has the original score replaced with a more ‘moody’ piece by Les Baxter. Terrific to have this available but stick with the Export version for the best watch. Baron Blood is Mario Bava’s attempt at splicing ‘youth’ and supernatural horror together, and is rightly hailed as one of the very first to do so. Filled to the brim with Bava’s trademark atmosphere with light, shadow, colour and mist being integral parts, the story of a torturous Baron being brought back to life via a witch’s incarnation by his only living relative serves as a backdrop to murders aplenty and menace a go-go! However atmospheric the story telling it, it cannot hide the fact that for a horror film of this ilk, and time, there is a curious lack of any serious gore and nudity which impacts on the full enjoyment of the piece. The cast give relatively good performances but are hampered, somewhat, but the dubbing. The real winner of the piece, though, is Bava’s skill behind the lens, with no pretention or superfluous elements, Baron Blood is a very simple tale told by a master of the genre.

As a Region B locked Blu-ray set Arrow have come up trumps with a full and engorging package which contains no less than three versions of the film (one of which for the very first time on disc!) The picture is as good as can be expected for a film of this vintage and budget, it’s clean, bright and detailed, but lacking any definite punch, the sound comes in a 2.0 mono LPCM flavour and is somewhat ‘thick’ lacking as it does any high end treble, but it is audible enough without any interference from hiss and crackle. Extras are plentyful, with an exhaustive audio commentary and UK exclusive interview with Ruggero Deodato and introduction by critic Alan Jones as well as the usual booklet and trailers. Worth checking out.