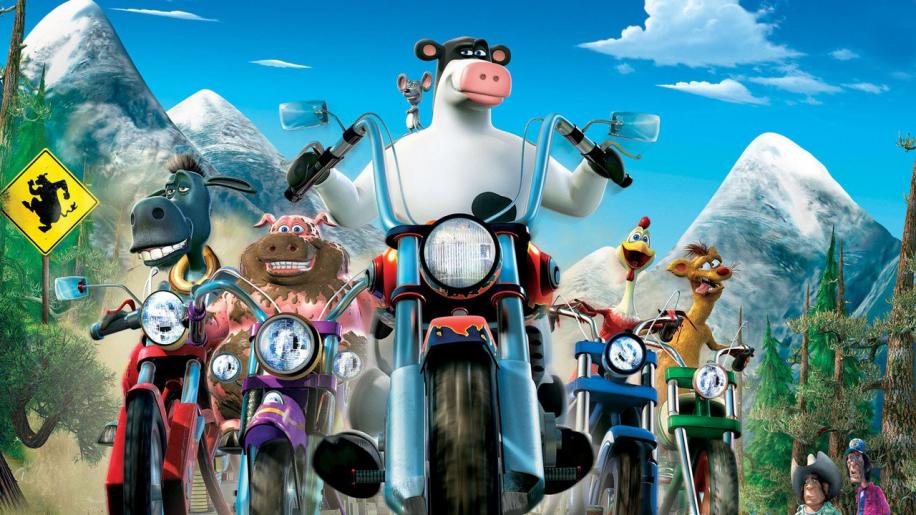 Barnyard's 1.85:1 anamorphic transfer is utterly free from digital demons such as edge enhancement, smearing, blocking or over-saturation and appears here with an image that is gloriously colourful and vibrant. As I have already mentioned, the animation seems quite broad and less intricate than, say, Pixar's work, but the effect achieved with this film on disc is simply mesmerising - as CG animation should look, in fact. The cartoony quality of the artwork is beautifully rendered with rich, eyeball-massaging colour, wonderful depth of field and a totally smooth presentation of the fast-action and madcap antics that smother every inch of the screen.

Detail is surprisingly finite too, considering the broad brushstrokes that the film seems to have been painted in. The grasses of the meadows, the foliage on the trees, particularly that seen overhanging the old watch-tree on the hill, and the star-studded night skies have a pin-sharp clarity that has them pronounced so vividly that they almost resemble 3D. Again, the animated style of Barnyard may not be quite to the taste of some viewers, but the transfer it has been afforded with this release simply cannot be faulted. An excellent, crystal-clear image that brings the screen to life. The film's DD 5.1 mix is fairly typical of family-friendly fare. Well-presented across the front speakers - with an agreeable sense of depth and steerage - the rears are largely redundant and the mix sounds toned down into the easy-listening comfort-zone, the one that even the grandparents can feel involved in without having to curse any undue bombastics, or cardiac-arrest-inducing surround action. The riotous soundtrack comes over well, however, with clear, tub-thumping musical cues and a lively degree of voices and effects, and the film certainly finds a strong and entertaining audio presence with a track that is perpetually active, even if it doesn't frequently involve whip-around directionality. For what many considered to be a lesser-release, Barnyard comes equipped with a quite a few special features.

Besides a very jovial group commentary headed-up by Steve Oedekerk - and a couple who appear to be phoning in their contributions - the disc gives us a selection of seven deleted scenes, a couple of music videos and a handful of small featurettes that take a playful, kid-orientated look at the animation process and the production of this particular film. What is nice about all this is the sense of fun that comes across. Nothing is taken too seriously, and none of it outstays its welcome. You can get through this lot - barring the commentary, of course - in not much more than half an hour, and the end result is still pretty effective.

The deleted scenes run for 9.41 mins with a Play All and have an optional commentary from the same crew as the main chat track. Some of these are good fun, though the animation is often very rough and unfinished, with some just being sketches.

The music videos are for the Barnyard Bop - which is just the animal gang performing an impromptu jamming session. The Mud Music Video is a studio recording session of the North Mississippi Allstars - who acted as the Barnyard house band - intercut with plentiful clips from the film.

Boogying In The Barn (5.24 mins) is an apt featurette covering the musical choices that the director made for the film. And here we get to meet the North Mississippi Allstars as they discuss their influences and style - which is a delirious combination of country, rock 'n' roll, bass-beat, boogie-woogie, gospel and blues. Infectious, tub-thumping, toe-tapping stuff.

Utter Talent - The Voices Of Barynard (10.35 mins) has input from the main vocal cast of the film as they discuss their characters and, basically, send themselves and their director up. With contributions from Andie MacDowell, Wanda Sykes, Courtney Cox, Sam Elliott and Kevin James, this brief doc gets points for actually having the stars involved. I still can't believe that The Incredibles dropped the ball in this department.

An Animator's Life (12.20 mins) is pretty much the type of CG film background that we've all seen a million times by now and follows the same course of showing us rough sketches, CG design work for characters, detail and lighting. The difference is that this is so light and frothy, and un-bogged-down with its own unique style, that it does exactly what it sets out to do with a sense of humour and never gets the chance to become boring, or overly familiar to the thousands of other CG making-ofs.

Method Acting With Kevin James (2.02 mins) is a bit daft, really. James meets some real cows and gets down-on-the-dairy details to find his character and the correct moo-tivation. (My joke, folks ... not his!)

Then, to round things off, we have the theatrical trailer, a Nick-On-Air Campaign, the Barnyard THQ game preview and some DVD-Rom gubbins. Oh, and some previews for Charlotte's Web, Over The Hedge, Nacho Libre and the Barnyard TV show. An overlooked gem that is perfect for Christmas. Maybe it just caught me in the right mood, but I loved every minute of this, folks. A couple of moments made me laugh out loud and I found the animation, whilst simple, an absolute joy to behold. The morals are obvious and the story treads a very familiar path, but the characters are what makes Barnyard so special. Otis and Ben are cut from the western genre of Sheriff and Deputy and Dag is a visual delight. The fun is well-balanced with a tale of redemption and the whole depiction of a secret barnyard society is marvellously drawn and effortlessly entertaining.

The disc has a virtually flawless transfer that beams with gloss and colour and the extras are quite decent without overstepping the mark and straying into the geeky technical side of things. A fun day at the farm and well recommended.