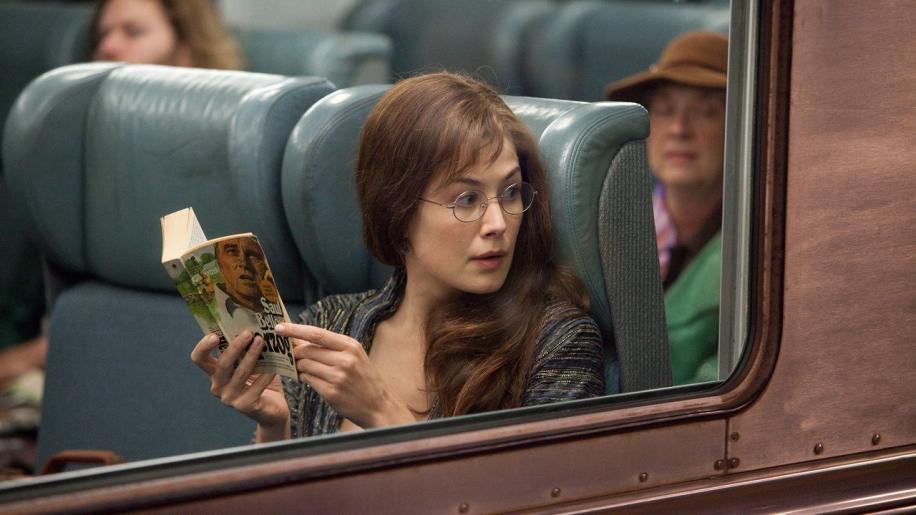 For the second time in a month, I’ve been hooked by a movie trailer and guess what? The film has turned out to be every bit as good as I’ve been led to believe. I just don’t know what’s going on in the world any more. Surely this isn’t the way it’s meant to be? The first time was with the wonderful French animation ‘The Illusionist’ and now ‘Barney’s Version’ comes to UK Region free Blu-ray a month earlier than the American release.

Caution born of having my fingers burnt on previous occasions told me that just because a movie has a great cast including Paul Giamatti, Dustin Hoffman, Minnie Driver and Rosamund Pike doesn’t automatically make it a sure fire winner. Just because the trailer has a few funny moments and an interesting premise doesn’t mean that a ham fisted director hasn’t truly mucked it up. How unusual to have your fears quashed by a film that scores on so many fronts. ‘Barney’s Version’ is witty, intelligent, warm, poignant, funny – and many other things that we normally wouldn’t associate with mass produced Hollywood product.

So, you’re asking yourself just who is Paul Giamatti? Many might consider him a character actor with a face that you recognize when you see it, but not so much the name. He’s been in ‘Sideways’ and ‘Saving Private Ryan’ – but one thing’s for certain, after you’ve seen his performance in ‘Barney’s Version’ you’ll remember him as he’s already picked up a Golden Globe Best Actor award for his work here.

Okay, enough of the enthusing already – what’s it all about? Barney Panofsky (Paul Giamatti) isn’t what you’d call conventionally good looking. He’s the kind of guy who sits alone at a bar, drinking and smoking a cigar while watching hockey on TV – rather than be with his wife on occasions that matter to her. He has the knack of offending people without really trying and his consideration for other people’s feelings tends towards zero. As a result of this he has had three marriages and his self centred behaviour can’t really be ignored for their failure. On top of this, there’s a cop (played by our own Mark Addy) who’s convinced that Barney killed his own best friend and has written a book on the subject. This is just the tip of the iceberg.

The story is told in flashback after an opening where Barney is presented with a copy of the book in a bar by the cop, Detective O’Hearne. After crushing peanuts between the pages of the book, Barney informs the cop that he “could use a mint.” We flashback to see Barney’s Wedding in Rome to his unstable first wife Clara (Rachelle Lefevre) mostly due to the fact that he got her pregnant - and the ceremony where the Priest can’t pronounce Panofsky is quite amusing. It’s even funnier when Barney doesn’t know his future wife’s surname – only to be told that it’s Charnovsky and the result of a previous marriage to a Russian gangster. When his first marriage ends abruptly, Barney meets a Jewish American Princess ‘The Second Mrs P’ (Minnie Driver) who could probably win the award for most irritating woman and you can understand his reluctance to spend time with her later on. There’s instant class distinction between Barney’s working class retired cop father Izzy, played with great gusto by Dustin Hoffman, and his bride’s well off parents. The wedding is a hoot, with Hoffman regaling his new Jewish family with grisly and earthy tales of his time on the Force.

Now here’s the premise that really hooked me, at his wedding Barney meets the true love of his life, Miriam – played with a serene, ethereal beauty by Rosamund Pike not to mention a very credible American accent. As Miriam takes her seat on the train back to New York, she’s astonished to be joined by Barney who suggests they elope together. Naturally, she’s a woman of good breeding and rebuffs his suggestion – only to receive a bouquet of red roses from Barney every week thereafter.

On a trip to their lakeside luxury cabin, Barney catches his wife testing the bedsprings with his best friend, Boogie (Scott Freeman) which gives him much wanted grounds for divorce. As he and Boogie indulge in a drunken argument, Barney’s handgun goes off and Boogie falls in the Lake. When Barney comes round, he calls the Police and despite a confession there’s just one problem – they can’t find the body!

Free from the annoying Ms Driver at last, Barney is now able to woo and marry the lovely Miriam. His attempts at conversation on their meeting in a restaurant are interrupted as he parts company with his lunch. Most women would get up and walk out but Miriam isn’t phased by it and she looks after him. He’s found his true love at last – but will he marry her and live happily ever after or will he louse it up as usual? While this all might sound episodic, it actually flows rather well with a good script by Michael Konyves and compelling performances all round – not least of which is the entirely believable Mr Giamatti. I had one basic problem however in believing that a lady as beautiful as Miriam would fall for Barney, who is after all, a slob. I guess it helped that he was a rich TV producer. I’ve purposefully not revealed the ending as there’s a lot more to it than you might suppose. Did he kill his best friend? Mark Addy’s cop certainly thinks so.

Adapted from the book by Mordecai Richler, the story is basically a serious one but Barney’s character provides much of the amusement due to his political incorrectness and apparent lack of concern for others. It’s not that he’s malicious or vindictive at all, it’s just something that it doesn’t dawn on him to do. The scenes between Barney and his father are superb. You forget that you’re watching two actors and become involved with the characters. The fact that Giamatti holds his own in scenes with the Oscar winning Hoffman speaks volumes with regard to his acting talent. At no point did my brain say, ‘Wow, that’s good acting.’ and that is the true test – when it is just so natural that you don’t think it’s acting.

I’d heartily recommend ‘Barney’s Version’ to those who enjoy an entertaining story, well told by director Richard Lewis and with fine acting from a superb cast. Those who want explosions, gunfire and car chases galore might be best to look elsewhere. This is an intelligent film that deserves to be seen by a large audience. Watch it tonight.