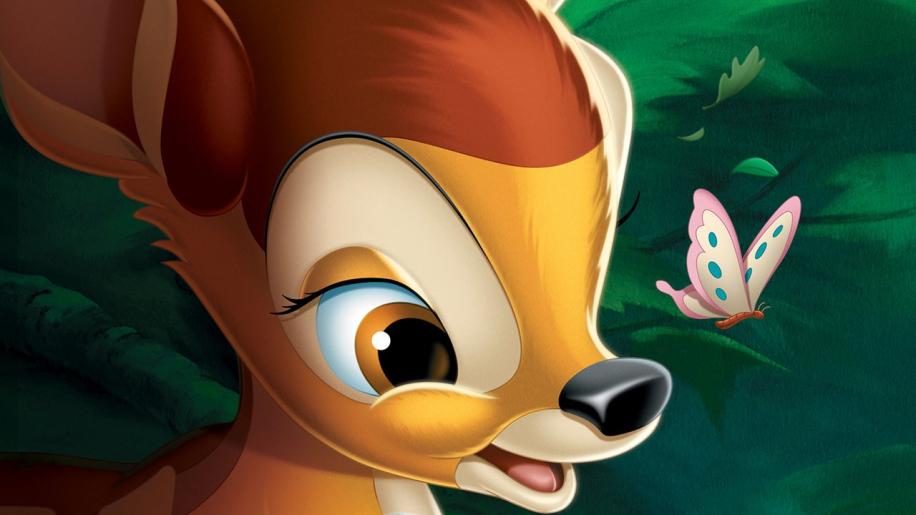 The Picture is presented in its original theatrical aspect ratio of 1.33:1 and has been completely restored, gaining a THX certification in the process. This is definitely a very impressive restoration job indeed.

What is particularly satisfying about this transfer is that it never looks “false”. By that, I mean they haven't cleaned all the imperfections out of it, making it look modern and too sharp. The colours have been completely redone, and I do not know the film well enough to know how faithful to the original the colour palette is, but it is certainly impressive. The amazing fight between Bambi and another adult stag is a perfect example of this, looking vibrant and colourful, yet always looking like a 1940's piece of animation.

The backgrounds lack the 3d pop of more modern animation, but the level of detail that the transfer brings out is excellent. There is no visible artefacting on the transfer, and some grain is retained to give it that more natural look.

It is refreshing to see a restoration job that is carried out with so much respect to the original transfer, and this is far better in my opinion than the other transfers from the era Dumbo (1941) and Fantasia (1940). This release has a Disney Enhanced Home Theatre sound mix, which past experience has shown me can be excellent, as evident on “The Lion King”. However, in this instance the sound designers are, of course, working from an original mono track. The result of this is that there is little dynamism about the track. The design tends to see the music coming out of the four surround speakers simultaneously, with the dialogue coming from the centre. There is very little separation, and very little use of direction. Of course, if they had tried to be too radical with the sound design then they would have been criticised, so this is probably the ideal compromise for the 5.1 mix. It is certainly not reference, however.
Thankfully, the original mono mix has been included. Information I have found on the web tells me that this has also been remixed, but with as much care and attention as the picture. I have been unable to confirm this, but purists will certainly choose this option and be very glad it is there. Disc one contains a fascinating extra feature “Inside Walt's Story Meetings”. This extra, presented by Patrick Stewart, draws on transcripts that Disney himself had made of every creative meeting during the making of the film. The film is shown in its entirety but is accompanied with audio featuring actors reading the notes from the story meetings. These are also accompanied with production art, sketches, and original documents from the time.

A lot of work has gone into this extra and it is a truly fascinating dip into Disney archives, giving an illuminating insight into the making of the film. Some have bemoaned the lack of a pure audio commentary - but really full marks should go to Disney for producing an extra that is not only, in my opinion, unique but also something that would have taken a lot to put together.

The deleted scenes are not quite what the title promises. The scenes were storyboarded but not filmed, so what we have are fairly rudimentary reconstructions of what the scenes may have looked like. There are two of these scenes, and one is merely an alternative take of a scene that is in the movie anyway - Bambi's first snow.

Games and activities are exactly what you would expect from the description. A selection of games for (very young) children presented in 5.1. I accept that I am not the target audience for these extras, but for the sake of completeness I had a go at them. Personally, I did not think they were as well put together or as expansive as the examples on some of the other Disney discs. But I do lack a child of the right age to test them properly for me.

The third section “Backstage Disney” contains the meat and potatoes of this package - and an excellent dish they are too.

We begin with “The Making of Bambi : A Prince is Born” - a 53 minute documentary that can either be watched in its entirety or in six featurettes. We learn more about the comparisons with “The Lion King (1994)” and there are also featurettes on the background art, the voices, the animation, and the score. There are some absolute gems in this documentary, and we get to hear from several people who actually worked on the film all those years ago. This is an exhaustive, if slightly overwhelming documentary, that complements the Story Meetings extra well.

Patrick Stewart then returns for a short five minute documentary on the restoration of the film, and then we get a 5 minute promo piece for DTV sequel Bambi : Prince of the Forest. Disney time capsule is a fascinating, but far too short (5 minutes) documentary placing the film into its 1942 context.

The extras package is rounded off with a 1937 “Silly Symphony” short which pioneered some of the techniques later used in Bambi, and an excerpt from “Tricks of the Trade” illustrating the use of the multi-plane camera. We are also presented with image galleries and a trailer.Bambi is an acknowledged classic of animation that deserves a place in every film fan's collection. It may be a little slow paced by modern standards, but the languidness of this study of character and nature is well served by a respectful and careful restoration. Add in a truly fascinating, if not quite comprehensive, extras package and you have a highly recommended disc.