Good times in native 4K with HDR10+ and Atmos too 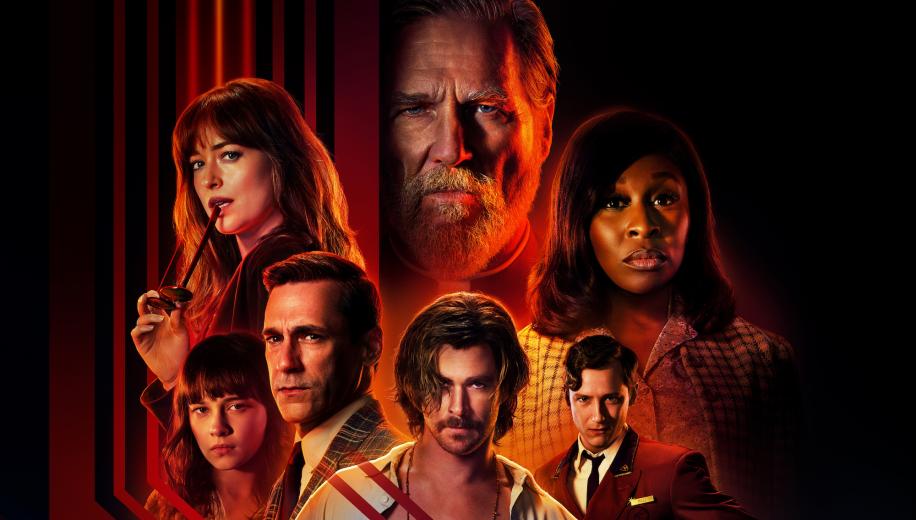 A great little throwback to the multi-narrative movies of the 90s borne from Tarantino's style, Drew 'Cabin in the Woods' Goddard's latest has one ace up its sleeve: mystery.

Drew Goddard, of Cabin in the Woods fame, has crafted an equally unpredictable little multi-hander which is a love letter of sorts to the Tarantino movies of old (and new, like The Hateful Eight), and to all the films of varying quality which attempted to follow suit. Whilst it doesn't quite hit the memorable notes of those Tarantino greats - lacking the razor-sharp banter and not achieving the same level of unbearable tension, it does make for one hell of a mystery, where basically anybody could get killed at any moment.

The story has a diverse group of strangers converge at a shady motel which sits on the Nevada/California border. There's Jeff Bridges' preacher, Jon Hamm's salesman, Dakota Johnson's hippie, and Cynthia Erivo, who everybody assumes is a prostitute. However, nobody is who they seem, with a hidden bag of money, a bunch of two-way mirrors, a cult leader and the FBI all coming together on one fateful, bloody night.

Knowing as little as possible about this movie is a benefit although, to be fair, it's kind of hard to give anything away - it's a superior mystery in that respect. Sure, as with a lot of those 90s entries which weren't Tarantino, there's no substantial depth to this tale of warring miscreants, but the film still affords viewers two plus hours of great entertainment.


Whilst it doesn't quite hit the memorable notes of those Tarantino greats, it does make for one hell of a mystery

But there's no denying the worth of a decent mystery, with the electric, eclectic bunch of familiar faces all engaging with their multiple personalities, convincing in every aspect of this game of who am I? Hamm (recently great in a rare lead as The Negotiator) steals the show early on, whilst Dakota Johnson blows away some of the painful memories of her 150 Shades, with Hemsworth escaping Thor-dom by going full Jim Morrison and Jeff Bridges (who hasn't been this good since Hell or High Water) chewing everybody off the screen. It's relative newcomer Cynthia Erivo (also a scene-stealer in Widows) who provides the beating heart and wounded soul of the piece, however, with a voice to die for. Now she's someone who should go on your radar right now, if she wasn't already.

For as much as Tarantino's name gets mentioned repeatedly, Bad Times at the El Royale is also reminiscent of another curious little 90s mystery noir, Two Days in the Valley. Clearly, this is the kind of thing Goddard was going for, although his fondness for a more horror-esque vibe smacks more of Identity, or his earlier work Cabin in the Woods. Certainly, those who enjoyed Cabin should lap this up; for a writer/director who has his name all over a bunch of high profile titles (Buffy, World War Z, The Martian, the Cloverfield movies and Deadpool 2), it's strange to think that this is only his second directorial effort. For a sophomore writer/director feature, it's pretty damn good; it's got style and it's got swagger, and it's well worth checking out.

Bad Times at the El Royale benefits from the still-rare exception to the rule that is a 4K Digital Intermediate, leaving this a full fat native 4K presentation looking pleasantly impressive on this Ultra HD Blu-ray release.

The 4K release showcases a nice little uptick in detail above its 1080p sibling, enjoying the benefits of the native 4K presentation and lapping up the nuances of the production. Indeed Goddard's film is a gorgeous production, enjoying a luxurious setting and set design, revelling in the period stylisation and 70s feel, with some rich and opulent tones. Gold, burgundy, and brown tones abound, with some glowing signage too, and there are very few shortcomings in motion, with the colour scheme afforded wondrous depth and breadth, and black levels looking excellent. If there's any minor criticism, it's from the slightly variable grain levels, but that's a minimal complaint on what is a largely demo presentation.

The accompanying soundtrack gets the full HD 3D immersive audio treatment in the form of Dolby Atmos, providing an intoxicating blend of 'live' pieces (which are simply beautiful), background period tracks, and suitably thematic scoring which are all highlights in this excellent track.

Dialogue remains firmly prioritised across the frontal array, from Bridges' gravelly mumbling to Cynthia Erivo's dulcet tones. Effects can be rather surprisingly devastating, from an early shock shotgun blast to some latter thunderous gunshots, particularly set against the creepy backroom corridors and mystery feel of the piece. It's the score and soundtrack that really stands out though, defining the release and given interesting and innovative presentation here, particularly with the blend of diegetic and non-diegetic pieces. Perhaps an unlikely source of demo material, Bad Times at the El Royale sounds absolutely superb.

For a sophomore writer/director feature, it's pretty damn good; it's got style and it's got swagger, and it's worth checking out

Bad Times at the El Royale enjoys a largely excellent presentation, both on the video and aural front - with the first implementation of the new open-source Dolby Vision alternative, HDR10+, as well as Dolby Atmos too - and even the nominal selection of extras can't prevent this from being an excellent release for fans to pick up.