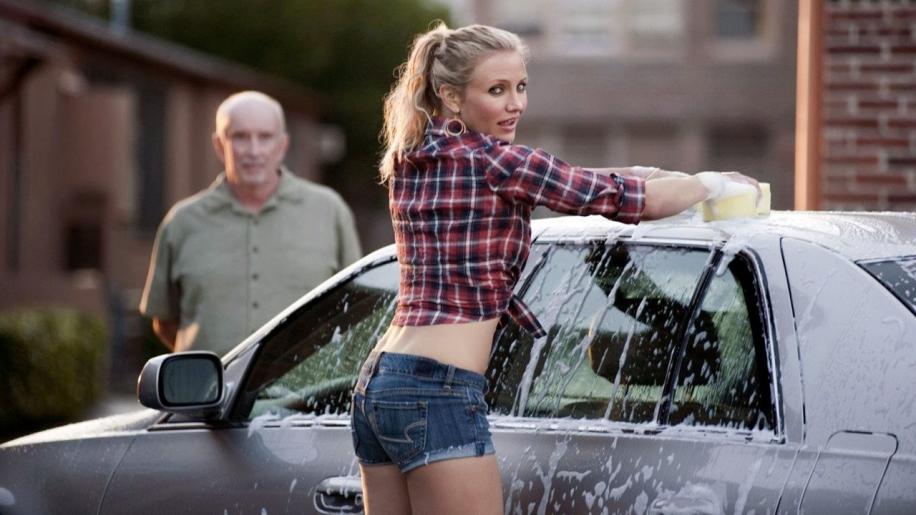 What’s a girl to do with herself? Ageing has always been tougher on women than men. Men can grow old and gain stature and presence, become silver foxes, or just be told that they are 'gaining more character' as the lines crumple up their faces. Women don’t fare quite so well. In Hollywood, age is even more significant, with men graduating into the kinds of roles that are more appropriate for their age, but seldom (even if you’re an action star) actually getting too old to take substantial parts in movies. Women find the choice roles run thin with age; even the best actresses don’t get all that many leading roles when they are young, let along as they get older. Of course it’s even harder when you are known for doing romantic comedies, or known for your beauty – what happens when you no longer make for a convincing romantic lead?

At just 21 Cameron Diaz was catapulted into superstardom, and made into something of an international sex symbol, thanks to her prominent role in Jim Carrey’s The Mask. It was 1994. Over the subsequent decade she cemented her standing as a major female player in Hollywood with a series of successes including There’s Something About Mary and the Charlie’s Angels films, all the while trying to reinforce her standing as a potential ‘serious’ actress with smaller parts in more serious films like Being John Malkovich, Gangs of New York and Vanilla Sky, where she often played against-type to further highlight her broader talents. Reaching her mid-thirties saw her focus more on some more serious roles – following the frivolous What Happens in Vegas with a one-two punch of dramatic turns in The Box and the tragic My Sister’s Keeper. However, now, all of a sudden, she appears to have done a complete u-turn, returning to fun and frivolous – a perpetual grin over her slightly strange-looking lips (Is that plastic surgery? Is that botox?) – and giving us the underrated flop Knight and Day, the lacklustre The Green Hornet and, this, the latest in the new trend of R-Rated rom-coms, Bad Teacher. Pushing 40, does she still have what it takes to be a sexy, sassy, romantic lead?

Elizabeth Halsey just wants to be rich, and not have to do much to achieve it. Leaving her job as a teacher to marry a rich husband so that she can spend all of his money frivolously, it’s only his mother who discovers the truth and persuades the man to see the light – mostly as a result of the fact that Elizabeth can’t even remember her fiancé’s birthday. Jilted and broke, she returns to school to cruise through another boring term playing movies (about teachers) to her classes whilst she sleeps off her hangovers. She takes drugs on campus, swears like a trooper, and uses her sexuality to persuade just about any male staff member (especially the headmaster) to excuse any shortcomings that she might have. Her latest mission is to get breast enhancements, and use them on her latest target, the new teacher at school: a dorky, badly-dressed, but extremely rich maths professor. She will do whatever it takes to achieve her goal: take bribes from parents in return for giving their children higher grades, steal the money from the kids’ carwash fund, or even seduce the head of the exam board to get an insider look at the upcoming test paper so that she can cheat her way towards the teacher’s bonus. If you can think of all the worst things that a teacher could do – short of sleeping with her 12-year-old pupils – then Elizabeth does them. She is a bad teacher.

It should be noted that this is a wholly unrelated project to the 2007 Billy Bob Thornton comedy, Bad Santa; it comes from regular writers on the US version of The Office, and is directed by the guy who did the little-known comedy Orange County (featuring Jack Black). That said, one can see the easy correlations between Bad Teacher and Bad Santa, not least in the names, but also in the simple premise of portraying a near-despicable lead character who is the absolute worst-of-the-worst at their job, and who, over the course of the narrative, will somehow undergo something of a change in spirit. Hopefully.

The trouble is that Bad Teacher does not work. And the fault basically boils down to the fact that there are almost no likeable characters. There’s the odd co-teacher, who is far too ‘positive’ and does ridiculous things like have cutesy conversations with an apple in front of her class, or announce her lessons with a loudspeaker as if she is an airline stewardess; there’s the pliable, soft headmaster who lets everybody walk all over him; there’s the bland, geeky new guy who has terrible dress-sense, cracks awful jokes and dances like an idiot; and then there are the kids themselves, massive stereotypes, who are all unbelievably eccentric: the prissy vain blonde girl; the teacher’s pet / junior version of Hillary Clinton; the socially inept ‘sensitive kid’; the chubby thuggish bully...etc. etc.

Then we have Cameron Diaz. Credit to the woman for playing a fairly cringeworthy, daring, against-type role – but unfortunately, she feels just that little bit too old for this kind of part. Oddly, she was great in Knight and Day, but it wasn’t a role that necessarily required somebody young. Here it just doesn’t seem quite natural for her to be trying to pick up rich twentysomething men in bars; or assuming she can use her body to get any man she wants to do anything – don’t get me wrong, she looks gorgeous for her age, but she’s still pushing 40, and it certainly shows on her facial close-ups. It’s also not conceivable that her character would still be taking this course of action in life – she’d either be already long hitched to somebody rich, or she’d have buried herself in a bottle of alcohol by now. Of course it does not help that the character is so utterly and relentlessly unlikeable as a person. And when you’ve got a cast of characters who are equally odd; equally hard to like, then who are you left to side with.

Indeed the only person who appears to make it through this more-miss-than-hit R-rated comedy with their credibility intact is Jason Segel. You might remember him as a regular on the TV sitcom How I Met Your Mother; his cinematic success has been fairly limited (he was ok in I Love you, Man; better in Forgetting Sarah Marshall) – I don’t think he’s ever played a different character, and this is certainly no exception, playing the same guy he has always played in everything he has ever been in. Thankfully, though, he’s perfectly chosen for this particular role and, actually, you come out of the movie wishing there was more from him: he has the best lines, and the scenes between him and Cameron Diaz’s ‘bad teacher’ are the only ones where you actually like her, find her funny, and find her character really quite endearing. They have great chemistry and the shame of it all is that Segel is totally relegated to the sidelines, appearing for just a couple of scenes that basically book-end the film, with the rest of Diaz’s unfunny shenanigans (mostly involving the other, even more irritating holier-than-thou rival teacher) dominating the runtime. Ironically, for a film which tries to (and succeeds) avoid many of the usual clichéd paths of a standard rom-com, it also fails to take the one obvious path that would have actually proven funny, endearing and romantic at the same time. Sidelining the relationship between Diaz’s bad teacher and Segel’s gym teacher until we are pretty bored by the rest of the narrative, and then injecting it in as some kind of character redemption right at the end, was just a bad decision.

At the end of the day, there are moments that are funny (basically any scene involve Diaz and Segel together); there are moments that ring true (the clever parallels as Diaz slowly becomes self-aware – whilst giving advice to one of the more ‘sensitive’ boys, who has a crush on the class beauty), and there are a few surprises in store (I certainly didn’t expect the teacher rivalry to end like this), but there’s far too much that falls flat; far too much time spent with painful-to-endure side-characters (like the goofy Justin Timberlake, who is a bit too convincing for his own credibility), and not enough time spent redeeming the lead character. This makes her journey much harder to endure, and consequently devalues the film somewhat (even in its extended ‘School’s Out Edition’, which is a 5-minute longer edition with nothing more excessive than what’s already in the film, and nothing which really improves it either). Bad Teacher is not a disaster, but it is something of a disappointment, a pretty average comedy which foolishly does not play to its strengths, and thus misses the opportunity to be as great as the premise allows for.