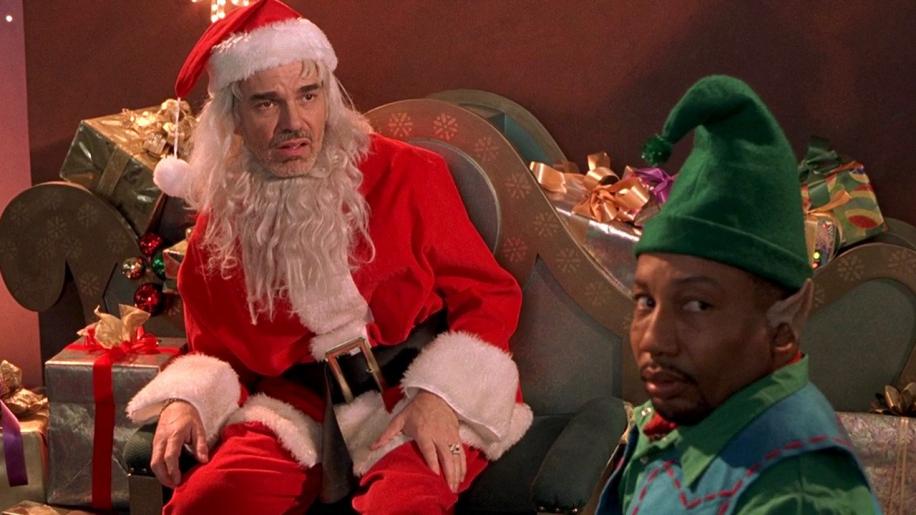 Willie Stokes (Billy Bob Thornton) is a bad Santa. In fact he is a very bad Santa. He breaks all the rules in the Santa book. He hates kids, he smokes on duty, he is a potty-mouthed alcoholic, and he fraternises in a biblical sense with the ladies, while dressed in his Santa outfit, with a preference for the back door of big boned ladies, if you get my drift. But he and his vertically challenged partner Marcus (Tony Cox) care little for their day jobs, you see they use the Santa/Elf ploy to gain entry to department stores full of lovely Christmas takings, and they have been getting away with it for the last seven years. There are clouds on the horizon however, as Willie's drinking habit, and behaviour seem destined to press the self-destruct button before they can complete their current job. Further complications ensue when Willie meets a sexy barmaid with a Santa fetish, and a lonely kid who believes in Santa, and gradually starts to show Willie the error of his ways.

Badder Santa is the unrated DVD version of Bad Santa, which saw a US theatrical release in Christmas 2003 and has yet to see the big screen in the U.K. although it was passed without cuts by the BBFC in April. This could be due the seasonal nature of the movie, or the limited market for an R rated comedy, although the US box office was a respectable $60M. Director Terry Zwigoff (Ghost World) has produced an uncompromising and unrelenting black comedy. It pulls no punches with the language or the irredeemable characterisation, particularly for Willie, who is possibly the most unlikeable character on celluloid, taking every possible opportunity to rip off anyone whether friend or foe. Even his redemption has a sneering reluctance to it. Thornton works miracles with the role but does sail close to the wind on a number of occasions (eating all the chocolate in a kids advent calendar and filling the empty spaces with aspirin !) I mean we are ultimately being asked to hope this guy wins the day?

It came as no surprise to discover that the Coen brothers had the original idea for the screenplay, and executive produced the movie, as the plot, themes and dialogue owe a lot to films such as Intolerable Cruelty or the most recent Coen film The Ladykillers. This movie will not be to everybody's liking as the humour is blacker than a black cat in a coal cellar but some of it will make you laugh till your sides ache, just wait for the scene where Willie and Marcus are teaching the kid to fight. Lets just say there are no shortage of punch bags to be found at the gym.