Too many knobs and not enough gags 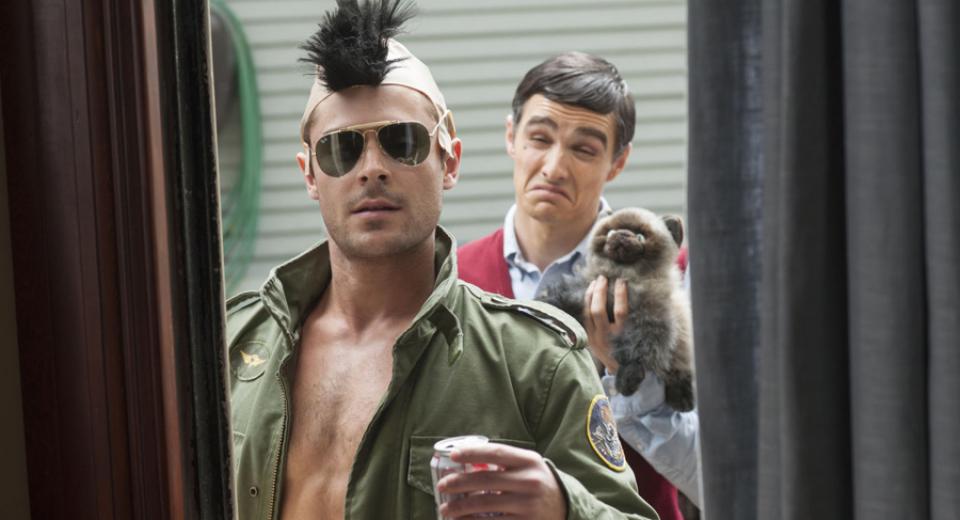 The premise for Bad Neighbours is simple - Animal House moves in next door to a young married couple and chaos ensues.

That's probably exactly how the film - called Neighbors in the US - was pitched but by centring on a fraternity house, it's almost impossible not to draw comparisons with John Landis' anarchic 1978 masterpiece. The sad fact is that Seth Rogan is no John Belushi, Zak Efron is no Tim Matheson, Nicholas Stoller is no John Landis and Andrew Cohen and Brendan O'Brien are no Ivan Reitman and Harold Ramis. Whilst Animal House was raunchy, it was also incredibly funny and had a genuine innocence that reflected the time in which it was set - the early 60s. Bad Neighbours seems to confuse raunch for comedy and actual knobs for knob gags.
In a weird way the film that Bad Neighbours most resembles is a John Belushi-Dan Aykroyd vehicle from 1981 that's also called Neighbors. In that film the roles were reversed, with Belushi playing the straight role and Aykroyd playing the obnoxious character. In Bad Neighbours, Rogan eschews his usual pot-head persona to play more of a straight role, whilst Efron, the clean-cut star of the High School Musical films, plays the raunchier character. The role-reversal didn't work for Belushi and Aykroyd but might for Rogan and Efron if early box office numbers are to be believed, although the film still feels like a wasted opportunity. The film centres around a young married couple called Mac (Rogan) and Kelly (Rose Byrne) Radner who have spent every last penny buying a dream home for them and their new-born baby Stella. Unfortunately, a fraternity (frat) moves into the house next door, headed up by Teddy (Efron) and Pete (Dave Franco, younger brother of James). Whilst initially the new neighbours get along, after a series of misunderstandings an all-out war breaks out between the two groups. The frat house feels that the Radners have betrayed their trust by calling the cops because of the noise, whilst the couple just want the fraternity to turn the music down.

So the frat begins pranking them, whilst the couple try to force the fraternity out by flooding their house. However, when the couple discover that no one will buy a house with a fraternity next door, they realise the could lose all the money they invested in their home. So they enlist their friends Jimmy (Ike Barinholtz) and Paula (Carla Gallo) to help them engineer the expulsion of the fraternity from the university. The dean of the university, played by Lisa Kudrow, has a three strikes and you're out policy and the fraternity is already on one strike. So the Radners and their friends try to come between Teddy and Pete's friendship and manipulate the fraternity into expulsion. When Teddy realises what the Radners have done he retaliates and the situation escalates.


Rogan eschews his usual pot-head persona to play the straight role, whilst Efron tries to shake his High School Musical past by being very rude.

That is essentially the plot of Bad Neighbours and it's to the writers and filmmakers credit that they never paint either side as complete villains. The Radners are struggling to come to terms with being new parents and giving up their old life of partying and are actually slightly jealous of all the fun the fraternity are having. In fact, they initially go over and get wasted with them, which establishes that the two groups could be friends. By the same token Teddy is often shown to be quite reasonable and his more extreme behaviour stems from his fear of growing up and going out into the big wide world. Both Mac and Teddy are very similar, the former is just a slightly older version, which is why the two initially get along and are so willing to escalate matters.

However, you also don't particularly like any of the characters, although the main problem with the film is that with all the talent involved, it really should be better There are some funny set pieces and some laugh-out-loud moments but, too often, the film confuses raunchiness, swearing and crudity for actual comedy and thus offends rather than amuses. We all enjoy a knob gag but there's a big difference between that and an actual knob, a difference that the filmmakers often confuse. However if you're the kind of person who finds a woman wearing a young man's unusually large penis as a necklace, then this is the film for you. Sadly, for most, the raunchiness will crowd out the good jokes and the endless ad-libbing often misses the mark; whilst it's annoying that some of the best sight gags are ruined by being in the film's trailer. The film was written by first-timers Andrew J. Cohen and Brendan O'Brien but a lot of it feels like pure Seth Rogan, suggesting he either had a hand in the script or ad-libbed a lot of dialogue on the set. The film was directed by Nicholas Stoller who previously helmed Forgetting Sarah Marshall, Get Him to the Greek and The Five-Year Engagement; and a lot of those involved are either friends in real life or orbit in the Judd Apatow cinematic universe. As a result, an actor like Christopher Mintz-Plasse has a very minor role, with no memorable moments except the previously mentioned phallic jewellery. As for Efron and Rogan, they both seem very keen to get their shirts off, which in the case of the former makes more sense. As for the latter, he clearly hasn't continued the training regime he was on for his role in The Green Hornet.

The film was originally titled Townies, which makes sense as that is often how students refer to people who actually live in the town or city where their university is situated. The US title loses some of that subtlety, if that word could ever be used to describe this film, and by choosing the title Neighbors it created a problem for itself in the UK and Australia far beyond that of a difference in spelling. In order to avoid confusion with the Aussie soap opera, the film's title was changed to Bad Neighbours here and in Oz. That's a shame because it would have made the film considerably funnier if you could watch shocked 'Neighbours' fans walk out as the screen filled up with swearing and lewd behaviour.


The film confuses what actually constitutes a knob gag but if you think a woman wearing a penis as a necklace is funny, then this is the film for you.

The film has also gained a certain amount of criticism in the UK for its rather sneaky release strategy. Whilst it officially opened on a Friday, as all films do in the UK, it started preview screenings the previous Saturday. Since these preview screening count towards the film's opening weekend numbers, that means Bad Neighbours opening 'weekend' lasted nine days. Now that's the kind of prank of which the film's frat boys would be proud.

Whilst Bad Neighbours ultimately works as a comedy, it feels like a wasted opportunity. When you consider the comic potential of the central premise and the talent of all those involved, it really should be funnier.