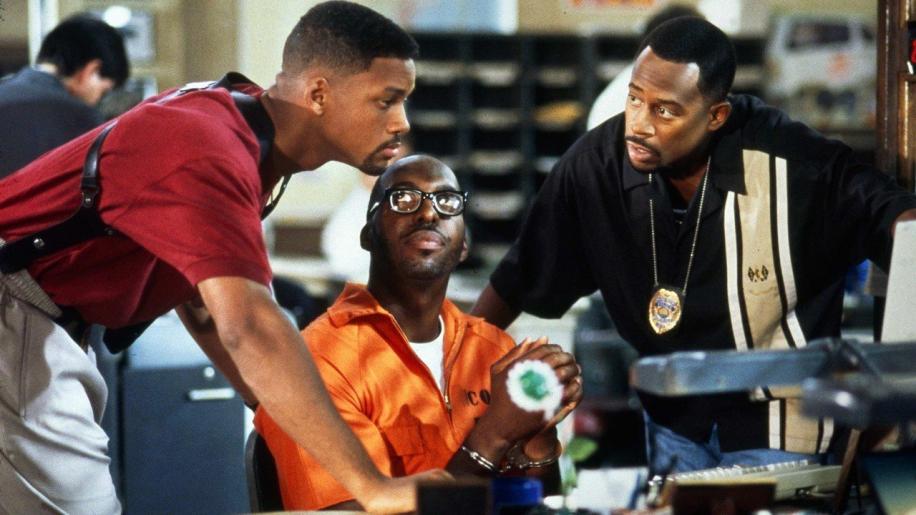 First he was a rapper named the Fresh Prince. Then he became the Fresh Prince of Bel Air. Just a popular character on a popular post-schooltime TV show, and still more famous as 'the Fresh Prince' than really known for his real name. That was some twenty years ago. Fifteen years ago, right at the tail-end of his stint on this comedy show, he partnered with fellow TV-comedian-turned-semi-comic-actor Martin Lawrence to do a fairly low-budget buddy-buddy action thriller. It was probably pitched as something like Lethal Weapon on speed.
Lawrence was arguably already a known commodity on the movie scene, with half a dozen titles under his belt. Smith was known for his quick-wittedness and charisma. The team behind the production were the crew behind the likes of Top Gun and Beverly Hills cop, Jerry Bruckheimer and the late Don Simpson. They hired first-time Director Michael Bay to do the shoot on what was a fairly flimsy and unoriginal story. And between some stylish direction, plenty of witty improvisation from the two leads and a fair amount of action, the end result was a hit that kick-started the careers of both Will "no longer the Fresh Prince" Smith and Michael Bay, who have both gone on to become massive players in the film industry. And it all started here.
“I bet when your punk ass woke up this morning you didn't think by 5 o'clock you'd have a hole in your leg.”
Miami Detectives Mike Lowrey (Will Smith) and Marcus Burnett (Martin Lawrence) are best friends and cop partners who appear to be in a perpetual love/hate cycle that involves them bitching at each other almost as much as they back each other up. Mike is the wise-cracking rich trust-fund playboy who secretly just wants to be a good cop, Marcus is the struggling family-man who doesn't respect Mike attitude to the job and basically wants to just get home alive.
When a French drug kingpin named Fouchet (Tcheky Karyo) executes an elaborate heist from a secure police vault and steals some $100 Million in heroin, the whole department goes under the scrutiny of Internal Affairs and - with 72 hours on the clock - it falls upon the dynamic, volatile cop duo to save the day. This entails keeping their one and only witness alive (Tea Leoni) and also ensuring that she is willing to testify, to which end the partners are forced in swap identities, causing much chaos to their home lives, and pushing their relationship to breaking point. Will Mike and Marcus put aside their differences to catch the bad guy and save the girl, or will they end up just shooting each other?

At the time of its making, the Bad Boys formula had already been done a number of times before, and better. Its clichéd dialogue, stereotyped characters and over-the-top action sequences were all marks of a classic buddy-buddy action-thriller. Really the definitive entry in the genre has to be Lethal Weapon. Bad Boys, however, had two great components, who both worked together to make for an unstoppably successful aspect of the film (and its sequel) - Will Smith and Martin Lawrence's relationship.
'You know, you drive almost slow enough to drive Miss Daisy.'
The camaraderie, the banter, the improvised lines and the confrontations, it is all pitch-perfect. You feel like these two actors were made to work together, and thus you buy the setup that they are lifelong friends and veteran partners, a duo whose love/hate relationship story arc is much more interesting than the formulaic main plot about the drug dealer and the missing heroin. You don't watch this film for the plot; you watch it for every single scene where Smith and Lawrence get to mouth off, whether at each other or at their bosses, at their love interests or even at the bad guys. Their dialogue is immensely quotable, the whole movie amounting to a rollercoaster ride peppered with cool, quick repartee, a thumping, perfectly suited score and a plethora of stylish, larger-than-life action scenes.
That's not to say the movie is perfect. It is still cheesy and predictable as hell, the shouting boss one of the more tiring clichés (despite the fact that Joe 'Memento' Pantoliano does his best to inject something new into the mix), and Tea Leoni truly awful as the grating heroine Julie, perpetually complaining and getting herself into no end of trouble. Seriously, you often wish, despite the fact that she wears some hot-as-hell outfits, that she would just get shot, or at least put into a coma for the duration. Nikita's Tchecky Karyo hams it up as the villain, and you either love him or you hate him. I'll always forgive the man his paycheque roles, and I like him here, but he certainly does not particularly offer anything new to the mix, although he does get to spend a quality amount of time cutting into his useless lackeys, which often involves him reaching in real close and shouting the word 'idiot' in his heavy French accent at them.
Similarly the Director Michael Bay marks both a plus and minus aspect of the movie. Those who think his latest blockbusters have been that little bit too style-heavy, with too much frantic camera-work and mad angles, will be pleased to know that, back on this - his first movie - he is still perfecting his 'style'. This means that the film is actually surprisingly well directed, Bay not really going over the top at all, his work-in-progress style actually working wonders on the minimal $18 Million budget and making the movie look much more glossy and flashy than the price tag would otherwise dictate. The flipside, of course, is that it's still a Michael Bay movie, and if you don't like his approach (largely style over substance) then, even with the dial turned right down, his directing effort here is not going to appeal to you.
If you want to take a critical eye and pick holes in this movie, then it will not take long to tear it to pieces. It is not designed to stand up to any kind of scrutiny whatsoever. And yet it probably ranks in my top fifty movies of all time. Why? Because of Will Smith and Martin Lawrence, their great chemistry, teamwork and dialogue. You can forgive the clichés and overlook the flaws purely off the back of their performances. And you can ride the high. Will Smith might have gone on to do bigger, better and more meaty, Oscar-worthy roles, but he cut his debut acting teeth on Bad Boys, and his fresh talent is on show throughout. And it really is no wonder that, despite his lack of success at either going it solo or partnering up with other actors, the high point of Lawrence's career since the first instalment was, well, the second instalment. He really is the irreplaceable other half of a fantastic partnership, and I hope Bay and Smith manage to get their dates organised so that they can all return for a third part. B-movies don't get much more A-rated than this.
“Now back up, put the gun down and give me a packet of Tropical Fruit Bubblicious...And some Skittles.”