Bigger and badder but not necessarily better. Whatcha’ Gonna’ Do? 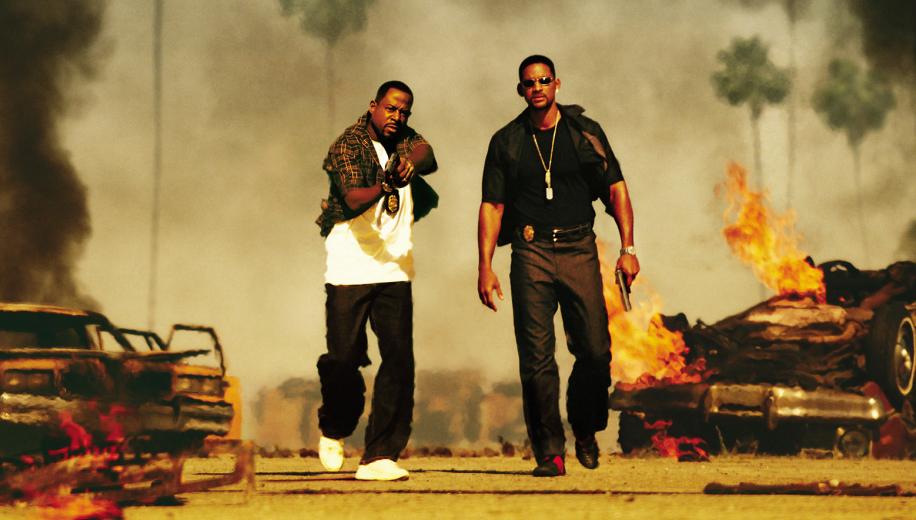 Bloated and blunt, Bay’s blockbuster beast of a sequel lost much of the fresh appeal that made the first outing so much fun, but nevertheless proved that more from these Bad Boys was certainly welcome.

1995’s hit Bad Boys marked the birth of a little-known director called Michael Bay; a comparatively low budget cop actioner shot with frenzied style and a couple of upcoming leads whose great chemistry and improvisational panache left it one of the funniest buddy-buddy thrillers of its ilk.

Considering its monumental success – which sparked the rise of not only Bay himself but also the man formerly known as the Fresh Prince, Will Smith – it was somewhat surprising that it took quite so long for them all to get around to a sequel, 2003’s Bad Boys II (although nowhere near as long as the 17 years between that and the long-gestating, supposedly upcoming third film in 2020).

Bigger, louder, with more ‘splosions, the second certainly followed Bay’s trademark formula for sequels, with the now-power-player director a long way away from caring about little things like scripts or stories.

Two things worked in the film’s favour however – Bay’s eye for grand effects left some of the key action sequences amidst the most spectacular in the genre (the car chase), and the reunion of the two leads still proved that they remained amidst the best on-screen buddy-buddy cop partners in the genre. Indeed Smith and Lawrence keep the bloated Big Screen blockbuster engaging in spite of its undeniable shortcomings.

For such an obvious candidate to be made into a demo title Bad Boys II took an inordinately long time to make it to Blu-ray, hitting the format a decade late, admittedly looking spectacular in all of its 4K remastered glory, but also way too late considering that the new 4K format was already available by that stage. Nonetheless, as with the first film, Sony's 'Mastered in 4K' prep-work was a clever business decision, allowing them two bites of the same cherry, as they have clearly used the same 4K remaster as the basis for the unsurprisingly impressive native 4K presentation on this Ultra HD Blu-ray.


Although both are easy demo and reference releases, Bad Boys II still has the slight edge over its predecessor

Although Michael Bay steeps his production in all of the trappings you would expect from the wide-eyed fast-editing director (not wholly unlikely the late Tony Scott), this full-fat 4K presentation takes the already faithful and utterly demo-worthy Blu-ray image and improves it in every single way imaginable.

Detail was outstanding before, and even better here, lapping up skin textures, background environmental tweaks, and clothing design, delivering supreme clarity throughout. There's a fine layer of grain, with Bay's high contrast style running hot, but this is a more glossy successor to the first outing, with the director playing with about seven times' the budget he had for his relatively low budget debut, and every bit of that on display in this fast and furious blockbuster.

The presentation laps up the high contrast over-stylisation and revels in the expertly staged Big Screen chaos. HDR and WCG further redefine the impressiveness of this presentation too. Primaries pop vividly with rich definition, whilst black levels are richer and deeper than ever, delivering impressive shadow detail and fantastic integrity that even bests the already excellent Blu-ray. Although both are easy demo and reference releases, Bad Boys II still has the slight edge over its predecessor, even if that's largely thanks to the style of the piece more easily lending itself towards showing off your home cinema in all its glory.

The 4K release is also unsurprisingly excellent on the aural front too, with its Dolby Atmos track founded upon an already demo Dolby TrueHD 7.1 core which does a spectacular job with the source material that, as with the previous Mastered in 4K Blu-ray's DTS-HD Master Audio 5.1 track, is utterly reference through and through.

Unlike the very good but not exactly demo (when, more importantly, it really should have been) audio track that accompanies the 4K Ultra HD Blu-ray release of the first film, Bad Boys II's boasts all the power and precision you would have expected from this well-engineered blockbuster beast. Dialogue is delivered clearly and coherently throughout, rendered predominately across the fronts and centre channels, with the witty banter sitting comfortably on top of any sequence – from the quieter moments to the more common high octane action sequences.


Utterly demo and reference through and through

The score and music tracks provide plenty of fuel for the surrounds, and kick the LFE into touch, engulfing you in the mix, but it’s the finely-tuned thunder of the effects that truly ignites the soundstage, whipping you around the dominant action setpieces; perforating your living room walls with bullets; and hurling cars at your face. It’s an immersive, impressive track, building upon the already excellent reference audio from the Blu-ray, and remaining a top tier audio presentation.

Nothing on the 4K disc, but the accompanying Blu-ray provide all the old Deleted Scenes, Featurettes and Music Videos Bad Boys II was very late to the game (almost True Lies late) when it came to its long overdue Blu-ray release, hitting shelves long after the 4K format had already been unveiled. Thankfully Sony don't make the same mistake on Ultra HD Blu-ray, which isn't really all that surprising given the prep-work down for the tardy Mastered in 4K Blu-ray edition.

Equally unsurprisingly, it looks utterly spectacular in full-fat 4K, and comes with a tremendous Atmos upgrade to boot, making the lack of new extras pale into insignificance when it comes to the sheer demo-worthy nature of this release. Fans should lap it up.