Back to the Future Part III Movie Review 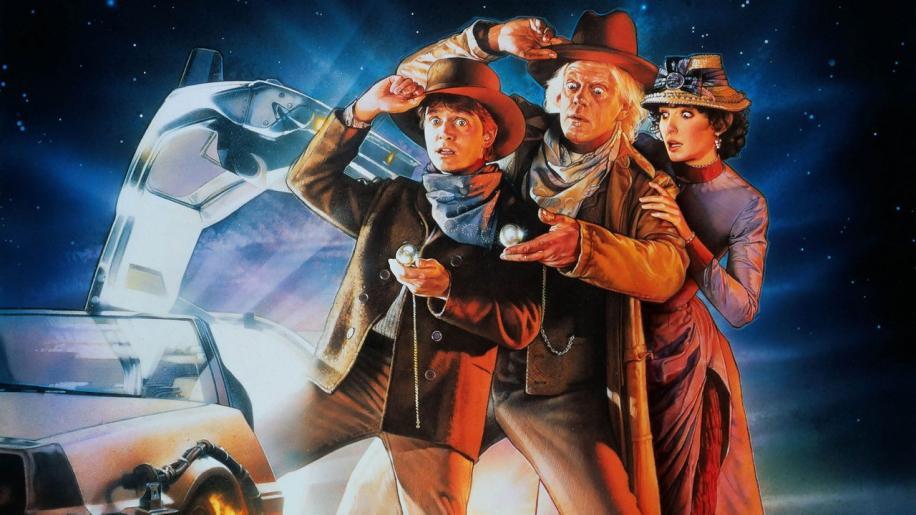 Who hasn't daydreamed about travelling through time? I think I would be safe in presuming that many of us (if not all) have wondered what would have happened if we had made different choices throughout our lives and what having the means to change that would mean. What if I had told Susan how I felt that night? What if I had just invested in Microsoft when I had the chance? This brings us nicely to the main concept of the Back to the Future movies and why they are held in such high regard and appear timeless even after 20 years. After all the first chapter of the movie was filmed and set in 1985......well sort of.

Ah 1985, what a year it was with the start of the Yuppie movement, high interest rates, the stock market boom and the Iron lady in power. How could we forget that most important facts of the 80's - greed and capitalism, which were running rampant. So with that in mind, it's surprising that with the main thrust of society and it's inherent greed at the time simply fails to filter into a movie that really did encapsulate 1985 in all it's glory.....or did it? Well, no, I don't think it did and let's be thankful for that, as Back to the Future may have started in the mid 1980's but it still appears to me to be a timeless classic which doesn't wear the badges that have dated the other contemporary films of that era. There are various reasons for this, but the main centre point of the films are the characters that surround Marty McFly (Michael J Fox) as he attempts to understand human nature and the choices we make throughout life, which can effect more than just your wealth.

For those of you who have been too busy time travelling to have watched these great movies maybe a quick recap will help? Marty (Michael J Fox) is your average 17 yr old American kid, he likes his rock music and guitar, has a very pretty girlfriend and lusts after the shiny 4x4 in a local garage. He is also friends with the slightly eccentric Dr Emmett Brown (Christopher Llyod), an inventor who has yet to invent anything which works properly. Well on October 26th at 0115am, Marty meets with Doc who proceeds to unveil his next big invention, a Delorean DMC12 capable of time travel! However before the Doc can disappear into the future as planned, he is gunned down by the Libyan terrorists he stole uranium from. Marty in a desperate attempt to escape, jumps into the time machine which results in him accidentally going back to 1955. Marty is in more trouble than he could imagine as his future mother falls in love with him and he must find a way to get his parents together again before he disappears from existence. We also meet familiar characters who will turn up throughout the trilogy in one form or another as we get to see three generations of Hill Valley.Part II starts at the exact point we left our heroes, as Doc tries to get Marty to help him stop the McFly family of the future, destroying itself during a series of events revolving around Marty's kids. Just as they succeed old Biff overhears Marty's plan to take a sports almanac back to “Place a few bets”. After stealing the Delorean, Biff hands this book to his younger self before returning the time machine. Once Marty and Doc return to 1985, they find that things are not how they left them and must go back to 1955 to sort the mess out.

The final part of the trilogy deals with Marty attempting to rescue Doc Brown for certain death in 1885. What follows is a fun encounter with the Wild West as both try to get back to the future, yet Doc ends up falling in love and the only way they can get the Delorean up to 88mph is by steam power!

So that's all a little rushed, but many reading this review will have experienced these movies in one form or another and the DVD set was one of the best selling discs during it's release in 2002. What we have here is the 20th Anniversary release, which in Japan has spawned this impressive set. I hold these films very close to my heart in the same way the Star Wars Trilogy ignited my passions for cinema back in the 70's and early 80's. The fact that this trilogy still feels fresh after 20 years is a testament to Writer/Director Robert Zemeckis and Producer Bob Gale's visions. The project had originally seen the time machine as a Fridge Freezer, but after concerns that children may try to copy the film they soon dropped this idea. Instead they foresaw the time machine being mobile such as a car, so why a Delorean? Well the official line was that it was the only car to have gullwing doors which allowed the set up as being an alien vehicle during the first movie. I suppose the main in-joke is the Delorean is a car which was designed to be the future, built in Belfast and which sunk just a quick as the Titanic due to a certain drugs bust. The car was never reliable as it was based on components of many other production vehicles and the most famous of these faults being the starter motor and gullwing doors which leaked (just like the Titanic). These points where obviously helpful for the plot of the movies and in choosing the Delorean they immortalised the car forever. I defy anyone not to look at this motor vehicle designed more than 30 years ago and fail to think it still looks futuristic, it is a beautiful shape and every time I look at my 1.18 scale model I can dream.

Obviously time travel has been used in many popular franchised movies, each with its own take on how it would work and the rules which would govern such exploits. The refreshing aspect of these movies is that all these rules are given to the audience by the main characters as they go about their exploits. There are plot holes, as with any time travel scenario, but the producers are clever enough to leave most of the explanation to the viewers own imagination, as well as the use of interesting characters and a strong story about hope, which therefore allows the Hollywood tricks to work without too many questions being asked.

This 20th anniversary edition is a sight to behold in itself, my favourite item being the full sized Delorean Number plate. Also included are Kubrick Toys, a copy of Marty's letter from Doc Brown, concept drawings a full colour booklet and of course the movies in a 4 discs set. So how does this superlative box set compare to other region releases? Let find out.