"Your future is whatever you make it, so make it a good one." 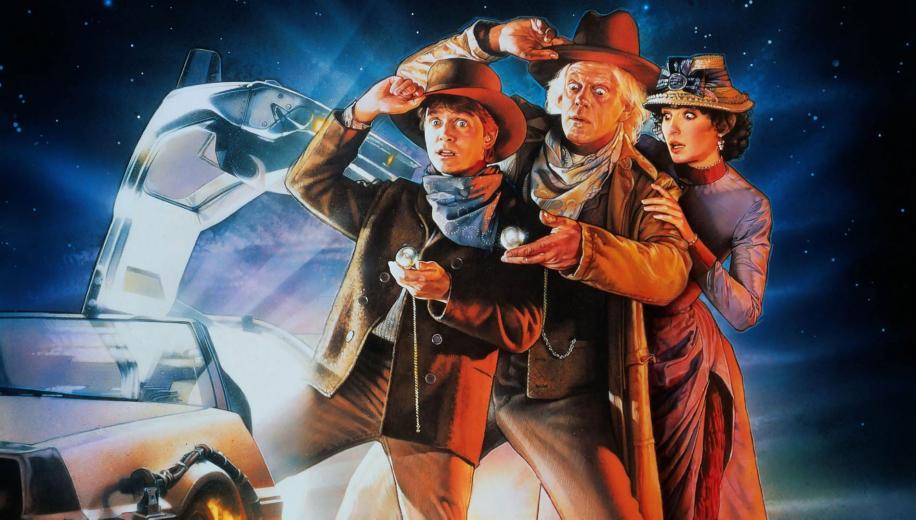 Back to the Future Part III Review

A fitting conclusion to a basically perfect trilogy, Back to the Future Part III goes wild in the Old West, and completes the new Ultimate Trilogy 4K Box Set, with easily the best native 4K Dolby Vision-enhanced video of the bunch.

If Back to the Future Part II has to be regarded as one of the best second movies in a series, then Back to the Future Part III arguably bests this challenge by becoming one of those relatively rare third movies which absolutely nails the landing to a tremendous saga. Where some mighty franchise have fallen down on their third outing, with the likes of Godfather Part III, Return of the Jedi, or even the flawed Alien 3 (although the director's cut is legitimately better), a few somehow maintain the quality, sometimes even doing something a little different to add an extra dimension to the formula - Indiana Jones and the Last Crusade threw in the great dynamic with Connery, Die Hard with a Vengeance similarly spiced things up with a Lethal Weapon script adapted and Samuel L. Jackson making the perfect partner in crime, and Back to the Future Part III threw a complete curveball by not just skipping 30 years into the future or the past, but going 100 years back for some fun wild Wild West antics.

It may not be a perfect film, or a perfect sequel, but it's arguably the perfect conclusion to this trilogy

Although perhaps initially jarring as fans no doubt were only just getting used to the 50s and once-future 2015 setting, with the 100 year leap quite a change in tone and setting, the end result is a wonderfully constructed finale, tying in a welcome arc for Lloyd's Doc, who finally gets some decent attention, whilst we revisit the Biff-esque shenanigans and even throw back to the very movie they were watching earlier in the series - A Fistful of Dollars - with aplomb. Fox is on fine form, especially considering the background to his condition at the time, Mary Steenburgen is a wonderful addition as the love interest for Doc, and Lloyd enjoys the limelight he's finally afforded. It may not be a perfect film, or a perfect sequel, but it's arguably the perfect conclusion to this trilogy.

Back to the Future Part III 4K Video

Back to the Future Part III lands in 2020 with a 4K trilogy box set courtesy of Universal. This highly anticipated Ultra HD Blu-ray release just goes from strength to strength, besting not only the first movie's presentation, but also the already better second film's presentation, with the 4K restoration resulting in native resolution and, being enhanced by Dolby Vision (and HDR10+), delivering the most wonderfully gorgeous image of the three.

Easily looks the best of the three

Back to the Future Part III perhaps could have been expected to look the best of the three, but the fact that it easily looks the best of the three will undoubtedly come as a pleasant surprise to those watching them all in close succession. It was the most recent of the movies, but only by a hair's breadth, having been shot back-to-back with the second film. However, the source material is clearly easier to restore, with some gorgeous sun-drenched daylight setpieces, plenty of stunning natural backdrops and - for the most part - less of the effects-heavy, quality-compromising shenanigans that affected the first and perhaps even moreso the second movie.

Detail is tremendous, with that red Arizona sand providing a wonderful texture to the majority of the proceedings, a fine and consistent grain remaining stable throughout and never betraying the underlying texture. Sure, the film still has those dodgy optics which soften the proceedings when we double up on Michael J. Fox (or Lloyd for that matter), but anybody who has worked their way through the set knows the routine by now and it doesn't take away from how spectacular the rest of the footage looks; if anything it just highlights the improvements made.

Talking of highlights WCG, HDR and Dolby Vision (and, for those who have it, HDR10+) are once again on fine form, adding that extra depth of rich vibrance to each and every tone and yielding strong black levels for the far less frequent night sequences. It's a glorious upgrade, and the pick of the trilogy, visually.

Back to the Future Part III 4K Audio

Back to the Future Part III's 4K Blu-ray also provides an impressive upgrade in the form of Dolby Atmos, with the 3D object-based high-definition immersive audio track delivering an atmospheric and suitably western flavoured aural accompaniment to the proceedings.

Dialogue is delivered clearly and coherently throughout, taking precedence across the frontal array where necessary, whilst effects enjoy the downpour of the opening sequence, the thunderous charge of horses or roar of a bear, and plenty of twangy old school gunshots lighting up the soundstage with aplomb. It's hectic, fun and a wonderful ride, sounding absolutely better than ever, with strong backup from the score across the surrounds. A very good upgrade rounding out a very nice trio of Atmos tracks.
﻿

Back to the Future Part III 4K Extras

Back to the Future Part III's 4K Blu-ray disc follows suit with the other two movies, leaving the new material for the dedicated extras disc and pleasantly porting everything else onto the 4K disc itself. In terms of older extras, it already includes a great selection, almost identical to the array on the previous films - another two Commentaries, a single Deleted Scenes, some archival Featurettes, Behind the Scenes Featurettes, FAQs, and Trailers.

The dedicated extras discs includes many new extras which offer a retrospective look and span the entire trilogy, including a host of must-see features:
﻿
﻿- Lost Audition Tapes (Ben Stiller, Kyra Sedgwick, Jon Cryer, Billy Zane, Peter DeLuise and C. Thomas Howell)
﻿- The Hollywood Museum Goes Back to the Future Featurette on this exhibition
﻿- Back to the Future: The Musical Featurette
﻿- Q&A
﻿- Original Songs
﻿- Could you survive the movies? Back to the Future laws of physics YouTube episode
﻿- 2015 message from Doc Brown
﻿- Restoring the DeLorean
﻿- Looking Back to the Future multi-part Documentary
﻿- Back to the Future: the Animated Series episodes
﻿- 2015 Commercials (Jaws 19 and Hoverboard)

Back to the Future Part III 4K Verdict

Back to the Future Part III is a fitting conclusion to a near-perfect trilogy, adding to the journeys of the first two movies with a wild and imaginative change in setting and a fabulous new adventure to go on.

A fitting conclusion to a near-perfect trilogy