"Wait a minute, are you telling me you built a time machine... out of a DeLorean?" 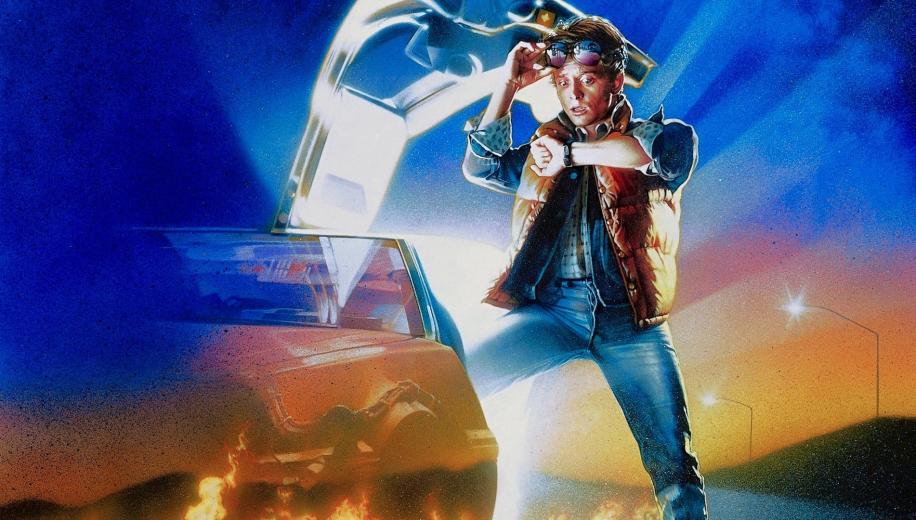 Back to the Future Review

Robert Zemeckis' 1985 all-time classic Back to the Future jumps onto Ultra HD Blu-ray with mostly impressive native 4K Dolby Vision and Atmos, as part of a lavish must-have trilogy set.

Now regarded as one of the greatest films of all time, Back to the Future is a superb blend of time travel hijinks and coming of age chaos, throwing some fish-out-of-water comedy and running-out-of-time tension into the mix for a ride which is just about one of the best family-friendly sci-fi action-adventures in existence.

Bouncing off his success in Romancing the Stone, Director Robert Zemeckis would be catapulted into the big leagues partly thanks to the production venture of Spielberg's Amblin Entertainment, Spielberg being Zemeckis' mentor at the time. Floundering in a state of near-bankruptcy, Michael J. Fox's success in the TV series Family Ties would see him being cast in the lead here, and define his career thereafter, with the film even impacting the cult status of the short-lived DeLorean car.

The story manages to plot out a surprising number of otherwise mind-bending time-travel narratives with seeming ease of understanding, as it launches Fox's teenager Marty McFly thirty years into the past, where his interactions with his parents threaten to undo his very existence. So Marty not only has to find a way to refuel the plutonium-driven time machine, but also find a way to push his parents together to prevent him being erased from the timeline - and that's even before having to address the fact that he just watched his best friend, the eccentric Doc (Christopher Lloyd) getting gunned down by terrorists, and needs to find a way to save him back in the present.

Beautifully constructed, and wonderfully staged, the feature is ripe with exaggerated characterisations and pantomime villainy, but it works perfectly for this family outing - Marty's dad is a cowardly, bumbling geek; his dad's nemesis Biff the archetypal high school bully, and Marty himself the effortlessly cool underdog who slips his way out of tough situations with a bit of cunning and an improvised skateboard. Fox and Lloyd are the standout stars - both would go on to be defined by their roles here - but the whole ensemble, including Lea Thompson and Crispin Glover as the parents, and Thomas F. Wilson as the bully Biff, would be perfectly chosen to complete the ensemble. And Zemeckis superbly blended the future/past clash, drawing in a memorable score from Alan Silvestri (which is strangely predictive of his future score to Predator and its sequel), and some great song tracks, as well as a slew of iconic setpieces. One of those few movies that resulted in a sequel that almost bests it, the first is still an absolute classic.

Back to the Future 4K Video

Back to the Future lands in 2020 with a 4K trilogy box set courtesy of Universal. This highly anticipated Ultra HD Blu-ray release is hopefully just about enough to leave fans satisfied, with the 4K restoration resulting in native resolution and being enhanced by Dolby Vision (and HDR10+), but also having to contend with some clearly quite problematic source material, and doing its damn best to impress.

Doing its damn best to impress

Back to the Future was perhaps never destined to look stunning, with it - and moreso even the sequel - involving some then-cutting-edge effects which don't make it easy for restoration work to iron out the visual kinks. There's just some bits that will always have baked-in, poorer, results, but this 4K presentation gets it right for the majority of the runtime, nailing that HDR/WCG-enhanced palette, and, for the most part, finding that sweet spot between DNR'd to hell and noisy-as-hell, with the image cleaned up pretty lovingly, and only a few instances where odd anomalies will leave you scratching your head.

It's far from perfect, but will hopefully still leave you with a big grin on your face, as - taken as a complete package - it's undoubtedly the best the film has ever looked or sounded, and it's a hell of an experience getting to watch it again on the 'big' small screen in all its glory. If you want to pick it apart, then there's surely plenty to complain about, but, taking a step back, it's a very enjoyable upgrade on the whole.

Detail, particularly on mid range and longer shots is largely excellent, close-ups are either so bad or so good that they often highlight the different makeup applied (presumably to keep Fox youthful, and also to age Lloyd, which often leaves him with this weird plasticky stain dripping down his neck), and car details, clothing textures and background nuances abound. Indeed, for the daytime opening sequences there's a lot of wow factor, and the night trip back in time is also impressive, with some of the more questionable moments only being a factor really when we hit the past, and checkered clothing and odd noise starts coming into the field. Whether you notice everything that's wrong with this presentation is probably directly influenced by how involved you are in enjoying it, but possibly the worst moments come in the scenes with Lorraine in the car towards the end, where detail appears to drop off, noise becomes apparent and, either through poor lighting or damaged stock, the shots just look sub-par. It's the worst the film gets and, even so, utterly forgivable in the grand scheme of the restoration of not just this but all three films in the trilogy.

Besides, we haven't got to the best bit: the WCG, HDR and Dolby Vision (and, for those who have it, HDR10+) are implemented in a sublime fashion, picking up everything you can think of: the underside of Marty's skateboard, the positively radioactive glow of the dashboard in the DeLorean (it pops with such intensity you have to wonder whether it ever looked anything like this even on the real set), the flaming tracks of the dash through time, the blinding intensity of the lightning, the neon street lighting, and even the crazy yellow/green/blues of the 50s jukebox (again, surely it wouldn't have been this vibrant in real life?). Pick a colour, whether on the outfits, the vehicles, or the sets - and it's hard not to see that this has been given an absolute new lease of life, polished up and infused so that it properly pops. Yes, it's flawed, and yes it's not quite the 'perfect' presentation that perhaps everybody was hoping for considering the £50 price tag on the box set, but it's still a wonderful experience revisiting this 1985 classic in inarguably the best shape it has ever been in.

Back to the Future 4K Audio

Back to the Future's 4K Blu-ray also earns a hell of an upgrade in the form of Dolby Atmos, with the 3D object-based high definition immersive audio track refashioning the soundtrack into a boisterous, thrumming affair that more than pulls you into this intoxicating ride.

Nailing the dialogue clearly and coherently throughout, given priority across the frontal array, the first film's excellent soundtrack really gets a serious upgrade here, expanding out across the arrays with aplomb to deliver a thoroughly engulfing experience. It's still somewhat front-dominated, but it's not just the booming gunshots, and crackling time-jump electrics that stand out, with even the thrum of Doc's busy environments coming across in this immersive offering, whether full of clocks or weird contraptions and 'inventions'. Oh, and that ridiculous speaker with its triple overdrive. LFE input is great, underpinning the whole thing, and giving it extra depth and impact, whilst the 'live' performances and the score sounds absolutely tremendous. Sure, it's not like a modern movie in Atmos, but it's great work nonetheless.
﻿

Back to the Future 4K Extras

Back to the Future's 4K Blu-ray disc itself doesn't actually include anything previously unavailable, even if it does nicely port everything onto the 4K disc itself, but it does include a whole extra disc of extras on a dedicated Bonus Disc in the set. In terms of older extras it's already pretty comprehensive, with two Commentaries, a slew of Deleted Scenes, some archival Featurettes, Q&As, Behind the Scenes work and Screen Tests, the Power of Love Music Video and some Trailers.

A boat-load of extras

The dedicated extras discs includes many new extras which offer a retrospective look and span the entire trilogy, including a host of must-see features:
﻿
﻿- Lost Audition Tapes (Ben Stiller, Kyra Sedgwick, Jon Cryer, Billy Zane, Peter DeLuise and C. Thomas Howell)
﻿- The Hollywood Museum Goes Back to the Future Featurette on this exhibition
﻿- Back to the Future: The Musical Featurette
﻿- Q&A
﻿- Original Songs
﻿- Could you survive the movies? Back to the Future laws of physics YouTube episode
﻿- 2015 message from Doc Brown
﻿- Restoring the DeLorean
﻿- Looking Back to the Future multi-part Documentary
﻿- Back to the Future: the Animated Series episodes
﻿- 2015 Commercials (Jaws 19 and Hoverboard)

Back to the Future is a tremendous all-time classic, impressively put together, superbly cast, wonderfully and energetically acted and, with a pitch-perfect blend of sci-fi craziness and man-out-of-time comedy, hitting the mark on every count.