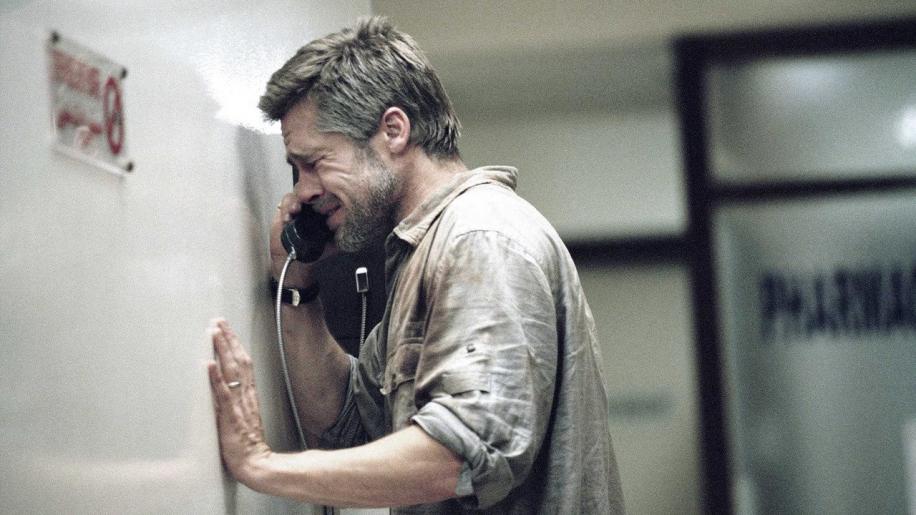 Hi, folks, and welcome to Chris's Quick-Fixes, a series of short, sharp shock reviews specifically designed to cater for titles that have either slipped through the net, or simply do not warrant the usual in-depth and comprehensive dissection that I would normally bestow. Technical rundowns will, however, still be thorough.

This time out, we can take a brief look at one of the earlier releases of 2007, the Blu-ray edition of Babel. Here was a film that looked, for all the world, like one of those overly profound and intensely worthy gong-receivers that would, inevitably, split the camp down the middle. A big, sprawling narrative that encompasses several different plot strands and multiple characters that will, ultimately, prove to have an unlikely and traumatic connection, Babel is a serious and intelligent dissection of morals, racial and societal integration and a fierce dissection of cause and effect. When a Moroccan farmer buys a rifle so that his two teenage sons can shoot the jackals that prey on the family goats, he sets in motion a series of events that affect not only his own livelihood but those of American tourists Richard and Susan. A bullet fired by an uncomprehending boy in sheer boredom from up in the mountains rips through the roof of a tour bus and enters the shoulder of Susan (Cate Blanchett). In desperation, Richard (Brad Pitt looking exceptionally grizzled - check out those crinkly eyes) is forced to carry her to a local village where confused but helpful hill-folk attempt to tend to her, whilst the other westerners from the bus argue and bicker and demand that he allows them to leave him so that they can escape from what, to them, appears to be a hostile and dangerous environment. With no hospital for miles, lackadaisical aid from the US Embassy and only a dirty and dishevelled doctor that they find hard to trust able to staunch the blood-flow, Richard and Susan are in for a rough and taxing time.

But if things are going bad for them, their poor young kids and their Mexican nanny Amelia (Adriana Barraza) are going for an equally fateful ride through a different desert. With no-one able to look after the kids for a day whilst she goes across the border from San Diego to her son's riotous wedding celebration, Amelia is forced to bring her young charges in tow, unaware that her drink-and-drug fuelled nephew is going to abandon them in the middle of the most inhospitable stretch of desert when Border Police rattle his nerves. Thus, the film leaves mother and father and kids stricken half the world away from each other in plights of escalating dilemma.

But that's not all.

The catalyst for all this trouble has not yet washed its hands of meddling with hapless folk. Hard-line Moroccan police investigating the shooting of the American tourist are rounding up local farmers and conducting a vicious Sgt. Barnes (from Platoon) style interrogation. As the net closes, the two boys (Said Tarchani and Boubker Ait El Caid) are forced to come clean about their foolish actions and, together with their distraught father go on the run to escape the clutches of the brutal police. And, on another continent, deaf teenager Chieko (a haunting performance from Rinko Kikuchi) wanders through a vibrant and uncaring Tokyo in search of attention, using drink, drugs and sex to find the love that her recently-widowed father has not been able to provide. The link to the other disparate souls in conflict around the globe is that damn rifle again. For, as it transpires, Chieko's father was a hunter and, in a mixed-up and contrived set of circumstances - much like the film in general, in fact - left the rifle and three-hundred rounds of ammunition with a Moroccan farmer who knew just the right man to sell it on to - a man with two sons and a jackal problem.

Racial tensions and attitudes abound. Teenage alienation and family honour are brought into sharp contrast. The prejudices and intolerance of dictatorial authority are held up and scrutinised. And the simple need for understanding and compassion, the world-over, are explored and revealed as woefully lacking. Everyone here makes mistakes, though rarely for anything other than the right reasons. Fate just seems to want to stick its oar in and a set of unbelievable coincidences are triggered like the ripples on a pond after a stone has been dropped into it.

This is a long film and director Alejandro Gonzalez Inarritu, the man behind the critically praised 21 Grams and Amos Perros, enjoys dragging the disparate dramas out even further with stylistic longuers that probe the deeper recesses of characters in-extremis. Ordinarily, this approach is something that I would enjoy, but here the unfolding stories, with the exception of the Moroccan-set segments, border on the butt-numbingly boring. I went into this movie without much in the way of preconception and with quite an open mind, prepared for literally anything to come my way. Although Babel may not be my typical genre, I am a firm believer that a good story will always grip and entertain you no matter what category it might fall under. Now, even with that leniency in mind, I found Inarritu's film to be one long meandering road to nowhere - which is fine if the film in question is by David Lynch, who can make even the most unfathomable and dislocated journey seem very enjoyable and insidiously subtextual. But Inarritu's film, based upon a joint idea from himself and the eventual screenwriter of the piece, Guillermo Arriaga, plays out in such a measured and miserable fashion that it was nigh on impossible for me to engage with the bigger picture. The awful predicament that the two farm-boys find themselves in is devastating and the ticking-clock countdown to salvation for Blanchett's Susan is certainly of the hand-wringing variety, what with language barriers and the feeling of utter helplessness that Pitt strenuously embodies. But, despite good performances from Kikuchi and Barraza, I just didn't care about their stories, which felt uncomfortably hurled into the mix and deliberately and frustratingly contrived.

The film is ultimately more depressing than edgy and it rankles that such good talent has gone into producing something that doesn't really have anything to say other than the blatantly obvious ... and utilises the crassest and most immediately attention-seeking scenarios to elicit our emotions.

Well, I have to say that I was considerably underwhelmed by Babel. The film feels long and laborious, despite the efforts made to twist time and events around and to keep the situations feeling real, intense and vital. Sometimes, it is difficult to review a film that has so many angles to explore, so many developments and intentionally poignant incidents, because you feel the pressure to discuss and deliberate over its aims and its messages - and normally I love to do just that - but Babel, to me, was cold, contrived and heavily manipulative. The whole thing, like the superior, though still flawed, Crash (read my review to see what I mean) is built to reinforce a set of pre-determined values that are bashed out of the screenplay with a sledgehammer. The Brad Pitt/Cate Blanchett story is good ... not because it has the big stars in it - this plot would have worked no matter who played the roles - but because it feels so horribly intense and traumatic, ordinary people lifted from their lives into an ordeal that stretches and strengthens them. Likewise, the backstory of the peasant boys and their beleaguered family, which is painfully well-acted and involving - although I really don't think we needed that brief scene of one of them masturbating behind some rocks, which was just a poorly handled (no pun intended!) excuse for Inarritu to indulge in some squirm and smirk-inducing realism. But, the point that makes these two elements work so well is that they are the same story and, no matter how hard the writer and director try with the circuitous dramas that revolve around it - Mexico, the Far East - they just come across as, respectively, horribly contrived overkill and mediocre teen alienation, with neither commanding our attention with anywhere near enough power and resonance. One plays on our own keen-jerk and unavoidable concerns for the small kids involved - which is, of course, just overt manipulation requiring little or no skill on the part of the creative team - and the other is just interminably dull, dull, dull and shoehorned into the narrative at large with what is, arguably, the most tenuous of links. But then it does give Inarritu the somewhat dubious excuse to show a young girl in the buff which is, again, sensationalism that demands a reaction from the audience simply because it is there.

Definitely a film that some people will love, others will loathe. I think there is a reasonable story in here somewhere. The central conceit of the rifle and one calamitous shot is certainly a good concept for a multi-faceted, Shortcuts-style tale, but the film loses it in forgetting to make a valid point and pitching in a couple of lengthy diversions that provide only the simplest “so what?” of reactions. At the end of the day, Babel is professionally dreary and thematically redundant, but certainly full of enough overwrought and anxious moments to keep even the most jaded of crisis-merchants happy.