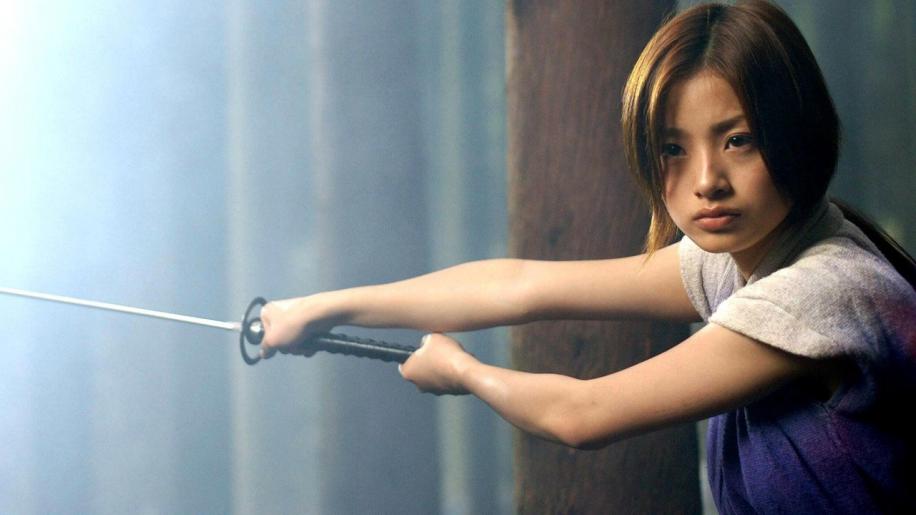 Deep in the mountains of rural Japan lies an unknown training camp run by a loyal warrior on behalf of his high priest. The camp is to train a group of young children to become masters of martial arts and swordplay for the sole purpose of becoming 18th Century Japan's best assassins. For as long as the children can remember they have been trained specially to carry out their “mission”; to rid the warring Japanese states of three warlords intent on causing death and destruction in a time when peace must be restored. When the time comes the children are let free from their camp to the “real world”, a world they do not know or understand but must learn to navigate to reach their ultimate goal of peace throughout the nation.

Their strongest pupil is Azumi (Aya Ueto), a highly talented teenage girl who leads this band-of-brothers on their mission in much the same way as in the manga comics from which the movie was based on. Her character plays the voice of the audience too through asking ethical questions of her master and friends throughout the movie, she also attempts to escape her life as an assassin altogether. Kitamura reveals the motivation behind quite a few of the other characters in this movie to keep the interest varied, although he doesn't go that far into it - favouring the look and sound of some good old fashioned action to any sort of complex storyline! Swordplay is very fast and convincingly choreographed, fatal blows are shot with the camera concentrating more on the killer than the killee which is interesting since very rarely (if at all) do we actually see any wounds. What we do see is gallons of blood all over every character within a 5 metre radius!! The obligatory bullet-time shot features early on and then throughout the movie, it often cuts into a slow speed-up shot that exaggerates the sword stroke that little more but doesn't often go so far as to rotate the camera angle to see the same strike from another point of view.

Kitamura does seem to put more stock into the look of the shot rather than its merit, and this doesn't always do it for me. For instance he uses a 360-degree rotation of a sword fight taking place on a loose rafter near the end of the movie. This is more nauseating than useful and is far too fast to actually be able to see the sword battle going on within the circle. The same is true elsewhere in the movie. It seems that priority is given to daring camera angles and edits that only last 5 or 10 seconds rather than actually illustrating the story better. Much like a gun-swinging US action movie the result is some dull in-between scenes that are very thin on script and don't really work, but that are there purely to set-up the characters nicely for a more dramatic shot later. However you do forgive since much of the violence is just so tasty to watch!!

Audio is fantastic in quality and quite interesting in choice. Early on and in-between confrontational action scenes the soundtrack is reminiscent of more Wu-Xia type movies; woodwind instruments and wind-in-the-trees effects merge with tribal drum beats for a quite hypnotic sound. But often there are quite anachronistic moments where rock or techno music takes over making everything seem that bit more recent, the 360-degree pan I mentioned earlier being built up by the sound of an airplane taking off mixed with a an electric guitar!!

All in all the effects are very slick (even though the sets look a little fake) and the choreography is very graceful. Visual editing is well supporting by excellent audio mastering and there is even the odd comedy gag that seems to come from nowhere. However the storyline is somewhat sacrificed for the “cool” fight scenes and while original they are not that memorable for being anything more than 20 guys and one girl slapping swords at each other (which is admittedly very cool, but has been done before). There is none of the hidden depth and meaning of Hero, and equally none of the out-and-out raw ferocious action moments of Battle Royale - but the Samurai sword fighting is still mightily impressive in it's own right