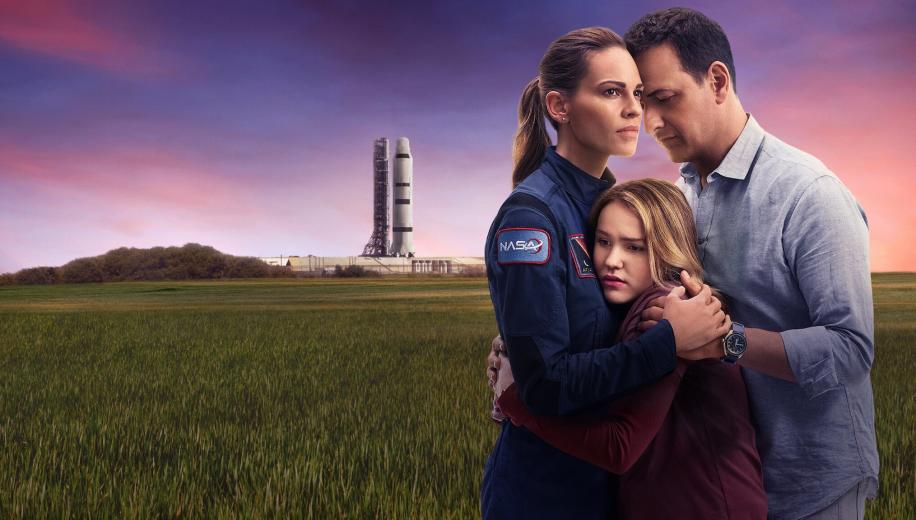 Given that we’ve all spent the last six months longing for a bit more space, Netflix’s drama about the first manned mission to Mars should really be something of a hit.

Starring Hilary Swank, the ten-part series is about a group of five astronauts and scientists who leave Earth on a three-year mission to become the first humans to set foot on Mars. In a fresh twist on the adventures in space genre, the series focuses largely on the ways in which such a monumental mission actually affects the people involved, and the ways the characters deal with disaster rather than just placing them in shots of disaster ad nauseum.

The series’ concept is without a doubt its main strength, and to begin with does set it apart from other recent film and TV projects with similar storylines. Emma (Swank) is the leader of the mission, but is more than a little preoccupied with what it will mean for her family for her to be away for three years. She’s left behind teenage daughter Alexis (Talitha Eliana Bateman) and husband Matt (Josh Charles), and spends virtually the entire series debating whether to abandon the mission and return to her family.

Ironically, Away’s downside is that it spends too much time at home

It’s a humanising element, and would no doubt have done the material more justice if it had been tempered with really any other narrative drive for Emma. After an exchange with Chief Scientist Yu (Vivian Wu) about missing family on Earth, Emma is told firmly “you’re looking in the wrong direction”. That same criticism could be levelled at Away as a whole, which is engaging, clever, entertaining and visually fantastic whenever its not preoccupied with Emma’s family drama on Earth. Swank’s character, despite being the Commander of one of humanity’s most ambitious endeavours, is defined by her motherhood, and it gets old pretty fast.

Ironically, Away’s downside is that it spends too much time at home. The show veers a little too much into soap opera territory to remain particularly interesting – though Charles and Bateman do their best, their storylines are at best familiar, at worst formulaic (teenage rebellion, medical scare, etc, etc). So many space movies and series seem preoccupied with astronauts’ relationship with parenthood – High Life, Gravity, Arrival, Interstellar, to name just a few – so it seems it was inevitable for Away to dwell on this, though in practice it leans on Emma-as-guilty-mother a little too much.

Aside from the occasional bits of snooze-inducing Emma dialogue, scenes with the other crew members are largely compelling. Emma’s other companions in space are surgeon Ram (Ray Panthaki), botanist Kwesi (Ato Essandoh) and cosmonaut Misha (Mark Ivanir), who are revealed to us mostly in flashbacks that allow each to become fleshed out characters in a way that Emma just isn’t.

At times, Emma is essentially playing the straight man to the rest of the crew’s likeable rogues. There’s a particularly cringeworthy exchange in which the crew are making light of a potentially deadly situation in an extremely realistic way, before Emma scolds them with “what’s so funny about dying?”. In insisting on Emma being the all-American action hero, who cares about Mars, her family, and nothing in between, the series sells both the audience and Swank short.

When we’re, well, away, the show soars

When we’re, well, away, the show soars. Despite its streaming, bingeable format, each episode functions almost as a mini procedural with a new narrative focus to get caught up in. The lives and characters of the crew are – for the most part – developed throughout. Indeed, their stories are innovative and interesting; in particular Yu, as a female Chinese scientist on an international mission. Away’s action sequences are really well done and manage to toe the line between exciting and over-the-top pretty well.

There’s a lot of potential here – from the amazing small-screen visuals to excellent performances across the cast and a host of characters with interesting backstories (the most unrealistic part of the series is probably the concept of this many countries working together to achieve something good). If Away toned down some of the soapiness and focused on giving Emma a few more dimensions it could really be out of this world, but this first season doesn’t quite manage to get into orbit.