It may defy the Netflix curse, but it can't escape the shackles of Netflix Dolby Vision 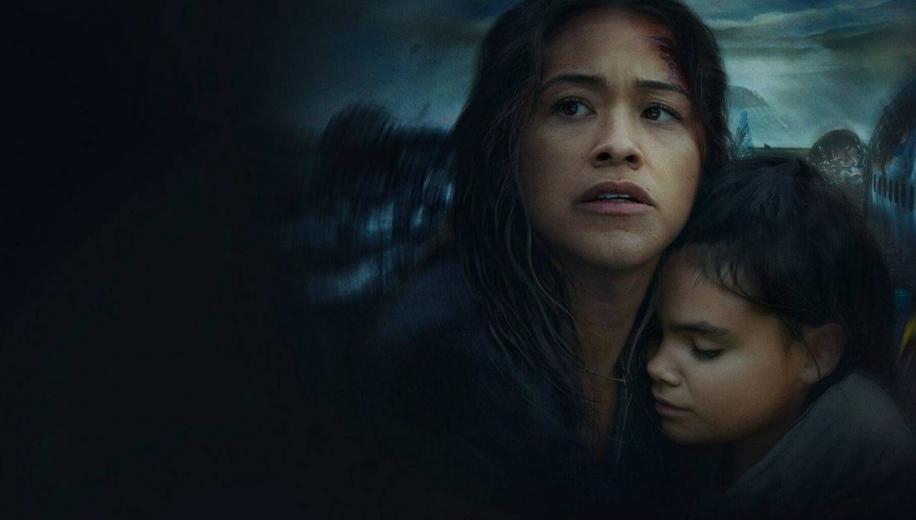 Running with a solid sleep deprivation premise, Awake is an occasionally surprisingly gritty apocalyptic drama which just about defies the Netflix curse.

A good premise can get you a long way, and Netflix clearly knows this, clearly taking its cues from A Quiet Place when it committed to a number of similar projects - going blind for the decent Sandra Bullock vehicle Bird Box, and then just outright duping Quiet Place for The Silence, and now pitching an interesting spin on the formula with sleep (or a lack thereof) as the element people have to live without.

... surprisingly brutal when it wants to be

After a strange event knocks out everything on the planet with a microchip, the human race discovers an even more deadly challenge - nobody can sleep. With a clock on just how long they can survive without sleep, a single mother and her two children make their way across increasingly deadly terrain looking for a secret location where scientists are working on a cure. And given that the mother's young daughter can somehow still sleep, she may well be key to facilitating this cure...

Awake comes to Netflix in 4K Ultra HD with Dolby Vision and Dolby Atmos, framed in the new streaming standard of 2.0:1 widescreen. There's no doubt that it's a very good looking image, textured and detailed, and frequently even quite filmic, but it's another Netflix/DV effort which is frequently overwhelmed by unforgiving shadows and infinite darkness. Sure, these days we don't really suffer through crush anymore, but Netflix's DV titles make it hard to appreciate entire sequences because, frankly, it's impossible to see anything. As per, this generally only affects DV streams, with the standard HDR layer a much more pleasant watch. The Atmos track is pretty boisterous, with an opening shock crash which will leave you stunned and some nice surprises along the way, and there's an ominous score to embrace across the surrounds.

... a solid piece of night-in entertainment

Awake is surprisingly brutal when it wants to be, hitting you hard early on with a couple of shock surprises, and maintaining a palpable sense of threat as the human population slowly devolve courtesy of this imposed and torturous sleep deprivation. It's a clever idea, justifying not only why people behave crazily, but why even the protagonists make mistakes, with memory failing, judgment questionable and seemingly no obvious way out.

Gina Rodriguez has made a decent name for herself post-Jane the Virgin, joining Netflix's Annihilation, and doing the Miss Bala remake, but showing more promise in the recent, excellent, Kajillionaire. She's really very good here, committing to every facet of the increased insanity of the sleep deprived mind, whilst also doing everything she possibly can to protect her children. And it's not as simple as "get them to the secure location", Greenland-style, either, with Rodriguez's determined doctor-mother - and former soldier, and former drug addict - faced with the moral dilemma that she's simply not prepared to let her young daughter be a guinea pig to be experimented on as society collapses. And yet, without a cure, who will protect the young girl?

Mark Raso, who directed Netflix's Ed Harris vehicle Kodachrome for his sophomore effort, puts together a solid study in mounting tension and impossible situations, peppered with tense scenes and a few shock events. It's surprisingly brutal when it wants to be, ratcheting up the tension for simple things like trying to find a working car, or attempting to get a map, and positing a small scale but no less scary world that is increasingly going to hell in a hand basket. He throws in a few familiar faces - Jennifer Jason Leigh (Possessor), Barry Pepper (Crawl), Finn Jones (Netflix's Iron Fist) and Gil Bellows - but is clearly determined to play against expectations, which really works quite well in a number of instances.

Of course, eventually Awake runs out of steam, straining itself to make it across the finish line, but thankfully delivering some satisfactory closure, proving a relatively rare exception to the Netflix curse (not least in its competent editing but also, particularly, in its sticking of the landing) and making for a solid piece of night-in entertainment.

Awake comes to the UK on Netflix in 4K Ultra HD Dolby Vision and Dolby Atmos, from Wednesday 9th June 2021.
﻿