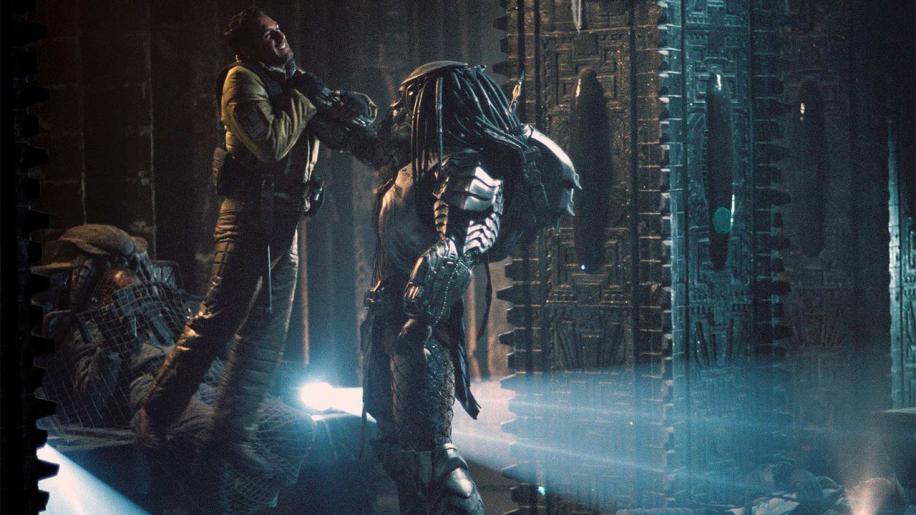 I reviewed the Unrated Edition of AVP a while back for its Japanese DVD release and, like that 2-disc package, this BD edition supplies both the Theatrical and the Unrated versions - only this time they are on a single 50GB disc. Although the film is still a clunker even in 1080p high resolution, the extended cut is definitely the better of the two, offering slightly more characterisation and a more satisfactory narrative. Therefore, I would opt for this version over its shorter cousin any day of the week. What follows is my original review for the Unrated Edition. My opinions about the film have not altered and please be aware that there are plenty of spoilers contained in this review - but then if you are considering purchasing this on Blu-ray I doubt very much that you are coming fresh to the film.

This is probably the most schizophrenic review I've ever written. It may have something to do with having to negotiate screen after screen of Japanese menus but I think the blame really lies with the difficult conundrum you will encounter herein. Namely, is AVP the vile abhorrence many claim, or is it just a slight popcorn-pleaser shoehorned into two highly popular cash-cows and squeezed dry? Let's see if we can find out.

“Something broke out of this body...”

So, come on then. In your heart of hearts did any of you really think that this movie was ever going to be any good? In the history of monster-mash team-ups only “Frankenstein Meets The Wolfman” retained the essence of the two original sagas and successfully intertwined them. Well, okay, it only partially succeeded. The point is that hurling together established icons with extensive back-stories and ever evolving futures is a recipe for disaster. Just take a look at Van Helsing. Back in Predator 2 when Danny Glover copped a glimpse of an alien skull adorning the trophy wall in the Pred's spacecraft, we all thought that it was a cool idea that one of those dreadlocked demons had bagged himself an acid-blooded xenomorph. But that was it, though. A cool idea. We never needed to see it happen. In fact, the scenario plays out a lot better when we don't see it. An in-joke, that's all. A little interspecies/inter-franchise nod of recognition. And that's where it should have stayed. I've read a couple of the comic books that originally took up the idea but, frankly, I wasn't impressed with them either. I just don't think the combination works, despite what Fox thinks.

Anyway, Paul W.S. Anderson clearly thought it would be a spectacular idea to put these two galactic battlers in the ring and ding the bell for round one. A self-confessed fanatic of the two franchises he relishes the opportunity here to take their best elements and mix them into the same pot. However, the concoction he serves up may look tasty but is as flavourless as space itself. Yup, he even wrote this as well and given his terrible track record - Soldier, anyone? - can we actually say that we are surprised at the soulless outcome?

Things start out promisingly enough with Lance Henriksen's corporate billionaire Weyland recruiting a team of skilled, but so obviously doomed, explorers to investigate a mysterious pyramid buried beneath the frozen wastes of Antarctica. In a cute early scene we even see Weyland briefly stab a pen between the splayed fingers of his hand, echoing the same trick displayed by the Bishop android from Aliens, reminding us that he truly is the one legitimate link to the premier franchise. The gorgeous Sanaa Lathan as intrepid ice-expert Lex, offers some slight gravity in the sledge-hammered-in Ripley role but, as with every other character in the piece, is short-changed by the script. After making a statement about how dangerous the whole affair is and deciding not to act as their guide, she relents all-too-quickly with a kind of sassy “I'm the boss” speech that becomes ultra-redundant the minute they set foot on the ice. She's only needed to get them from the ice-breaking ship to the location and then back again. But it's apparent that all her awesome skills as a guide account for nothing when the team simply drive a couple of miles to the site and then supposedly hand over the ropes to the hi-tech drilling squad accompanying them. Just what is she there for then? Oh that's right - hero-babe who can easily outlast all those tough guys with big guns and take on the combined might of the Aliens and the Predators. Sorry, I forgot.

“You think that's the last thing your dad remembers ... the pain? Or drinking champagne with his daughter up 14,000 feet in the air?”

Any characterisation is of postage stamp dimensions, the cast merely sketched in before getting pitched into a wasted PG13 romp that is as witless as it is bloodless. For it transpires that the Predators have constructed this ancient temple as a hunting-cum-training camp for their teenage warriors, using humans as hosts for birthing the ultimate prey. No, not Arnie (who really is the Guv'nor now) but Aliens. Lots of them. With a Queen locked up below, an egg-conveyor belt and a lovely little sacrificial chamber for those nifty face-huggers to play in, the Predators have got it all worked out. Of course, arriving only moments after the human canon-fodder that inadvertently contrive to set the whole grisly process in motion, is a new squad of masked, muscle-bound ugly Predators with all manner of gleaming weaponry. Couple that threat with the newly hatched aliens and a bizarre subterranean temple that shifts its walls and floor around every ten minutes like some huge Rubik's Cube and you've got pure video-game nonsense. But then of course - it's that Paul W.S. Anderson, isn't it? The Resident Evil guy. That explains the same severe lack of violence, as well. You want chest-bursting, aliens plunging their spring-loaded inner-jaw into craniums, Predators carving up their latest kills and blowing huge chunks out of prey - then you'd better just spin one of the originals again because you aren't going to get it here. Although there are plenty of deaths taking place there is zero build-up or suspense to bolster them and the fact that you neither care about the victims nor indeed, in many cases, even know who they are, only adds to the tedium. Once the temple setting starts to reconfigure itself - for no worthwhile reason, I might add - people end up all over the place leaving far too many idiots creeping around the same old dark tunnels we've seen a thousand times before. Even the neat flashback sequence to when the Predators walked the Earth like gods, worshipped by the ancients, feels like an off-cut from Stephen Sommers' The Mummy movies, becoming merely an excuse to show off the epic last stand of a trio of warriors besieged by literally thousands of swarming aliens.

But despite lifting the big main fellers from their parent features and relying on the ubiquitous ten-little-Indians routine of whittling down his disposable cast, Anderson's cack-handed touch is wholly evident throughout. Just like Event Horizon, he attains a quite unique hook to initially reel us in, then he labours over a fantastically inspired setting - the gothic spacecraft of Horizon swapped for a gothic temple here - and then he systematically strips away all the tension and excitement in favour of a succession of dreary set-pieces that drags the interest level down notch by lacklustre notch. But what about that ridiculously accelerated alien gestation/life-cycle? Come on, what's all that about, then? Why, oh why, do people in all the Alien movies insist on putting their fingers into sticky horrible alien goo? I mean, would you? Even a Predator does it in this one!

“What did you say this room was again?”

Oh alright, I'm sorry. I'm ripping into this movie quite remorselessly, I know. But I truly love the first three Alien sagas (but not the fourth) and the two tremendous Predator outings. Seeing this is like watching a fan-made film - which, of course, it ultimately is - where the makers have just repeated “Wouldn't it be cool if they did this?” or “let's have them do that, too! Oh, it's sooo cool, isn't it?” Well, it probably would be if there was a little more talent behind the camera and little more thought went into crafting an actual story and not just a one-act, set-piece gimmick.

But, guess what? Despite all I've just said about AVP's far too numerous bad points, I actually believe it has some merit, as well. Yes, honestly. The money-shot smackdown between the two monsters is awesome. You simply cannot beat the incredible sight of a Predator swinging an alien around by its tail and smashing it through a wall. To his credit Anderson shows real verve with this sequence. The beasts really move like there's some weight to them and the impacts are literally bone-juddering. Although I said at the start that this was exactly what we shouldn't see, it ended up being one of the few things in this film that is actually worth seeing again. Ultimately, the team-up of last surviving human Lex and indomitable Predator super-warrior Scar is actually handled quite well. I loved the scar-making ritual and the cobbled-together weaponry fashioned from an alien skull for a shield and its tail for a spear. There is clearly an intention to create some sort of iconic image here. Although having the pair of them do the Rambo slow-mo running-in-front-fire thing just comes across as cheesy. However, this double-act is made all the more convincing with the performance of Sanaa Lathan who, despite Anderson's best efforts, allows so much personality to shine through. Whereas, it could come across as a tad heavy-handed playing the tough chick routine, Lathan acquits herself very well indeed with a great strong-willed and resilient presence. It's also nice to see Tommy Flanagan (Maximus's loyal servant from Gladiator) getting some screen time again. Although, typically he doesn't last long.

So, here's where the schizophrenia comes in. I've found so much to hate in this movie - even the score stinks - that I really should be recommending that you all avoid it like the plague. Yet, hold on there folks, that title-bout is pretty damn tasty and all the big monsters look suitably beefed-up and terrifying. No, you're right - that's just eye-candy. But then again, it does try to take the combined sagas in a whole new direction, and couldn't the lack of a coherent plot or sympathetic characters just be put down to the courageous breaking of new ground? Still, it's not scary though, is it? There's a little bit too much bullet-time aimed at the face-huggers. Mind you, does look good, doesn't it ... the way it freezes there in midair, like that? Oh God, do you see what I mean? I really wanted this film to dispel my fears, and the fact that it was considerably less painful than I expected goes someway to indicating that it may have done just that, or at least partway at any rate. So, in summing up, I would have to say that AVP is best left as a curious footnote to the Alien/Predator franchises. Rather like the Paul McGann Doctor Who movie, it should reside in its own limbo, unattached to its estranged guardians. Let's just pray that the twist ending doesn't lead Paul W.S. Anderson back into this neck of the universe for a new and all the more hybridised creature-feature.

That's what I thought back then ... and I'm afraid it still is. But, to tell you the truth, I did it enjoy it a helluva lot more on Blu-ray! More on why that was so coming right up.