It took a decade - and 18 films - to build up to this landmark event, and it was worth the wait! 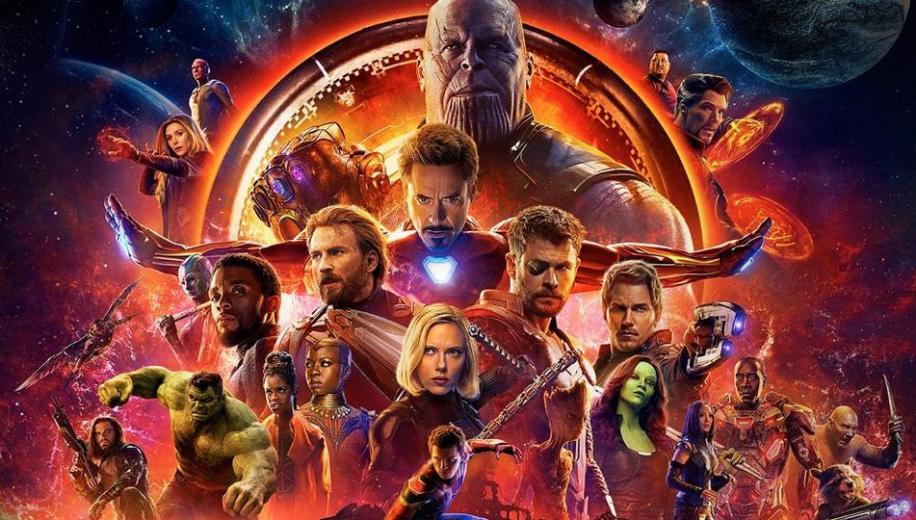 After an unprecedented build-up of some 18 films, Marvel have accomplished the seemingly impossible, delivering an all-star climax to a journey they've had plotted out for a decade. Unlike DC's desperate and botched attempt to skip-to-the-end in Justice League, Marvel have earned this conclusion (or at least first part of a conclusion), introducing characters meticulously with almost all the key players having not only origin stories but three-movie sub-arcs across a series of 'Phases' in the elaborate and extensive Marvel Cinematic Universe. Indeed, for those jumping in without having seen any or even many of the past 18 chapters, it would be hard to see how the impact or in-universe experience would be anywhere near as immersive.
Of course Infinity War, itself based upon a couple of seminal comic book stories from the Marvel pantheon (not wholly unlike key chapters like the preceding Avengers movies, Winter Soldier, Iron Man 3, Civil War and Thor: Ragnarok) is likely best seen as not only a culmination of the ensemble events in Avengers, Avengers: Age of Ultron and, of course, Captain America: Civil War, but also the conclusion of the ongoing backstory that has formed an element of such films as Captain America: The First Avenger, Thor: Ragnarok, Age of Ultron, Thor: The Dark World, Guardians of the Galaxy and Doctor Strange, namely the arc involving the mysterious and powerful Infinity Stones, which fans will not be surprised to find are at the core of Infinity War. Infinity War's premise has all-powerful God Thanos on a smash-and-grab mission to collect all of the Infinity Stones so that they can be used to power his Infinity Gauntlet, which he can in turn use to rule - and destroy - the Universe. Kick-starting after the cataclysmic events which affected Asgard at the end of Thor: Ragnarok (literally the mid-credits scene) the story doesn't waste any time establishing Thanos's power, pitting him against the remaining superheroes aboard the ship escaping Thor's realm. With the Avengers soon on red alert, all the key players have to (try to) come together to figure out a plan of action for tackling the seemingly unstoppable planet-killing villain, playing catch-up to his relentless quest and even joining forces with the Guardians of the Galaxy who are on their own, more vengeance-fuelled mission.

Infinity War delivers on the promise that Marvel Cinematic Universe overlord Kevin Feige has implicitly provided over the last decade of intricate plotting, bringing together the characters in this impossibly crowded universe in an epic adventure with very real stakes. Whilst most fans will already be aware that the real end run of this whole Avengers soon-to-be-20-movie arc will likely be next summer (Infinity War was originally split into Part 1 and Part 2, and shot back-to-back with the second part this time next year, but Part 1 was retitled merely Infinity War, with the second part currently untitled), this is still an exhausting two-and-a-half hour rollercoaster ride which really does bring all-star comic-book cross-over stories to life in a way that arguably even the comics have struggled to pull off, and in a way which has certainly never been seen before on the Big Screen.


Marvel have accomplished the seemingly impossible

Helmed by (arguably) the MCU's most consistently impressive directors, the Russo Brothers (who previously delivered the best entries in Winter Soldier and Civil War), fans always knew this project was going to be in safe hands, but the Russos continue to surprise with their handling of characters and expanding the witty presence of Spider-Man to now include the whole Guardians ensemble, complete with the near-constant sarcasm (and great tunes) they bring, even in the face of adversity. Rather than shy away from it, the Russos embrace the challenge, affording Infinity War not only a fine-tuned blend of Winter Soldier tension, pacing and stakes (the bodycount is phenomenal), but also more than a hint of Whedon-esque (or James Gunn-esque) wit to counterbalance the impact of the grand scale set-pieces. It's something Whedon himself accomplished to some extent in the very first Avengers team-up, but the Russos perfect it here, and whilst it's a heavyweight two-and-a-half-hour monolith, there's very little fat to this beast of a movie; it powers through on pure muscle, barely affording time for all of the myriad players to get their 15 minutes of glory, and certainly leaving you with the feeling that some of them aren't going to truly shine until we get to the fourth Avengers movie next year.

Perhaps key to making this epic beast work - beyond trimming away all the fat (almost every single conversation has consequence, whether reminding us of everyone Thor has lost or putting Captain America back in front of a senate committee) - is delivering up the one thing that the Marvel Cinematic Universe has struggled, more often than not, to find: a great villain. Josh Brolin's Thanos could have easily been another Apocalypse-scale purple joke, but he's actually afforded a hell of a lot of screen time, and fashioned from a formidable opponent into a curiously compelling villain with a genuinely considered agenda. He may be a genocidal maniac, but he's not just another dastardly world-destroyer, with no reason behind his actions beyond "I'm evil". He's almost tragic, truly believing that his quest to literally halve the population of every world he lands upon in order to prevent overcrowding from leading to implosion, is a just cause. It makes him all the more interesting and all the more deadly; a committed and capable opponent who will do anything to get what he wants.

If anybody is going to come out of this movie with a complaint, it's going to be that they removed the Part 1 moniker, because there's no escaping the fact that all fans are going to be doing for the next 12 months is biding their time in high anticipation for the only superhero movie that could best (or potentially break) this epic instalment - next year's conclusion. Don't let that put you off lapping up this tremendous and groundbreaking chapter though, it'll be the benchmark for ensemble epic blockbusters for some time to come.