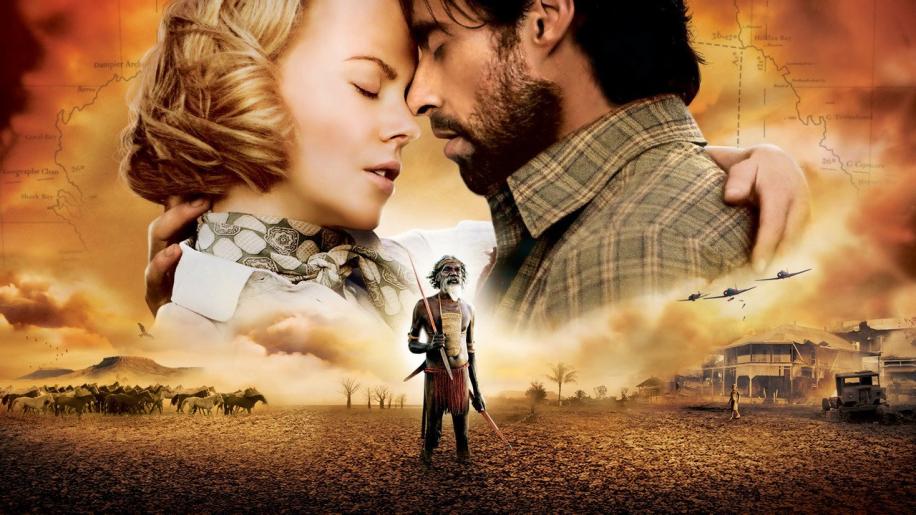 I settled back to watch Baz Luhrmann's epic 'Australia' filled with hope. The trailers made it look fantastic. It featured two of the biggest names in Hollywood and promised a sweeping tale set amid wide vistas. I was really looking forward to it. Just my cup of tea!

What I eventually got was like a cup of tea that took an incredibly long time to make by someone who'd forgotten to boil the water first. The end result, like a badly made cup of tea, was weak, unsatisfying, disappointing and left me wondering how the maker could have failed to get it right. After all, he'd had all the right ingredients. How could it possibly go wrong?

Also, like drinking a bad cup of tea, I was faced with the decision of whether to tip it down the sink or see it through to the last few dregs. Such was my desire to find something in the last reel that made the whole affair worthwhile, that I stuck it out. Sadly my hopes were dashed - and I had so wanted it to be good.

So what's it all about?
In 1939, the aristocratic Lady Sarah Ashley (Nicole Kidman) travels from Great Britain to Australia to meet her husband, Maitland (Anton Monsted), who she's convinced is only out there chasing Sheilas. The husband's trusted man Drover (Hugh Jackman) comes to the city of Darwin to bring Sarah to their farm; however, when they reach Faraway Downs Farm, they find that Maitland has been murdered. Sarah befriends Nullah, a half aborigine boy, who tells her that the administrator Neil Fletcher (David Wenham) is stealing her cattle, has killed her husband and is working for the cattle baron King Carney (Bryan Brown). Sarah fires Fletcher and his men, then, together with Drover, Nullah and a group of loyal employees, ride together driving the 1500 head of cattle with the aim of suppling the army and thus win a tender in these times of war. Along the way, we witness the Japanese bombing of Darwin, a horror that happened soon after they attacked Pearl Harbour, as well as the plight of the half aborigine children (dubbed the 'stolen generations'), taken from their parents to Mission island, where they're trained to become servants of their white lords and masters. A twist of fate separates the three main characters and each fear that the others are dead. Will they be re-united or will they be separated forever...?

This is a very uneven movie and there were so many places where it could have ended naturally, but it lurched on for a full 165 minutes. It reminded me of a mountain I've climbed in Scotland, called Schiehallion, that's famous for its false peaks. You think you've reached the top, but no, there's another peak still to climb. It becomes wearing after a while, but you carry on because you know the view from the top will make it all worthwhile. Sadly, this isn't the case with 'Australia'.

In the hands of a director like David Lean, this could have been a great blockbuster, but unfortunately it was entrusted to a lesser experienced talent. It needed someone sensitive enough to understand human emotion with the ability to say 'no' to the lack of subtlety in script , acting and direction.

It needed someone at the helm, who'd been a film editor and spent a good few years in a cutting room. It needed someone who knew that a film should have a beginning, a middle and an end - not several staggered endings tacked on to each other.
The style of the editing made it hard for me to become involved as each individual shot wasn't on screen long before it cut to the next and the camera was always on the move, so you couldn't get a decent look at the sumptuous visuals and it didn't allow the audience to settle. What's the first thing a storyteller says to a child before telling them a wonderful story?
“Settle down now and I'll tell you a story”.

Some people were hailing this as a 'Gone with the Wind', but sadly there's just no chemistry between Ms Kidman and Mr Jackman to make it work as a romance. It's cold and distant. I felt that I didn't care about either character, even at the end - and they'd had ages to tug at the heart strings.


However, a bit like the 'Curate's Egg', it was good in parts, so let's talk about the good stuff.
The photography is stunning, the lighting is gorgeous and the rugged Australian landscape has never been so caressed by a lens. Director of Photography, Mandy Walker, has produced some breathtaking footage within the widescreen 2.35:1 frame. It looks absolutely beautiful and on Blu-ray, the pin sharp images are treated with great respect - but more on the transfer later.

Nicole Kidman looks wonderful. She could tie my kangaroo down, anytime she wanted. Her close ups reveal no lines or wrinkles and those amazing blue eyes - wow! (bucket of cold water, please).
Sadly, her upper class English accent left a lot to be desired and she just wasn't believable in the role. Credibility in a leading role is very important and whether she didn't receive good direction about her performance or was unwilling to take it, I don't know. I just can't believe that nobody spotted this on the set or while watching the dailies. You know if something's working or not by the feeling in your stomach.


Hugh Jackman did not have the same effect on me as the lovely Ms Kidman, but I'm assured that the shots of him with his shirt off do appeal to the female contingent in the audience. He puts in a fairly solid performance as Drover - that's the only name we know him by. So, we have a pretty leading lady and a handsome leading man, but what else do we have?

We have a little boy called Brandon Walters, playing Nullah, the half aborigine child - who also steals the movie from right under the noses of the two leading actors. This was his first movie and acting comes naturally to this young feller. He didn't so much act the role, he became it and lit up the screen. I think we'll be seeing much more of this talented young star in the making, in the near future.

Overall, it genuinely hurts my heart to have to say that 'Australia' just did not deliver the goods for the reasons given above. There are two main reasons to watch this movie - the cinematography and the performance of Brandon Walters.
Other than that you have to decide what else you could do with two and three quarter hours of your time.

Such a terrible shame.