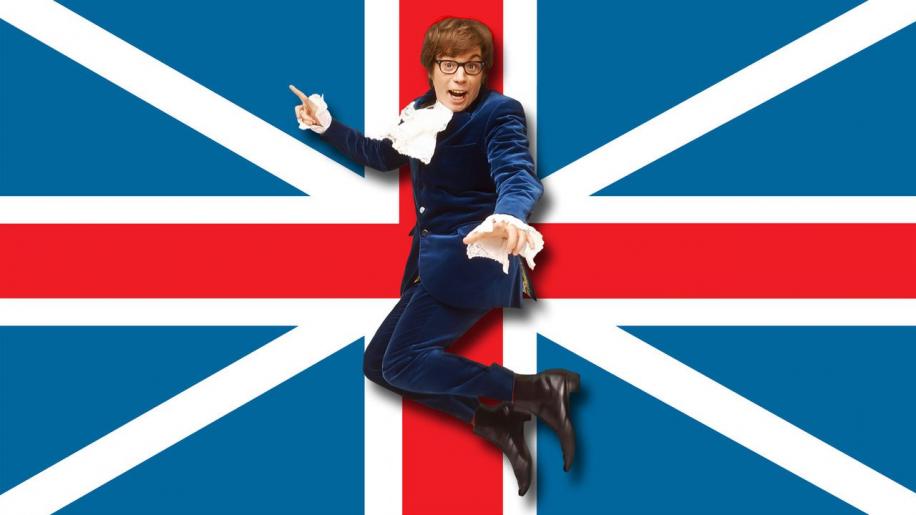 Over the years there have been many send ups, parodies and pastiches of the James Bond series but most failed due to the fact that the Bond films were already sending themselves up, largely thanks to the tongue-in-cheek frivolity of Jolly (Sir) Roger Moore's tenure. So anything that was going to work was going to have to be way over the top while retaining an affectionate view of what had gone before.
Not only was James Bond a target, but also movies like 'Our Man Flint', the Matt Helm series as well as TV shows like 'The Avengers'.
All of the abovementioned had such great style, wit and sense of fun that they had become iconic and therefore fair game.
So along came Hollywood cheeky chappie, Mike (Wayne's World) Myers in 1997 with 'Austin Powers - International Man of Mystery', now released on UK Region B locked Blu-ray - a movie that was the first of three 'adventures' for the cool super spy. Basically, it brought the art of sending up spy stories to a whole new generation who had not really witnessed such a thing before. The series improved with each movie. It has to be remembered that 'International Man of Mystery' was the first and, as such, had to feel its way for a direction to pursue. It was followed up with 'The Spy who Shagged Me' which improved upon the laugh quota and finally 'Goldmember' which is probably the best of the series - benefiting from a comedy turn by Michael Caine as Austin's father.

But to go back to the first one, 'IMOM', we are introduced to the character of Austin Powers in the 1960's as a trendy British fashion photographer by day, swinging Super Spy by night replete with velvet jacket and ruffled shirts. This was a time of psychedelia and free love where phrases like 'Yeah, Baby' and 'Smashing' had their origins - and this film caused a resurgence of their use in everyday speech in the late 1990's.
Our hero, played by Mike Myers, is in pursuit of the wicked Dr Evil - also played by Mike Myers - aided by his glamorous assistant Mrs Kensington (Mimi Rogers). As Dr Evil makes his escape by placing himself in cryostasis (that's freezing to non-scientists) and jumping into a rocket which blasts off to orbit the Earth. Austin Powers vows to be waiting for him when he returns so he too is frozen to ensure he won't be past his sell by date when he's needed.
Flash forward thirty years and our human ice cube is defrosted into a world where things have changed. Much to his dismay, Austin finds that the world is no longer sex mad and his out of date chat up lines just don't seem to work any more. The reason for his reanimation is that his nemesis Dr Evil has re-awoken in Nevada, has stolen a nuclear device and intends to hold the world for ransom. At first he was aiming for $1 million, but thanks to his Number 2 (Robert Wagner) persuading him that in the time he's been away inflation has spiralled, he ups the ante to $100 billion just to be on the safe side.
Meanwhile our hero Austin has a new assistant in the form of Mrs Kensington's daughter, played like a plank of wood (but a good looking one) by Liz Hurley. Naturally, Austin sees her as the helpless target for his romantic overtures and this provides some fun. There is also some amusement to be had from the names of Dr Evil's henchmen, Random Task (Oddjob - geddit?) and Alotta Fagina (well, you can work that one out for yourselves). Oh, behave!!


The action moves to Las Vegas as Austin and Vanessa Kensington attempt to thwart Dr Evil's plan, but the megalomaniac has problems of his own in the form of Seth Green as his angst ridden teenage son, Scott. The scenes between the two are quite hilarious as Dr Evil's parenting skills are tested to breaking point.

Will Austin Powers save the world from being held to ransom? Will he develop new social skills in time to succeed with Vanessa? You'll have to watch it and find out.

Just in case anyone is still expecting a serious message from this film, get with it Baby. It's written, designed, filmed, and acted with the sole intention of just having a good time. The humour does tend to focus on getting laughs surrounding bodily functions, penis enlargement and genitalia gags in general - so it's not really one for prudes. It's also not a comedy that'll make you think for days afterwards -or even at the time of viewing. It's a bit of fluff.
The sequence with the Fembots made me laugh out loud as Austin has to combat female robots with guns built into their boobies. It gives a whole new meaning to a 'pair of 38's'.
When I saw it upon its first release, I kind of missed the joke but now seeing it again on Blu-ray I realise that maybe I'm a bit less serious these days and can enjoy the knockabout humour more.

Mike Myers is great in his portrayal of the spy with dodgy dental problems and his Blofeld style Dr Evil is just as good with his stumbling attempts at dramatic moments.
If you haven't seen the two sequels, they're well worth a viewing but watch this one first. It's probably not a film that will impress the ultra serious Bond fans, but for those who can enjoy the parody, this is just their bag.
Yeah, Baby, yeah!