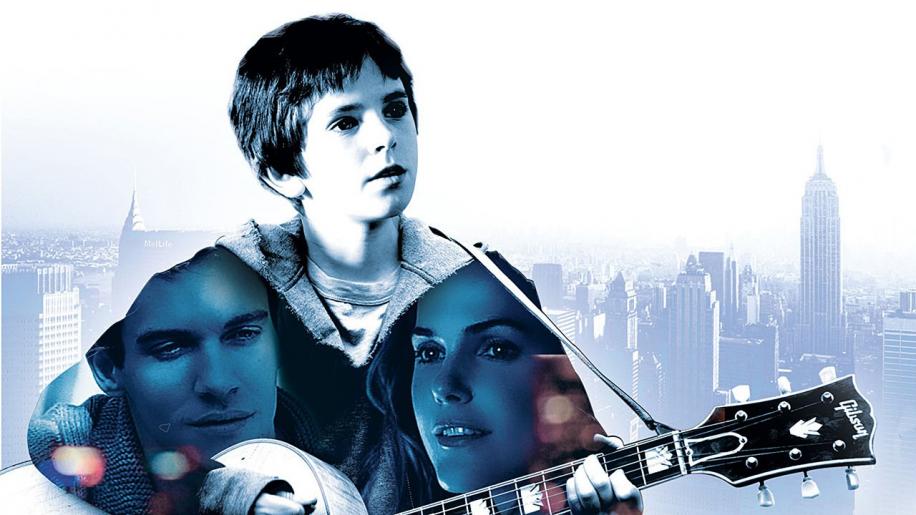 Painted broadly as a “grab-your-hankies” type of flick, Kirsten Sheridan's overly schmaltzy tale of a modern-day waif becoming a musical prodigy in the name of love, August Rush, is actually surprisingly light on chin-wobbling moments. Something about its blissfully obvious narrative and hugely manipulative nature cuts the strings of its emotional core with foolish abandon. The fact that it was written by James V. Hart is no shock. Having turned Bram Stoker's Dracula into an insipid, fawning Casanova and swapped bloody horror for a “two-hearts-that-beat-as-one” scenario, Hart has proven that he is just a big softie, with 2007's delightful The Last Mimzy under his belt as well. But even his co-writer on the screenplay, none other than Nick (The Shape from Halloween) Castle, is no stranger to this more innocent type of fantasy, having directed The Last Starfighter and written for Spielberg's Hook. So, really, this light-handed approach to what could have been a real tear-jerker (the film holds a Truly Moving Picture Award, folks!) is perhaps what lets it down. Instead of actually moving you, it merely coughs politely in the hope that you might hear it, and then move yourself.

Which is the cue for a great song very cornily rammed into the story at a woefully early juncture.

Eleven year old Evan Taylor (Freddie Highmore) sets off in search of the parents he has never met, led by a musical calling that has been written in the stars. A gifted musician, Evan can hear music virtually everywhere - the sound of cars or trains, or a basketball bouncing on the deck, or the cacophony of a bustling city street - and this is the key to his destiny. His parents - love-struck classical cellist Lyla (the incredibly gorgeous Keri Russell) and melancholic Irish rock guitarist-cum-rooftop Romeo Louis (Jonathan Rhys Meyers) - shared a night of passion beneath the full Moon before fate and circumstance - gigs for one and an over-zealous father for the other conspired to tear them apart. But with Lyla winding up pregnant and, with a professional musical career hanging in the balance, stress takes its toll and ...well ... let's just say that a small baby doesn't figure in her father's plans for her future. But with such musical parents, young Evan only has to listen to the clues wafting on the air currents to help set in motion a course of events that will bring the lyrical dynasty back together again. Along the way, he will fall in league with a Fagin-type character called the Wizard (played by Robin Williams), who lives, with his tribe of highly gifted young buskers, in a dilapidated old theatre tucked away in the throbbing metropolis, earning a communal crust that Wizard then creams off. But the music in his blood and the sound of the city provide Evan, whom Wizard takes under his wing and christens August Rush, with powers that cannot be contained, powers that will ensure the prodigy rises above the petty squalor of riffing for passers-by on busy street corners and inveigle his way to a scholarship at the renowned Juilliard School and a groundbreaking concert in Central Park.

Whilst Highmore - so damn good in Finding Neverland - does a fine job of bringing his left-field moppet to musical life, moving through the world as though in-tune with the elements, there is never a sense of jeopardy for the situations he finds himself in. Considering that he is lost and alone and possibly getting in with the wrong crowd, we should feel some degree of anxiety for his well-being. Yet Sheridan forsakes such a large component of the drama in exchange for a strange sort of quasi-mysticism that has Williams' sprinkle some Obi-Wan Kenobi gobbledygook into Wizard's street-smart guru. In his world, music is like the Force, some all-binding energy that flows directly from the stars and unifies everything together, but only a chosen few, like Jedi, can hear it. In Evan, or August, Wizard sees a kindred spirit, a fledgling talent whose power he hopes to harness, yet there is something dark about him that rears up in fleeting instances of anger and fear, something that is eager to clutch onto this valuable meal-ticket. Well, you've got to pluck a plectrum or two! Wizard is an interesting character, but one that is hampered by having too many pop-culture references shovelled into one body. I mean, as well as Fagin and Obi-Wan, Sheridan and Williams see fit to have him dress and strut like Bono too, which, to be honest, strains things a little and also makes Williams look, ahem, just plain daft. There is a clutching for poignancy in this set-up that, although ripped-off from Dickens, manages to work by sheer virtue of its cheesy audacity. It is just too bad that the other plot threads meandering about the film lack any similar sort of energy or genre-influenced panache to hold the interest.

Of course, it cannot help that nothing at all about this story is even remotely believable. You could argue that it isn't meant to be - this is a fable when all said and done and, to many minds, this is defence enough for its airy brushstrokes. But I just can't buy into the search for one another that the leading trio are making for one second. A little lost kid seeking out his natural parents? Yep, that makes sense. If the two dogs and a cat in The Incredible Journey can do it, then so can this tousle-haired explorer making his daunting first steps into the big, wide world. But not in the exasperatingly fate-led way that Evan goes about it, with providence seemingly helping him out at every turn and “Happiness -This Way” practically signposted for him. And for a movie that is perfectly happy to traipse along a fairytale path the social services angle is possibly the most ironically fantastical aspect in the film, seemingly thrown in as an arbitrary plot-shifter only when Castle and Hart realised that they needed to have some realism in there. The Robin Williams/Fagin shtick, although a neat enough gimmick at first, is actually a ridiculously paper-thin concept that I can't accept as taking place on the streets of an already weird Big Apple, his “Wizard” a rather obvious gatherer and exploiter of children who would probably have been knee-capped during his first day of operating. Blending flavours of nearly all Williams' onscreen personas to date, this guy would be far more comfortable in a rock-opera than a movie, where such a character would possibly be the star of the show. The Moon-struck, star-crossed lover pitch between Louis and Lyla is horribly contrived, too. Okay, this ship is sailing of the sea of whimsy, but their coming together, parting, searching and coming together again odyssey is the stuff of a photo-strip story in a teenage girl's weekly magazine. Louis pining over that one picture of himself and his lightning-quick lover and plucking forlornly at the strings of a guitar he is too frightened to pick up and play properly is squirmingly trite. Lyla's father (played by William Sadler) makes the kind of hospital bed confession that we all saw coming a mile away and as the three plots merge, the film doesn't so much gel in a charming symmetry as entwine in a big clumsy knot that we were poised to tie within the first five minutes.

“He said he's following the music - the Moon told him to. The kid's a space cadet.”

But it is not all bad. The film is bolstered by some wonderful cinematography from John Mathieson who scrubs up New York to a crisp wintry sheen. The locations are great and even if New York always looks uniquely filmic, with an atmosphere that literally bleeds through the screen, August Rush still manages to find some new angles and views to showcase. In fact, in many ways, this film has scenes that feel as though they have been purposely composed as the exact visual opposites of the recent I Am Legend - featuring many of the same locations only this time filled to brimming with people, life, colour and, above all, sound. Sheridan also creates some decent, almost surreal moments when August locates the hidden pulse, or symphony, that his surroundings are making, lending the film a heightened reality that its cliché-drunk script can't equal. The mood, too, is one of romance, cosy villainy and softly sketched motivations, which is supposed to wrestle away any of the darker themes that could inadvertently arise. There is ample ground for a good story here, but the writers are too concerned about keeping things bubbling away within the “Nice” half of the narrative sphere to allow some danger to spice things up. Dickens did it and ended up with a timeless classic. Sheridan dilutes her main influence and, in the process, lessens the quality of her movie melody.

Still, the film wears its fable-intentions proudly with a whimsical story held together by flimsy threads of incidental drama, the whole thing never once deviating from its star-struck destiny. But whilst Oliver Twist throws curve-balls almost constantly and the feeling that things may not necessarily end up in clover is an ever-present concern, August Rush is quite happy to leave the viewer in no doubt whatsoever how things will all turn out. In the scheme of a contemporary urban fairytale, however, this works just fine. I mean, nowadays, to have a gaggle of urchins under the dubious street-tutelage of a strange man who houses them on the fringe of society could be highly objectionable, let alone morally questionable. So, it is perhaps blithely courageous or just foolhardy of Sheridan to depict such consequences so openly and without any subtext. For Nick Castle and James V. Hart, the music is only a tenuous hook upon which to hang their tale. It conducts the screenplay, but the main impetus of the plot is, as always, simply governed by love and family and the notion that home - metaphorically speaking - is most definitely where the heart is. Beyond that, there really isn't much more that I can say about this meagre offering. Deeper resonance is not the order of the day, but the case that August Rush states quite smugly is that small-scale, emotionally charged dramas have their place, too.

But there is simply too much contrivance for me, personally. A strictly by-the-numbers flick that may entertain for its duration, but will fade all too quickly from memory once the show is over. This gets a 6 out of 10 purely for Freddie Highmore's involvement.