Planar magnetic drivers and wireless audio for under £300, yes please! 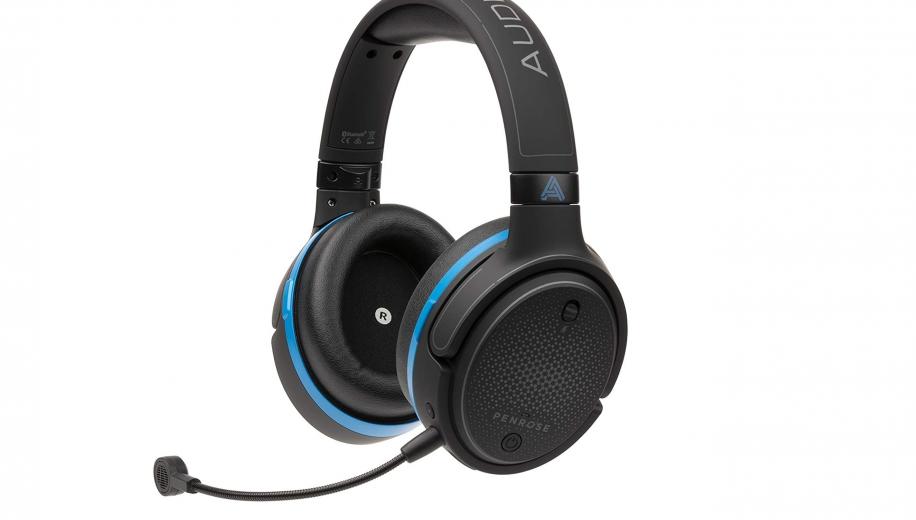 What is the Audeze Penrose Wireless Gaming Headset?

Our first experience of high-end brand Audeze was with our review of the excellent Mobius headphones last year which, whilst retailing at an eye watering £400, were one of the best gaming headsets we’ve ever tested. With a superb audio quality, excellent gaming performance, 3D audio, design and comfort it was a set that we now use on a daily basis.

The only slight negative with the Mobius is that they are wired only. Thankfully, Audeze has released the Penrose headset, which ticks most of the boxes that the Mobius set did, but with the added benefit that they can now be used wirelessly for gaming, not just for audio.

Retailing at £299, they are still very much a premium gaming headset. Featuring the same 100mm Planar Magnetic Drivers of the Mobius, they look to be a great alternative, although the Penrose is purely a stereo headset. The head tracking, 3D emulation and 7.1 surround sound of the Mobius are sacrificed, presumably to meet a lower price point. Given our superb experience with the Mobius, we have high hopes with the Penrose. Read our full review to see how they perform….

It still has the same excellent build quality and feel to it, but the bright coloured band does detract slightly from the look. But looks aren’t really a priority with a gaming headset as once it is on your head it doesn’t matter what it looks like! The headband is adjustable to suit most head sizes with the earcups supporting 15° of inwards rotation and 35° of vertical adjustment to allow the best fit. They also rotate outwards 90° for storage.

The earcups and the headband feature artificial leather effect contoured memory foam and compared to the Mobius the Penrose weighs slightly less at 359g. During our testing they were as comfortable to wear as the Mobius and even after (too long) gaming sessions we did not suffer from overheated or sweaty ears that we used to get with our cheaper Logitech gaming headsets.

As with the Mobius, the controls are all found on the left earcup. To the exterior we have the microphone mute switch, LED light and the power/Bluetooth pairing button, then to the base are the multi-function button, detachable boom mic connection, USB-C charging connection, 3.5mm jack and separate volume controls for the headphones and the mic.

The multi-function button replaces the 3D button of the Mobius and is used to change source and pair with the wireless dongle. The power button is the real multi-function button as it can be used to play/pause audio, answer/end a call, reject a call, pair Bluetooth and power on/off. The headphone and volume control wheels also feature additional functions, double clicking the headphone volume wheel will link back to the last Bluetooth host device and pressing the microphone volume wheel and scrolling up/down which change the game chat mix adjustment.

Out of the box (which isn’t quite as nice as the Mobius packaging) we get a 3.5mm aux cable, USB-C to USB-C cable and USB-C to USB-A cable, the wireless USB dongle and the detachable microphone. Gone is the rather wittily written instruction book, replaced with a quick reference guide. Whilst this is still a high-end set, the Mobius is clearly still the Daddy.

The Audeze HQ App is available on the PC and on Android (no iOS at time of writing). The MAC version of Audeze HQ currently doesn’t support Penrose but a new update is in the works.

For both Android and Apple users, the Bluetooth codecs supported are SBC and AAC. No support this time for Sony’s LDAC codec. AptX and aptX-HD are not supported.

As with the Mobius, the setup is quite simple. Turn them on, press the power button twice and pairing is started. The wireless dongle pairs automatically. It’s as easy as that!

The different audio modes of the Mobius such as the 7.1 and Hi-Res mode are not present in the Penrose as it is purely a stereo headset but, even with the lossy limitations of Bluetooth, the audio quality was superb and on par with the Mobius, which is amongst the best we’ve heard with a Bluetooth headset. Using the wireless dongle which has a 2.4GHz high bandwidth, fully lossless, 16bit/48kHz connection with a low latency of 16ms, the audio quality is even better.

Testing with a variety of sources including Tidal, YouTube and music via our PC and smart device, across the board the audio quality was superb with a definite improvement using the USB dongle compared to Bluetooth. With tracks such as The Sound of Silence by Disturbed the vocals were crisp and clear and the audio presentation was extremely detailed. Bass heavy tracks such as Angel by Massive Attack again showed just how good the headset is. The bass level is spot on with a definite weight to the bass without being overpowering.

For gaming, the quality was again excellent. Not on par with the Mobius though, as its gaming features really add another level to gaming audio, but even with just stereo the audio was excellent, feeling very detailed and perfect levelling.  Testing with the likes of Battlefield V and Cyberpunk 2077 it was as immersive as you are likely to get with a stereo only headset.

The microphone quality was excellent, as expected. Not quite sure it was ‘broadcast quality’ as is claimed on the packaging, but the sound quality was good and background noises were cancelled out. The mic is detachable as with the Mobius and there is no raise to mute function as you get with headsets that have integrated mics. You can either yank the mic out which isn’t to be recommended or simply toggle the switch on the side, which whilst not as quick as raising a mic to mute, shouldn’t be too far behind.

The various controls on the headset are simple to use and with some of the various functions being split across both the power and source buttons, it doesn’t feel like you are trying to accomplish too many tasks with one button. As with the Mobius, there is no simple power switch which is a real gripe of ours on headsets, you have to hold the power button for about 3 seconds to turn it on or off.

The wireless dongle worked without any real issues. It connected quickly and there were no cut outs or distortion. It does have a couple of annoyances though. If you have your PC on with the USB dongle connected, change to Bluetooth connection and then start walking around the house listening to music or taking a phone call you will get a voice constantly saying ‘connected’ as the wireless connection to the dongle drops in and out of range.

The battery life is excellent. During our testing we didn't quite get to the 15 hours claimed, but it was very close. They do charge in around 3 hours.

The Audeze HQ App for the PC allows you to easily update the firmware, change the microphone volume and the mix scale between gaming and voice plus create up to 5 of your  own custom equalizers. The Audeze HQ app only works when the headset is connected via the cable, the audio doesn’t change as that is always via the dongle if it is connected. With Windows it doesn’t recognise the Penrose as a headset, which means the volume controls in Windows or any apps have no effect. To change the volume, you have to use the controls on the headset itself. We don’t have an Android device so cannot test the smartphone app.

For £300, the Penrose headphones are another excellent addition to Audeze’s range. With a company that sells $4,000 headphones you know there is a certain pedigree and quality in their products and, as with the Mobius, this is what we experienced with the Penrose.

Featuring 100mm Planar Magnetic Drivers, which you are usually very unlikely to see in a headset costing £300, the audio quality across the board was excellent. Whilst not having the additional audio features of the Mobius, with Bluetooth 5.0 and especially using the USB dongle the audio was detailed, balanced and the bass was sufficiently weighted.

The headset is extremely comfortable to wear, even after prolonged gaming sessions and the controls and functions are easy to use. It all works without any real issues save for a voice that keeps saying ‘connected’ if you using the Bluetooth connection but still have the USB dongle powered and are walking around the house in and out of the dongle’s range. The only other negatives are that there is currently no iOS app and the the PC Audeze HQ App only works with the headset wired.

For the gamer, the Penrose and Mobius are amongst the best gaming headsets you can buy today. If you can suffer a cable and can afford the extra £100 then our preference would always be with the Mobius, but if you must have wireless and just can’t warrant paying £400 for a headset, then the Penrose from Audeze is recommended.