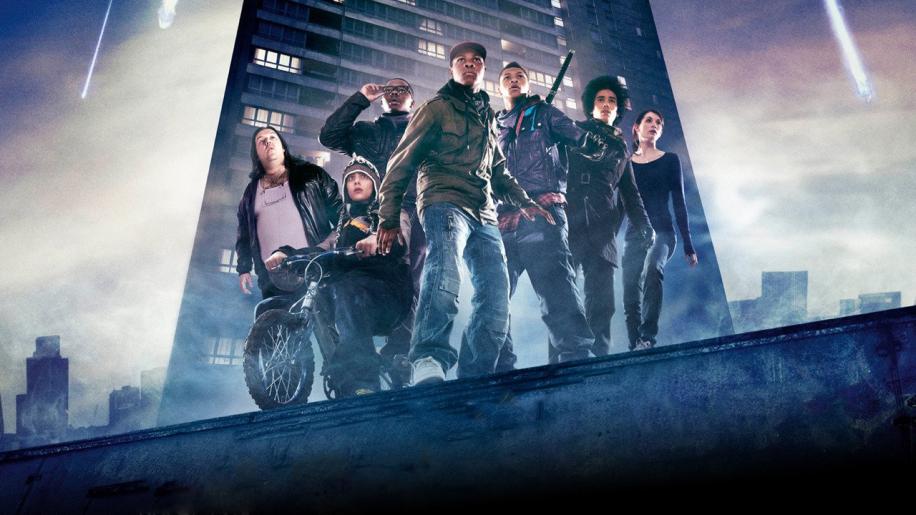 So a friend of mine updated his fb status (give me a break!) with a question: “Do I see Thor or Attack the Block?” and it got me thinking about these two current releases, neither of which I had personally seen. For me, Iron Man 2 was a bit of a disappointment in comic book superhero adaptation terms, and I was so wary of them now that Thor was well off my radar. It’s not like the Norse-ish demi-god hammer-wielding character has ever been of any great interest to me anyway. But I’ve heard good things. Not amazing things, but good nonetheless, not least from fellow reviewer Chris, who covered it recently. So even though I had not seen it, I had a clue about Thor – I could at least pass on a recommendation about it. Attack the Block though? I mean, I’d heard about it, but not much. Aliens invade a Council block in London. That’s what I’d heard. But I didn’t know whether it was a comedy or a drama, a thriller or a horror. Turns out, it’s a bit of all of those elements.

It’s 5th November and fireworks are erupting all over London. But on one particular Council estate they’re not the only things that light up the night, as a run-of-the-mill street mugging gets disrupted by a meteor-like landing in the middle of the street. The muggers – a gang of young teen hoodies – investigate the crash site only to find a strange and violent creature, which they promptly bludgeon to death. Taking it as a trophy, they wonder what the hell the animal as, considering that maybe, just maybe, it’s from outer-space. And sure enough, it’s not long before a dozen more meteor-like object strike the estate, bearing the same kind of creatures. Only bigger, and nastier. With the police locking down the area, it appears to be up to this gang of muggers – and their victim, a nurse – to defend the Council block they live in.

Given that the movie is from the production company that gave us Shaun of the Dead and Hot Fuzz (and Scott Pilgrim – but that one just didn’t work for me), you should know just what to expect on this. The director, Joe Cornish – of Adam and Joe fame – is busy scriptwriting for the likes of Tintin and the new Ant Man movie, but in the midst of it all he’s given us this low budget (£8 Million) indie flick in the same vein as the other movies the production company’s history – this time a modern day take on such tongue-in-cheek sci-fi horrors like Gremlins and Tremors, only with hoodies. Yes, this baby is quintessentially British, focussing on a staple element of current Brit urban existence in much the same way that cockney crooks were key to The Italian Job all those years ago.

You may not think that they could make a movie with hoodies as the ‘heroes’. Sure, teen mayhem on council estates has been done before in the likes of Kidulthood and its sequel Adulthood (and mocked in Anuvahood, all by the same production team), but these films never even tried to make them people to root for. Sympathise with, maybe, but even that was quite tough. Attack the Block immediately introduces us to a bunch of mid-teen bike-riding hoody-wearing Council estate kids who spend their nights mugging innocent people trying to get home – showing them preying efficiently and mercilessly on their latest victim; holding a young nurse at knife-point, and relieving her of all of her belongings. Led by Moses, the quintet prove themselves to be quite a typical bunch of intimidating hoodies, and you honestly wonder whether you can handle an entire movie following them around. Speaking in almost incomprehensible street lingo, saying silly stuff like “Allow it”, as if they spoke only in curt text message form, it seemed almost impossible to think that you may ever like these characters.

But the plot – and the script – take all the turns least expected, never pandering to the audience, eschewing the homage-ridden path of the other productions loosely of the same ilk (Shaun, Fuzz), and thus never lapsing into predictability as a result. Soon you’re laughing with the characters, not just at them, the dialogue poignant and sharp – and resoundingly funny, despite the action being played utterly straight. And it works. Gradually, over the course of the movie, you get to know the characters and start to actually like them. All this without the need for all the tragic backstories and woeful plight that normally gets thrown in so that you may appreciate these lost souls. No, Attack the Block avoids cliché at every turn, and is quite a refreshing watch as a result.

The child performers are all local lads, apparently – not trained actors – and they are arguably even more impressive than the one or two familiar faces (Nick Frost and Jodie Whittaker), not least the head honcho Moses, played superbly (well, apart from that “Allow it” catchphrase) by newcomer John Boyega. And sure, you may be concerned about the difficulty comprehending the South London slang, but it really isn’t that hard once you get involved in the movie. You know exactly what they are talking about, or can at least hazard a pretty good guess – and this is the reason why the film has gone down so well in the States, despite the unusual dialogue.

As stated, Cornish excels not just in the dialogue, which effortlessly flows from the straight-from-the-streets cast, but also his direction of the story – which plays out like John Carpenter’s Assault on Precinct 13 (complete with reminiscent beats) as the core members try and defend their apartment block from a bunch of creatures that looks like a splice between a Gremlin, a werewolf and the aliens from the Alien movies. Cornish effortlessly follows the action, ladling on the horror jump moments a bit too thick, but otherwise getting the in-the-trenches feel just right, and never betraying the relatively insignificant budget that he was working with, except perhaps towards the tail end of the opening credits.

Personally, I thoroughly enjoyed Attack the Block. It’s not a perfect movie, but it is a very entertaining one – and I have to say that the whole experience was massively enhanced by seeing it in a packed cinema. Whilst walking past a legion of cinemagoers all dressed as pirates (I have no idea what they might be seeing...), I was disdained by the notion that modern audiences were still being suckered in by a blockbuster franchise on its fourth instalment – despite the fact that the last two were absolutely terrible. I just figured the auditorium for Attack the Block would be empty. But it wasn’t – hell, even the VIP seats were talking (by a bunch of fiftysomethings trying to be hip). And, for all the faults the movie may have, I can’t deny that it appears to have a truly broad audience appeal. Everybody was laughing. From the teenagers who probably shouldn’t have been allowed in to a 15-rated film, to the young couples on dates, to the aforementioned older class of audience member. They loved it – lapping up the witty lines and alien language, jumping at the jump moments; attention seemingly grabbed throughout. In fact, I can’t think of better praise than for this movie to be lapped up by teenagers – it’s easy to make a movie about teenagers which only teenagers love, or which only adults like; but it’s hard to make one which appeals across the board. Particularly a sci-fi-horror-comedy-drama. Attack the Block succeeds on all counts, not just further cementing Joe Cornish’s position as a talented upcoming young writer/director – one to watch – but also managing to break free of all expectations from its loose predecessors Shaun of the Dead, Hot Fuzz and Scott Pilgrim. It’s a different kind of movie, even if it comes from the same extended family, and it stands apart as a quality new indie offering that simply doesn’t play by the rules.

Thor will be around for a while, and I’m sure it’ll be just as entertaining when it’s released on home format. Catch Attack the Block while you can – and hope for a packed cinema full of patrons with little knowledge of the film, and even less expectations. It’ll be a whole load of fun, proving once again that you don’t need to spend a ridiculous amount of money on a movie to make a critical and commercial success. Recommended.

Always on the look out for a quality new indie production, Attack the Block comes recommended. From the same production company that gave us Shaun of the Dead and Hot Fuzz, Joe Cornish's directorial debut takes us to a South London council estate, where his dialogue works wonders coming out of the mouths of a bunch of local lads (not professional actors) - a group of teenage hoodies who have to protect their apartment block from an alien invasion. Don't worry, this isn't Battle: UK, but more like a modern update on Gremlins or Tremors, infused with some witty and thoroughly entertaining lines, and an unusually unpredictable script which will likely have you hooked right from the outset. I'm sure there will be plenty of bigger, flashier movies out there as summer blockbuster momentum builds up, but it's still nice to know just how much a talented writer/director can do with a great idea and a little money. Despite only having been released a little over a week ago, I'm not sure how long this one's going to stay in cinemas, so catch it while you can.