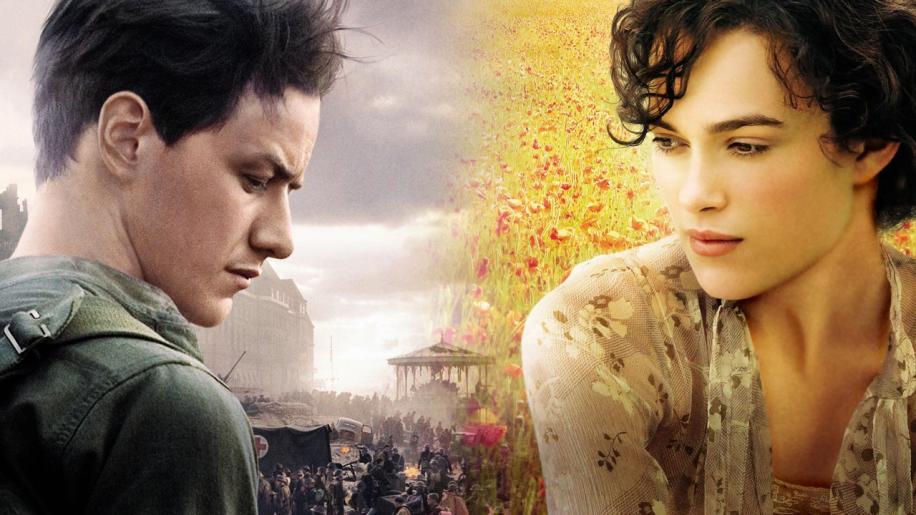 Remember the bad old days of the HD format war, when blue in one corner and red in the opposite slammed it out for a winner takes all title? How different that outcome might have been had Universal not shelved their support for the red top. In March 2008 Universal released their final HD-DVD disc, Atonement. That release was well received had excellent video quality and was perhaps only let down by a somewhat thin audio track and the lack of some quality extras. Universal have now, finally, ported over this incredible film to the winner of the HD tug of war, Blu-ray.

It's somewhere in England on the hottest day of the year in the summer of 1935; the well to do Tallis household are looking forward to the return of their son and heir, Leon (Patrick Kennedy). Youngest daughter, Briony (Saoirse Ronan, and as she matures also played by Romola Garai and Vanessa Redgrave) is composing her first play, the mother retires to her bedroom, resting after a heat inducing migraine. Eldest daughter, Cecilia (Keira Knightley), in between flirting/arguing with the son of the gardener, Robbie (James McAvoy), whiles away the hours until dinner. Leon arrives with long time friend Paul Marshall (Benedict Cumberbatch) and all, at first seems well. During dinner however cousins of the Tallis' go missing and a search is undertaken to try and locate their whereabouts. It is during this incident that a fertile imagination and brief glimpses of a shadowy figure will ruin lives forever.

By all accounts this is as good an interpretation of a novel as you're ever likely to see. Ian McEwan, who wrote the original text, was on hand as executive producer, but in the end he let the writing team of Christopher Hampton and director Joe Wright more or less have full say in how the final version should look on the big screen. He was wise, and big, enough to understand that concepts written in prose would have to be transformed somewhat for their move to the silver screen. He understands film is a different medium and left control to people who knew far better than he on how to exploit that medium. His lack of interference worked wonders, because what we have ended up with is one of the best films of the first decade of the 21st century.

The film flows incredibly well, and that is not only a credit to the original text, but also to the combined efforts of, primarily, Hampton and Wright. The narrative rarely slows even though at times it seems to drift along; it is never aimless, with each and every scene only building to produce a much greater whole. Every scene is worth its weight in gold, each as important as the last in telling a gripping story which totally draws you into the characters and the period they live in. At first some scenes may appear throwaway, as though they are not relevant or overly important; it is only later do you understand how well all of this production has been crafted, how well earlier jigsaw pieces fit into the whole.

The cinematography is sublime almost allowing the viewer to feel the balmy heat in the opening third of the film; during the middle and end acts however we get harsher contrast, scenes with more impact and realism and in one incredible 5 minute steady cam shot almost relive the beach at Dunkirk as thousands of British soldiers make good their escape back to Blighty. This one shot, no cuts, no edits, is absolutely superb. Traversing the multitudes of wandering souls along the beach, in and out of bandstands, around small merry go rounds, across discarded vehicles where animals are slaughtered so they do not fall into enemy hands. The organisation which went into this one scene alone must have been some undertaking, it emerges as one of the best shots of recent times and like the writing team for their efforts the camera crew must be applauded for their efforts here.

Director Joe Wright isn't new to this kind of historical drama, having already had Pride & Prejudice and certain episodes of Charles II under his belt. He does though show a maturity beyond his years in taking such an emotional journey and transcribing it to our screens with such aplomb.

Another high point of the film has to be the musical score by Dario Marianelli. He manages to intermingle the stamp of typewriter hammer on paper, or the ratchet of typewriter block as it's moved up or down into the orchestral score. He succeeds in merging other sounds from the film, such as Robbie's mother (Brenda Blethan) hammering on the bonnet of a car or the low hum of distant aircraft as they soar high overhead. He was rightfully nominated for an Academy Award for his efforts and justly carried off the gong that particular evening. Atonement was also nominated for a further 6 Oscars however it only emerged with that one statue for the Best Music. That in itself is a great shame. Saoirse Ronan was given the nod for her fanciful young Briony and she does put in an incredible performance but it is two others that you should be keeping your eye on: Keira Knightley and James McAvoy.

Truth be told I have never found Ms Knightley to be a top actress, she has always come across as a little too insipid for my particular tastes. She might well draw the audience and does a good turn as a pirate's first mate, but she's never really done that much that has grabbed me or made me sit up and take notice. All of that changes though with this production. She seamlessly fits into the role of aloof snob, acknowledging her love across the class war with Robbie before finally coming to terms with her role in life during the Second World War. I shall pay more attention to Keira Knightley in the future.

James McAvoy deserves a special mention though. He wades through this film displaying the full gamut of emotions, from delightful summer joy, embarrassment, longing, love, despair, disbelief and incredible anger. It's a powerhouse of a performance to watch, carried off by someone who, like the director, seems to be showing a maturity far beyond his years. I have always had some respect for the minor roles he has played in the past and it seems that Atonement can only propel him onto much greater things. I was shocked that he never received any nomination himself, perhaps I'm biased because he's Scottish. That being said the upper class Cambridge inspired English accent he dons is a world away from his usual Port Glasgow dulcet tones.

Atonement is a film I can constantly return to and on each viewing concentrate on something different: the cinematography one day, writing the next, the dedicated acting performances from all who partake. It shocks and moves me every time I see it, it still leaves me in wonder and for any film that is only a good sign. I would have recommend this back in the heady days of HD-DVD and I can only recommend it here today. A superb film which I believe should be in everyone's collection. This is not a rental, not a throwaway disc but one to be cherished.