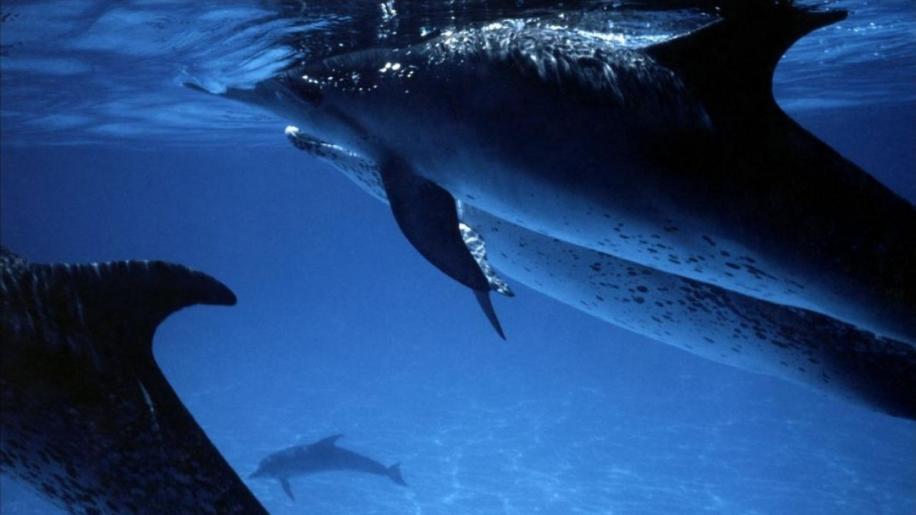 'Atlantis' was released in 1991 and was directed by France's most famed director, Luc Besson ('Leon', 'The Fifth Element'). Without doubt a highly accomplished director, Besson also has a deep love of the ocean; 'Big Blue' being his only major previous release which touched upon his fascination with marine life. Like Cameron, who went through a phase of obsession with the Titanic (he made several documentaries and a small budgeted movie about this famous ship!), Besson also seems to be flexing his artistic muscle with this release. This is a very strange movie in that, aside from a short, introductory monologue by Besson, it features zero commentary; the viewer is left undisturbed to merely enjoy the wonders of the deep without any interruptions. The piece was filmed over a period of two years in diverse ecological locations such as The Great Barrier Reef and the Galapagos Islands.

The movie opens with the brief aforementioned monologue, which outlines how the viewer should cast aside their preconceptions of what to expect from this piece and to simply let themselves become lost in the uncontaminated world of 'Atlantis'; where man was first borne (i.e. we ourselves originated in the oceans) but no longer dwells. This slightly pretentious instruction is accompanied with some ambient “human bustle” effects such as ringing phones and the piercing intrusion of a jackhammer. These gradually fade away as the viewer descends into the ocean and is lost in its tranquillity, with Besson framing the light from the world above as we descend into shallow seas. From this point onwards it's fish, fish and more fish as we almost casually observe a whole host of marine animals in their natural habitat. We get to see some playful dolphins (from the Bahamas), a striped sea serpent, iguanas (from the Galapagos), seals, manta rays, turtles and Great Whites (from Australia) to name a few. There is also plenty of footage of other marine life scattered throughout but the listed animals are the main “characters” of piece and get the lion's (or should that be sea-lion's!) share of on screen time. No one animal is shown doing anything over-spectacular; they are simply captured carrying out their daily tasks but often this in itself makes for some fascinating viewing.

Captions are included at various interludes to give guidance on the intention of the content. While no doubt useful (made less useful by the fact that I could not get my subtitles to work!*), they can somewhat disturb the poetic nature of the piece; directing the viewer to where Besson wants them to be (with regards to interpretation of the piece) as opposed to just letting the audience draw their own conclusions. In saying that, some of the content is very ambiguous and a little direction, such as captioning, can go a long way towards avoiding confusion and boredom. Many comparisons are drawn by Besson between marine animals and creatures that dwell above the aqua-world (which covers 70% of our planet). This fact is accentuated when the camera itself inverts (which can bring on a wave of surprising nausea!), with the depths of the ocean floor becoming the sky and the thin ocean surface becoming the earth beneath it. This is a very strange sensation but one which also draws very interesting parallels between topside and undersea landscapes. A prime example is some of the footage of The Barrier Reef, which contains some incredible structures resembling a Gotham cathedral, with ghostly, majestic spires of reef reaching towards the ocean surface.

The photography is top notch throughout and really exposes the hidden beauty of the ocean, even surpassing 'Planet Earth' with the sheer artistic integrity of its content. Where it does fall short in comparison to 'Planet Earth' (a personal benchmark for all nature documentaries) is that it lacks the knowledgeable presence of Sir David Attenborough (or a comparable alternative). But truth be told, I find all nature documentaries lacking without good auld Dave's dulcet tones. How and ever, both Besson and director of photography Christian Petron deserve praise for the quality of the footage captured for 'Atlantis'. The always exciting Great White segments are impressive, especially the proximity of the camera to these magnificent beasts; their powerful grace and frightening speed concealed by a calm and slow pace - a true master of the ocean who moves at its own pace, fearing nothing (it has no natural predators). The Giant Octopus, who dwells in the seaweed saturated coastline of Vancouver, is another stunning example of the footage which is unique to this piece. This surprisingly majestic creature resembles a large alien spaceship, causally and silently gliding through its domain, complete with an eerie theme. The opening scenes capture a huge shoal of silver coloured fish that are completely indistinguishable from each other and resemble a hazy swarm of locusts until they move in unison. When they do they become an enormous silver rippling blade, moving with speed to cut a swath through the depths of the ocean. During the dolphin segment, the camera takes on the dolphins' point of view and swims along with their school, seemingly enjoying their playful nudges and chatters of excitement. The camera also captures some unusual sunlight-on-water shots, which create a rippling and glowing effect, which is very pleasing to the eye. There are also some beautiful subtleties captured throughout; the enormous manta ray appears to sing along to the operatic musings of Bellini (for which he receives a fishy clapping ovation!), with the Florida manatee seemingly holding his hand/flipper up to his face in embarrassment, following a collision with the camera. These and other marine nuances, I'm sure, were included by Besson to highlight the character of these creatures so that the audience would not simply regard them as dumb beasts. Besson also includes the chattering of various birds during one of the scenes involving The Great Barrier Reef, perhaps to highlight the fact that although the Reef's inhabitants make no sound, it is teeming with life nonetheless, much like our protected rainforests.

The score plays a major role in this piece as it's the only aural accompaniment available (aside from some ambient effects). Eric Serra, who penned the score for 'The Fifth Element' as well as providing songs for both 'Subway' and 'The Big Blue', provides the music for the entire presentation (the only exception being some Bellini which features during the manta ray sequence). Serra grants each of main players in the piece their own theme, which for the most part really suits the characters of the creatures. For example, the striped sea serpent has an Indian snake charmer tune, which accentuates the undulating, mesmerising nature of the serpents swimming technique. The sharks are given a much weightier and menacing theme with a lively electronic rock theme for the hyperactive seals (whose footage is speeded up). The pacing of the movie is almost spot on and I found the run time to be almost perfect for the content. Although it can dwell for a considerable portion of time on some of the creatures, it moves along to the next specimen just in the nick of time, closely avoiding viewer boredom. The score also serves to inject some pace into proceedings, as do some of the camera techniques, such as the barrel rolls and sped up sequences. Although reminiscent of a planetarium rock-light show on occasion (as the camera quickly cuts from creature to creature to a Prince-esque techno-funk beat), the content is very well presented as a whole and really serves to faithfully portray the beauty of the ocean and the grace of her inhabitants. 'Microcosmos' is the movie which 'Atlantis' most resembles in that it's an artistic representation of marine/insect life with little or no commentary. In the case of 'Atlantis'........ I came away with a greater appreciation for the life which exists in a world that we don't normally get to see.


The only portion of the movie that I felt didn't really fit in was the inclusion of the sex-scenes, wherein we're treated to a cacophony of marine coitus, set to the awful tune of a woeful pop/love song. The movie does spiral slightly out of control at the end, with the inclusion of a lot of mysterious images, which seem to imply the end of days via a seemingly empty sea. I'm not too sure what Besson's intentions were here but it's obviously something to do with his undying love of the ocean. Perhaps the intention was to indicate that although the ocean is an unseen world (as indicated in the closing scenes) it, like the rainforests of “topside”, is teeming with rare and unusual life and beauty. The ocean is filled with creatures that have their own unique characteristics, some comparable to our own. If we neglect our oceans then this life will be lost, leaving them dead and barren forever. This is without doubt one of the strangest Besson flicks but one that he has obviously invested a lot of time creating, which is clearly evident in the finished product.

*English subtitles are available on this release (and are the only available subtitle option) but unfortunately I could not get them to work. My review copy for this movie is an unfinished one so I'm sure that this issue will be resolved in the finished pressings.