Big but most definitely beautiful, if perhaps a little pricey 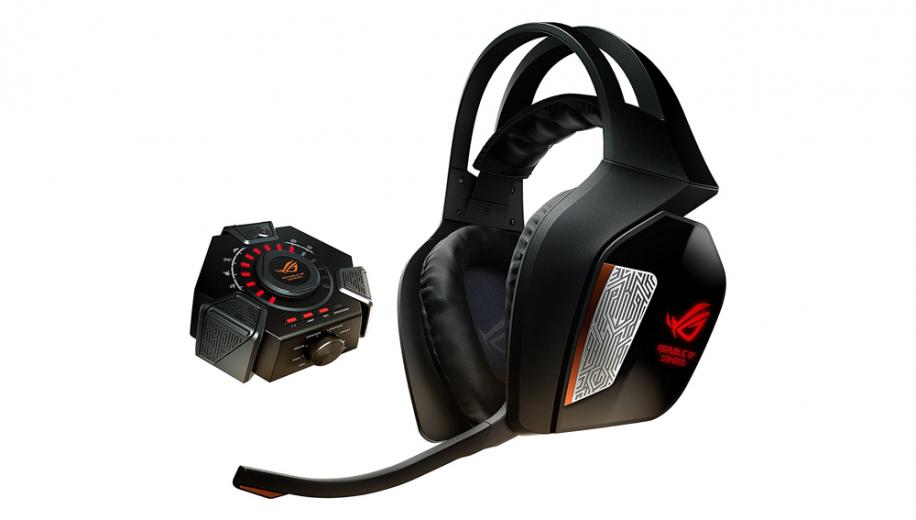 What is the ASUS ROG Centurion 7.1?

For those of us who love PC gaming, there are a few key products that can alter the overall experience to a great degree if you buy one that doesn’t suit you or is on inferior quality. From a high-quality gaming monitor and a comfortable multi-button mouse to a mechanical gaming keyboard, each of these if correctly chosen will ensure you get the best gaming experience possible, providing you have the rig to back it up of course.

Another item we consider to be very high on the important-to-get-right list is a decent gaming headset. Available from just a few pounds right up to well over £200, there are many different options available from wired, wireless, stereo, pseudo surround and the high-end sets with true 7.1 surround sound and whole host of other gaming features.

Our review item today from ASUS is their ROG Centurion 7.1 true surround sound Gaming Headset. This is very much at the high end coming in at £220 and appears to be one of, if not the most expensive gaming headsets you can buy. With true 7.1 surround, 10 individual sound drivers, Hi-Fi grade ESS headphone amplifier and much more, it offers a lot but then it needs to at £220! Read on to see how it gets on during our tests...

It’s huge! There is no escaping the size of this headset which to start with comes in a very large box. The Centurion is a wired headset and weighs in at a hefty 491g compared to just 372g of the Logitech G933 for example. Don’t let the size and weight fool you, this is a very comfortable headset. Initial impressions were one of slight concern as we put it on our head for the first time, but that very quickly disappeared as we got to feel just how comfortable it was. The photo below shows a comparison between the Centurion on the left and our Logitech G933 on the right. Compared to our normal headset, the Logitech G933, the Centurion is much nicer to wear. With its headband that has been developed to provide optimal clamping force, plus a choice of ear cushions between memory foam and protein leather, it is so comfortable you may forget you are wearing it, even with the extra weight it brings. Get immersed into your favourite game and you could find time has simply disappered. Even after long gaming sessions you don’t feel like your ears are slowly reaching boiling point or that it has developed some kind of death grip on your skull. All the cables are braided and feel very high quality. This high quality slightly works against the headset as the cable is so thick and rigid, it often gets in the way and if your PC is on your right, you may find it slightly awkward to get everything positioned correctly as the headset connects firstly to the USB audio station, then to your PC or MAC (let’s not forget those guys).

The Centurion headset comes with a plug and play USB audio station. This multi-function unit allows for full control of the headset, from changing the lighting effects, providing its own onboard environmental noise cancellation, in game audio profiles and headphone amplifier. It also provides a level of flexibility not often seen with gaming headsets as the audio station via the included cable can also be connected to a set of speakers with a simple one touch button to switch between headset and speakers and it will pass through the surround sound too.

Initial setup wasn’t a fantastic experience as the quick start guide is not the most helpful you will come across. Connection is via a HDMI cable from the headset to the audio station, then from that to your PC via a USB Y-Cable which will unfortunately eat up two USB ports. Losing an extra port might sound disappointing but with the features the Centurion gives you it’s a small price to pay. Moving onto the audio station, it’s a strangely designed and shaped little box. To the front is a mode selector wheel which is used in conjunction with the main toggle wheel for altering the volume of the various audio channels and changing the lighting effects, plus when depressed it switches to the spectrum selection mode where you can change between the 4 spectrum presets such as FPS immersion, FPS footstep, Action/RPG and Racing. Four buttons to the top allow you to turn on and off the surround sound, amplifier, microphone and switch from headset to speakers.

With the onboard noise cancellation, it does advise you to make sure the audio station is at least 70cm away from you, which isn’t the easiest to achieve given how thick and rigid the braided cables are.

The Sonic Studio software installed with the driver works very well too and allows for lots of tweaking for those that know what to fiddle with when it comes to an audio equalizer, plus various presets for those that don’t.

Surround sound headsets are a strange breed, you’ll never be able to accurately recreate a surround sound speaker system as all the speakers are in reality strapped to your ears and some distance behind you and around you. The ones that use software to create a pseudo surround sound make a reasonable attempt at it, such as the Logitech G933, but to get the full effect you need the real thing. Here the ROG Centurion with its 7.1 true surround sound provided by 10 discrete Neodymium magnet drivers really does the business.

Audio quality is one of the most subjective areas to discuss in a review, but to our ears we found the ROG Centurion to provide some of the best audio quality we have ever heard from a surround sound gaming headset. Coupled with the excellent noise cancellation you really do get a superb all-round audio experience. It’s not just gaming where it excels, but any audio such as TV, Movies and Music.

Compared to our Logitech G933, the Centurion did take some getting used to as it is a totally different audio experience, but one that is far superior. It really adds an extra layer of enjoyment to most games and comes into its own with the likes of Battlefield 1 for example. The rear channels are always the most difficult with a surround headset to fool your brain to think the sound is coming from behind you but in a lot of cases, where applicable, we really did feel like the sound was coming from behind us. With the audio quality side of things, we had no complaints at all. The Sonic Studio software combined with the audio station allows you to tweak the audio to suit your exact requirements, out of the box we did find the bass to be a little on the heavy side, but elsewhere it didn’t need a lot of tweaking. If you want to test how good your own surround sound headset is try a YouTube video called ‘Virtual Haircut’.

For £220, the ASUS ROG Centurion is the most expensive gaming headset you can buy. For that outlay, you would expect the best of the best and in most areas you really do get that. From the audio quality, build quality, to the comfort and the features it does perform superbly in all these areas.

It is a little heavy and bulky but the excellent design really negates that as it’s one of the most comfortable gaming headsets we’ve come across. It does have a few negatives though. The size may not be to everyone’s liking plus the cables are of such a high quality with a thick braid that it actually counts against the headset with a cable that ends up getting in the way most of the time.

As for value for money and alternatives, ASUS’s own Strix 7.1 is a bit of a kick in the teeth for the ROG Centurion. At £168 it offers a near identical specification to the Centurion with about the only differences being you lose the stand, slightly different headset design plus the DAC is not listed as the ESS type. For a saving of £52, this could be a viable alternative if you can’t push the boat out to the Centurion. True surround sound headsets are few and far between and ASUS appear to be the only players in the market, other than that you need to look at the virtual surround sound headsets of which there are many.

To sum up, we found the ASUS ROG Centurion to excel in almost every area. It is expensive, but then you do get what you pay for here. As such we have no issues at all in awarding this an AVForums Recommended badge.