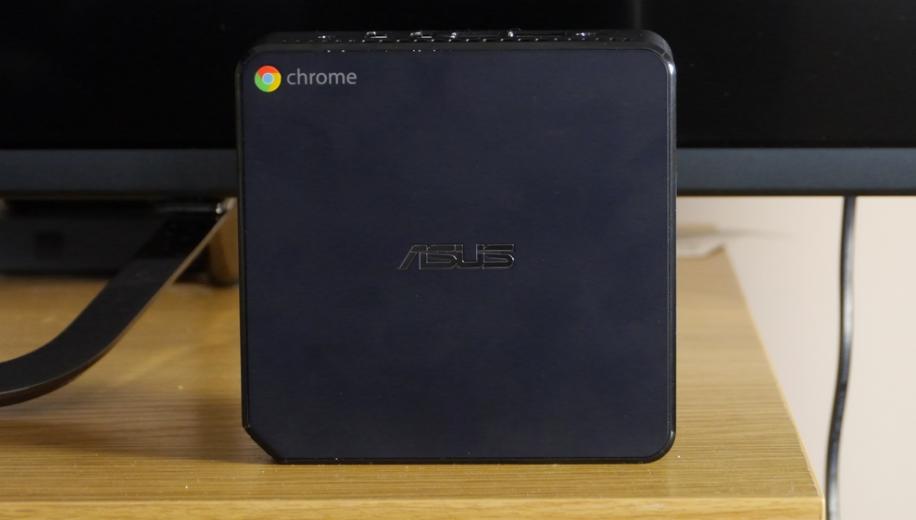 What is the ASUS ChromeBox?

Essentially the Chromebox is another small form factor PC running Google’s Chrome OS (Operating System). The idea behind Chrome OS is that it’s very light, free of viruses and fast to boot, with the Chrome browser sat at the very heart of things and a range of apps to enhance the experience. And why is AVForums reviewing such a thing? Well, the Chromebox has some unadvertised capabilities that make it a potentially superb little media hub and we’re keen to check them out after reviewing numerous little Android and Windows based devices.

The model we have here is the entry-level offering from ASUS featuring a 64-bit Intel Celeron 1.4GHz processor, 2GB of RAM, Intel HD graphics and, most interestingly, a 16GB SSD (Solid State Drive); an inbuilt SSD gives the promise of ultra-fast boot times and very quiet operation. The ASUS M060U is currently available (August 2015) at a cost of around £160.

The Chromebox is larger than your average small-form PC in terms of height but it’s still a wee little thing with dimensions of 32.8 x 21.4 x 6cm (DxWxH) and weighing in at 625 grams. Connectivity options are generous with four V3.0 USB ports, HDMI and DisplayPort video outputs, an SD card slot, a 3.5mm audio jack and a Gigabit LAN port. Wireless connectivity comes courtesy of dual band (2.4/5Ghz) Wi-Fi and a version 4 Bluetooth transmitter. It’s worth noting that the Chromebox doesn’t come with any means of control so you’ll have to provide your own. If you’re planning on using it as Google intended, that means you’ll need a keyboard and mouse combo but since we want it as a media hub, we used an airmouse with traditional remote control proportions. You can buy USB dongles with infra-red capability to pair it with the likes of a Harmony universal remote, should you wish.

I’ll admit I went in to this review knowing not much about Chrome OS (that's why I've kept is so long ASUS, honestly) but I’ve come out the other side far more impressed than I expected. In fact, other than a handful of specialist software packages I need, I could probably quite happily use it for my day-to-day computational needs. It is a very cloud-centric OS, of course, but you might be surprised at the number of web-based applications in existence and the breadth of options they provide; for instance, I could easily switch from all the Microsoft Office software I use to Google Docs and the limited amount of photo-editing I do could just as easily be done via PIXLR.

There’s a popular misconception that you need to be online permanently to use Chrome OS, at all, but that’s not really true with many apps allowing you to operate offline. It is incredibly quick to boot, supremely quick in operation and, if like me, the Chrome browser is at the centre of your internet world, the instant data synchronisation is just great. There is also the advantage that system updates are small and fast, you don’t need anti-virus software and installing apps is an exercise in simplicity, itself. BUT – and it’s a big one for us – it doesn’t really provide the unified home media experience we are after. Sure, you can run most key streaming services from the browser but the likes of Netflix, for instance, don’t run at the correct framerates and/or screen refresh frequencies. Things would be better if there were a larger selection of dedicated Chrome apps but, for now, if you want to run the Chromebox as a media centre you are better off installing another operating system on it…

…which brings us semi-neatly to the installation of OpenELEC. For those that don’t know, OpenELEC is a free and open source operating system which is almost solely dedicated to media centre duties. Based on KODI/XBMC, it is very small in size, boots up extremely quickly and has very low overheads on the processor, meaning it will run very quickly and smoothly. Our previous experiences of OpenELEC have been with Android boxes and the performance enhancements the ChromeBox provides are fairly marked over the majority of those.

The installation of OpenELEC on the ChromeBox is well documented online but, in summary, it’s a process that involves putting the Chromebox in to Recovery Mode. It’s then a case of enterring a couple of commands from a prompt which will download a script which will then guide you through the installation, in a reasonably user-friendly way. It’s not difficult but you do need to be careful so you don’t brick the thing. To get maximum performance also involves removing the rubber feet and opening up the case to reveal the write-protect screw; the removal of this means boot up time is reduced from around 30 seconds to something far speedier. So, when we say quick to load, just how rapid is the Chromebox to do so? Running OpenELEC 5.95.2, from a cold boot, using the default Confluence skin, it was ready to go in about three seconds – which is lightning-like! Once up and running, navigation through menus and installation of add-ons is also incredibly slick and, in short, it runs like a dream. Network speeds, both local and internet, are also excellent through the ASUS ChromeBox with transfer speeds, over SMB, of more 8MB/s over WiFi and more the 15MB/s over a wired connection; prior to switching from the ChromeOS we measured internet download at just under 100Mbp/s over both wired and wireless connections so whether you’re streaming locally or from the the web, you’re not going to struggle with anything.

On this platform, the ASUS Chromebox makes for an excellent media centre and even supports UltraHD resolutions at up to 60 frames per second, although that’s only through the DisplayPort connection as the HDMI port is only version 1.4a and, therefore, can only provide 2160p30. There is the limiting factor that H.265/HEVC decoding is done in software and the CPU can only handle 1080p so the majority of Ultra HD content that’s coming won’t be able to be delivered by the current hardware configuration. We threw all manner of video files at the ChromeBox and it was only our test 3D ISO that saw it fail so it’s just about as comprehensive a video media player as you could wish for with full support for all framerates, delivered automatically at the correct frequencies – provided your display supports them and you’ve clicked the appropriate setting in the Video Playback options menu.

Running OpenELEC, the ASUS M060U Chromebox is also able to both bitstream and pass-through 7.1 HD audio, which is something most media boxes can’t do. It’s slightly disappointing that the built-in Bluetooth doesn’t support audio devices but the fact we were able to pair up the Amazon Fire TV remote with it was compensation enough; it just gave the added feeling of interacting with a media device, rather than a mini-PC.

In terms of a device on which to run KODI, this is probably as good as it currently gets.
All, in all, it has to be said that the overall KODI experience could barely be better than through a ChromeBox, meaning you’d have to spend £XXXX’s on a PC to run it as smoothly and then you’d have the noise to deal with. What really sets it apart from even the best Android boxes – including those that can run OpenELEC, as well – is the solid state drive which ensures what Alan Partridge would term, ‘liquid’ performance. The major gripe was with the OS constantly ‘forgetting’ the wireless network, although you can’t really blame that on the hardware.

Should I buy the ASUS ChromeBox?

The above should really be a question in two parts: A) Should I buy a Chromebox as PC/Laptop/Mac replacement? And B) Should I buy the ChromeBox as a vehicle on which to run KODI/OpenELEC? On Question A, the jury is still out for us as there are just some things that ChromeBox can’t do -especially in terms of specialist software- that can be acheived on a Mac or PC. If your requirements are fairly basic, i.e. a spot of browsing, streaming some video, emails and even simple ‘office’ software based tasks then it’s a really good choice with a fast-booting, slick-running and virus-free experience awaiting you.

In answer to Question B, it’s a huge affirmative if your budget will stretch. The ASUS ChromeBox has all the connectivity you could want, the hardware – especially the SSD drive – ensures it runs OpenELEC with unbelievable slickness and support for media file types is incredibly comprehensive with it playing just about everything bar 3D ISO. As a media hub, the ChromeBox is close to being peerless and for something costing around £160, that’s not a bad achievement! Highly Recommended.

Hmm, well the closest match we can think of is the Minix Neo X8H-Plus which, as far as we are concerned, is the best Android TV Box out there and can be picked up for around £50 less than the ChromeBox. It too has an excellent working version of OpenELEC 5.95.3 but it’s not as slick and fast as the ChromeBox at running it. Alternatively the OpenELEC version of the Wetek Play is a decent offering and is about half the sum of the ASUS although, as you would expect, it can’t hold a candle to either in terms of processing and speed. For those that like a bit of Windows in their life, the Minix Z64 is also top-notch and for a more general look at the market have a look here.