Game and watch takes on a new meaning. 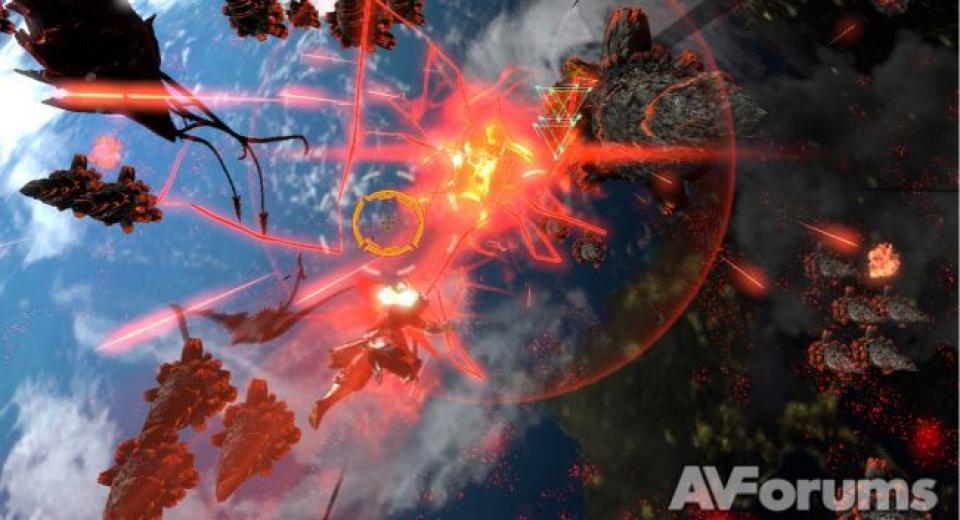 Coming to these shores with the hefty weight of a nigh-on perfect score from the veritable Japanese gaming journalism institution that is Famitsu (two ten-out-of-tens and a couple of nines), Asura's Wrath appears, on the face of it, to be exactly the kind of Eastern title Western tastes have become accustomed to in recent years. Give the trailer a brief glance and you'll see the usual ingredients: strong zany characters, third person combat and a healthy dose of “I wonder what's going on”. Aesthetically flashy, with a distinctive style, the large-scale battles might lull the unsuspecting gamer into a false sense of familiarity with what will unfold. The assumption would be: carve your way through the small enemies, make your way to a boss, learn moves along the way, rinse and repeat until the closing credits.

Well you'd be half right. The game comes as a collaboration between Capcom, who need no introduction, and CyberConnect2, a studio largely known for their work on the .hack and Naruto tie-in series. The pedigree is there for a knock out title of brawling excellence, but load up the disc in ignorance of what this game really is and you could walk away feeling short-changed or, as some have discovered, wonderfully surprised. In simple terms, Asura's Wrath is an interactive anime series. You'd be forgiven for assuming the art style was little more than a correlation to its Eastern roots, but it is in fact an interlinked part of what was created; even if not wholly specifically to fall into the aforementioned quasi-categorisation, the design choices certainly bear out the fact that this was largely the direction of those behind its production. Pop on the optional (excellent) Japanese audio and the scene is well and truly set. I dare say, most titles you'll play will have a gameplay to cut-scene ratio of 10/1, perhaps less, but even the most FMV heavy offenders, Kojima et al, rarely push cinematics above the core act of playing to evolve the story.

If you've missed the discussion, with some Western journos questioning the quality of the game due to the unique way it's presented, then the first indication that you may be in for a different experience will likely come as you think “my God, this opening sequence is dragging on a bit”. The initial intro doesn't even seek to acclimatise you to the basic controls, pushing a space shooting section towards you with a few quick-time-events for good measure. Its prime purpose was to move the story along, and introduce you to the characters, and this balancing act, skewed heavily in favour of the narrative, doesn't redress itself for the brief time it takes you to complete your first playthrough.

Atmosphere is king, all other elements are peripheral; not necessarily inconsequential, just secondary. The graphics and audio are generally of a high standard, with the former immensely pleasing and portraying the action well, but falling foul of a few instances of V-Sync tear, aliasing, slowdown and banding hindering it from being truly top drawer, whilst the latter is pretty simplistic but at least has a stand-out Japanese voice track, perfect for the oh so many times the protagonist screams “aaaaaaarrrrrrggggggg”. The narrative is suitably inventive, and one that encompasses many unique ideas, playing with a few myths and legends. You are Asura, one of the Eight Guardian Generals in what will become known as the war of creation, the world is plagued by Gohma, a sort of infected race of differing species that can range from monkeys, with what looks like Ragu all over them, to beings the size of continents, capable of burrowing through entire planets. I have no wish to spoil the story for anyone, as that's a pivotal feature, but it isn't giving too much away to say you are betrayed and must fight for vengeance against the Gods.

It's a captivating mix of sci-fi and mythology, playing on aspects of the Hindu faith, in a vaguely reminiscent way to the manner in which Too Human moulded the Norse legends into a gleaming mechanical world of deities and robotic beasts. Everything is about scale, and epic doesn't do the game's sense of largeness justice. For heavenly creatures, Asura and pals aren't simply capable of superhuman feats, they take the world as we know it, physics and all, and throw them into a Bizarro universe that would have Superman cowering for both his life and his sanity. There are no rules to what you witness, and as such the grand scenes of combat can happily bounce between the earth (or Gaea as it's called) and the moon. Bodies plummet through space like flesh coloured meteorites, enemies grow to the size of planets and all-in-all it has moments that make God of War III look like a scuffle in Trumpton.

Once you're in the heat of battle it's a very simple system of attack, heavy attack, evade and jump at its core. There’s a cool down needed between heavy attacks, and you can also fire projectiles from range in either a rapid fire or a multiple target lock mode, the latter increasing the damage with the more targets acquired at the time of firing.  This use of ranged weaponry is not where the game's assets lie, but it does allow for the introduction of some good on-rails shooter sections.  You'll dodge and strike, whittling down the lesser enemies, helped by an Unlimited gauge - the standard powered up state that seems to exist in many third person combat titles these days – which is filled by either inflicting or receiving damage, and negates the need to cool down between heavy attacks. The tactics used to take out the small fry won't work for the bigger enemies though, the Burst gauge is required. This is a meter filled solely by inflicting damage, and its deployment is your only means of advancement. It is not an option, a flashy trick to show off how killer your moves are, brought out to help unlock an S rating or such. It is the trigger to progress to the next stage, once unleashed you'll be greeted with a few astoundingly over-the-top cinematic sequences showing you dispatching the enemy facing you, via absurdist methods, and so long as you hit the quick-time-events that go with the movie, which are so forgiving in their loose timing constraints as to make them almost unmissable, you'll have completed your task and be standing over the body of some leviathan or God, ready to find your next foe.

The structure of the game (we'll call it that for now, arguments later) is like a giant conveyor belt, quite literally!  It shifts a multitude of behemoths into view for you to dodge the attacks of, pound merrily, and finally slap R2 to finish them off with your Burst gauge. The bosses don't need to be those of the central story, your character's desire to get revenge is routinely punctuated by a lumbering Gohma beast looming into view having crashed through a wall, its inclusion is there to fill out the proper, narrative based boss fights and to elongate, minimally, the times between cut-scenes. If you view this as a combat title solely, the smaller enemies will quickly become a distraction, trifling and in the way of the real meat of the huge opponents to be faced.

So, with a short campaign, easy QTEs, questionable variety in enemies faced and no great effort to implement a unique combo or style systems, this is a bit of a duffer of a game, correct? No. There is some replay value to be found in the extra gauges you can unlock, but how much you come to admire Asura's Wrath depends on where you view it in the spectrum of media. As a game, something almost predominantly relying on gameplay, the intricacies of their mechanics, flow and the satisfaction you get from the correct input of buttons, it's arguably suspect. As a hybrid of anime and videogame, passive and interactive, it is a joyous feat. The universe created is interesting, full of ideas, its approach to religiosity sitting well alongside another recent Japanese third person combat game El Shaddai: Ascension of the Metatron. It has a sci-fi edge, mechanical arms are torn from torsos in the heat of battle, fleets of golden warships fill the sky overhead. Yet it finds a malleability in the religious symbolism to play with it all, turning lotus flowers into vessels, toying with idols and icons: Commander Deus, a war of creation, a divine weapon called the Brahmastra and so on.

It helps massively if you buy wholesale into this type of anime, the roots of the material shine through, following the classic template of a warrior yet to find his hidden powers. Even within what might seem the strict confines of a sub-genre, Asura's Wrath finds room to sidestep in its approach, the times you are sent to the underworld are almost karmic and cyclical, arguably bumps in the pacing, but undeniably interesting in their execution.

Brevity is an issue, but a reported five rounds of downloadable content are on the way and if you consider what a good (even short) anime series costs, and how often you might view it, then this by no means has “only worth a rent” indelibly stamped upon it. The market is probably small for Asura's Wrath, but the sheer quality and value is in there, even if some of the design choices seem to go against reason, scratch the surface and you'll be rewarded.

Asura's Wrath is perhaps best described as a series, neither game nor anime. It has episodes, a clear story arc reliant on user input during movie sequences, and the replay factor is wholly dependant on how much emphasis you put on atmosphere and narrative in your favourite media, whatever they may be. It's a title that can't be assessed in a simple fashion, if you love the stylistic animated roots, get enveloped by the story, you'll likely want to repeat the episodes straight away, either to get more combat time or to witness the cut-scenes all over again.

If you want straightforward brawling thrills, boss battles to truly test your split second reactions, weapons and combos galore then look elsewhere. CyberConnect2 and Capcom have fashioned a thing of beauty, a punchy, aesthetically bold feast for the eyes, a glorious stained glass window of a title, that you can peer at to find cracks in the lead or stand back and bask in its warm glow. Either way, it proves captivating, a multimedia amalgam the likes of which you'll rarely, if ever, see.