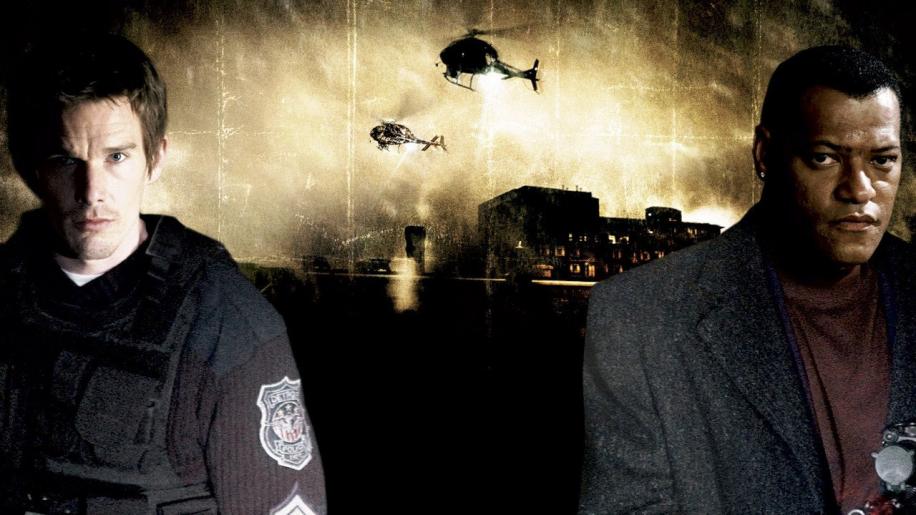 It's New Year's Eve and Detroit's Precinct 13 is about to close its doors for the last time. The skeleton staff - Sergeant Jake Roenick (Ethan Hawke), secretary Iris Ferry (Drea de Matteo), and patrolman Jasper O' Shea (Brian Dennehey) are expecting a quiet night. However, a prison bus containing a crime lord, Marion Bishop (Laurence Fishburne), is diverted to the station due to a blizzard. A gang of bad guys want Bishop dead and will stop at nothing to achieve this. The Precinct is suddenly under siege. Devoid of outside help, electricity, telephones, and vital supplies both cops and criminals must band together to survive.

Remade from a 1976 John Carpenter flick, Assault on Precinct 13 is a perfunctory action picture. There's the addition of stars and extra firepower, and it's nice to see some R-rated nastiness in a mainstream American thriller, but it's still yet another pointless remake. Director Jean-Francois Richet gives us a few enjoyable bursts of fast action with hi-tech machine guns blasting away, but during the lulls everything judders to a halt with tension substituted for trite dialogue and expository waffle. The plot is wafer thin so the banal dialogue scenes really weigh the whole thing down unnecessarily, especially with repetitive Tarantino style posturing and of course, the tough talking cop and the crime lord have a score to settle with each other, but it's on hold for now.

The poor rhythm of the film gives the audience a chance to think about the myriad of plot holes and implausibility - which you wouldn't normally if it was more ominous in the quiet bits or if they were shorter. The bad guys are supposed to be highly trained (very highly trained) and are equipped with the most modern assault weapons and equipment money can buy, yet I find it hard to believe that they couldn't have breached that old building and wiped out the few cops and criminal guttersnipes in five minutes flat. Instead they bumble along falling over each other getting shot like ducks in a shooting gallery. Who trained them - the Chuckle Brothers? They also do strange things like use laser sights with the red beams to shoot out the windows (and look cool) but then don't use them for the rest of the film. How odd. The plot twists are anything but twisty, the continuity suspect (the sun rises very fast in these parts), and the acting is often rather patchy with poor chemistry. The main leads are adequate - Laurence Fishburne exudes his usual quiet cool, Ethan Hawke is okay as the hot headed cop, and Brian Dennehy is solid in a journeyman fashion playing an old cop on the verge of retiring. Gabriel Byrne underplays and is woefully underused. One thing I noticed which irritated me to be honest is that Hawke is rather scruffy for a uniformed policeman. Okay he's supposed to be a borderline alchoholic (hey, character development!) but why does he have to have designer stubble? It's not just a couple of days growth either, it's practically a goatee, as the sides of his cheeks are shaved clean. He might be a 'Jack Daniels for breakfast, sleep in your clothes, and stumble in to work late' type of burnout, but he's still vain enough to do some stubble sculpting! As for the rest - they're just very annoying, Ja Rule and John Lequizamo in particular. They play petty criminals who of course know how to handle assault rifles as if they were Navy SEALS. Similarly, a female shoplifter picks up a 1930s Tommy gun that was conveniently left in a cupboard and blazes away with it as if she was Al Capone's enforcer. Ach, the more I think about it the more annoyed I get.