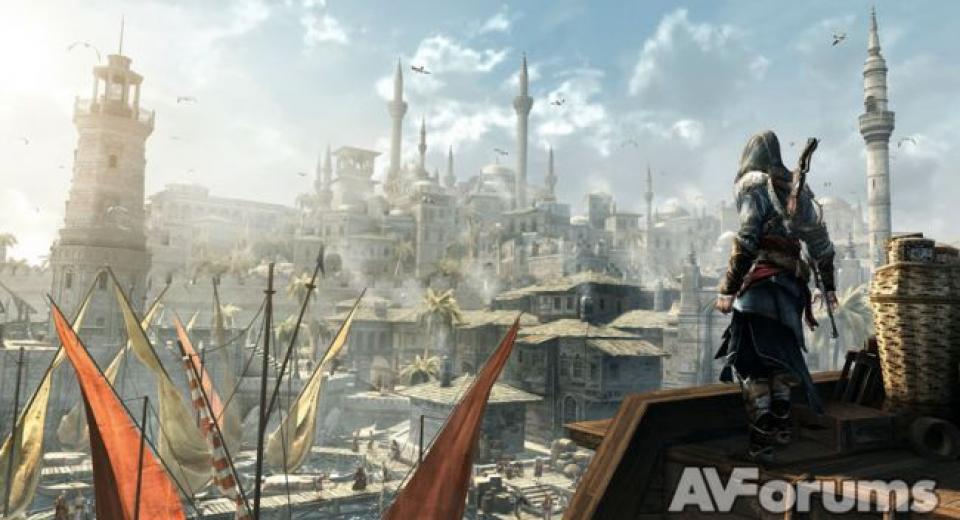 It’s been quite a success story for Ubisoft since the release of 2007’s Assassin’s Creed.  The franchise, which tied in nicely to the twin zeitgeists of parkour (freerunning) and Dan Brown-esque biblical conspiracy theories, not only baited the hooks well by incorporating current trends but offered a suitably mature experience once it had your attention.  The original may not have been, well, that original, with bloodthirsty stealth titles such as Tenchu having laid the framework for sneak assassination tense gameplay, but it pulled together enough stellar elements to overshadow any roughness around its edges.  A sprawling city to explore, with buildings to scale at will appealed to those with a taste for free-roaming, whilst the core crux of sneak-and-kill in a bustlingly populated environment with seemingly countless variables was gaming catnip to stealth fans.
With each iteration the series has taken these fundamentals, refined them and added more bells-and-whistles, the peak arguably coming with last year’s Assassin’s Creed: Brotherhood.  Switching protagonists and locations was simple in a narrative that encompassed a global plot of secret societies, but this year’s addition, on the face of it, would seem yet another slam dunk of a hit on Ubisoft’s hands.  Just give your fanbase more of the same, and surely they’ll go wild for it…won’t they? Well, yes and no.  With every media franchise there reaches a point where the scales of artistry and profitability start to teeter, and some may start to get the whiff that Revelations is just that.  Seemingly now on a course to release an Assassin’s Creed title every year, the reports of the director stating there would be no such game in 2011, only for the CEO of the company to state there would be may not ring alarm bells, but there was no doubt enough chiming in ears to suspect tinnitus.
The protagonist from II and Brotherhood, Ezio Auditore, is back once again, the old adage of never outstaying your welcome may be heeded as it has been announced that this is his last outing as the lead.  The TV ad campaign showing the flashy battle sequence is our intro, as he sets foot in Constantinople.  The setting may change once again, but what is a little harder to get to grips with is the overall tone, set by these early moments in the city.  For a secret guild of assassins, sworn to walk in the shadows to protect the world, you are greeted by your new guide like an overeager aunt welcoming her favourite nephew at King’s Cross station.  You may be told this is not a true Templar stronghold, but the air of low-key is dented by this pronounced hello.
Your guide, Yusuf Tazim – head of the local order of assassins, explains the political topography, whilst the gamer in these early moments is given a bite-sized history lesson.  In a way it’s a shame we have to leave Rome and the Holy Land as the imagery is much more recognisable, I’ll be honest if I saw an Ottoman guard pass me by I would assume he was dressed as a Teenage Mutant Ninja Turtle and was late for Halloween.  Still, the Islamic architecture is reminiscent of the first game, with minarets punctuating the horizon in every direction.  And it’s a horizon that, though the game engine may be getting on a bit, still looks fantastic draped in Mediterranean sunshine, the lighting is as warm and subtle as ever – a few shadows display the old zig-zags, but you can’t have everything. Onto the new additions, and there are a few.  Your hidden blade is broken, and your new best pal Yusuf furnishes you with a piece of Turkish engineering, the hook blade.  With it you can slide along zip lines that connect buildings (thereby cutting navigational time down and giving more chances for aerial assassinations), reach slightly higher and hurdle enemies.  Oh, and kill people as before.  It’s not the most radical tool, most uses could have been added without its inclusion, but aspects such as the additional reach do offer some extra routes when on high, as you can now perform a straight long jump onto and off of a lantern rather than having to follow its general centrifugal path.
The next toys to play with are bombs.  Now these have the potential to split fans as their implementation has certain ramifications for how you approach certain tasks.  There are a reported 300 variations to be manufactured from the variety of bomb making materials (fuses, shells and gunpowders), but beyond radius and potency tinkering most will hit upon a few formulas to keep, one in each category of lethal, tactical and diversion bombs, kept in their own distinct pouches.  If you want to attract a crowd, why not throw one that’ll disperse lamb’s blood or gold, thereby drawing attention to a spot?  Feel like taking out a huddle of guards, then just lob a particularly lethal shrapnel offering in their midst.
The theory behind the bombs is sound, everyone wants a new title to come with new weapons, but in giving you yet another distance based tool the risk of reliance becomes greater.  They can almost be seen as a go-to weapon, fine for those eager to clear an area, but there’s a real argument that the addictiveness, and the purest gameplay in the Assassin’s Creed games came from painstaking planning; clear a vantage point of guards, survey the scene, pinpoint your prey, and then begin to plan a path that will hinge upon timing, swiftness of striking and a well laced escape route.  The missions still bring a sense of satisfaction with them, even if you focus your energies on bombs (which, with careful distraction can lead to the great feeling of only having to take out your one intended target), but now they’re an option some areas have larger amounts of guards on patrol, making their use or outright combat far more likely. Another new feature is the Den Defence, a mini strategy game in the style of most “defence” games.  Once you have taken a Templar tower by killing the Captain and lighting the beacon, as before, it can be attacked once again by the Templars.  You must place your troops in strategic positions so they may repel the waves of attacks.  With each enemy defeated you earn more to be spent on reinforcements.  It’s pedestrian, and the viewpoint sometimes doesn’t help, but it’s not something to truly love or hate.  The only annoying aspect being that if you don’t care for it there’s little point taking the towers, due to the Templar awareness meter that can fill pretty quickly and triggers their attack, so if you forego that you obviously have to let some of those pesky Captains live.
These are all baubles tacked onto an already solid game, which doesn’t need changing greatly.  The thrill of the hunt is still there, the story – looking for yet another artifact and hidden keys – is getting tired and probably the worst of the series, but the act of chasing down a target through busy streets, launching at the key moment to strike from above, or poisoning a man surrounded by a crowd, only to slip away before he even hits the floor, remains reassuringly addictive, no matter how perturbed you may be by the trinkets bolted on by what appears to be a dev team eager to justify another full priced title that’s technically a side-step in the series (though they can obviously be forgiven for not foreseeing how profitable a franchise this would prove when they aimed for a mere trilogy).
The multiplayer takes another swipe at the second-hand games market by way of the “Uplay” passport again, which comes with new games or can be purchased via PSN/XBL.   Modes include Deathmatch, Assassinate, Manhunt, Wanted, Chess Capture, Corruption, Artificial Assault and good old Training Ground.  Deathmatch will likely be a staple for those who want to elongate their stay in the Assassin’s Creed universe once the story has been completed, the twist of eradicating the reliance on a compass to navigate towards a target spices things up.  Tire of that and capture the flag will keep you going for a bit of parkour fun.  In terms of longevity of the main game, it really depends on the amount the individual wants to invest, the quasi empire management of buying shops, finding loot and the like can distract for hours, nay days, but if you choose only to plough through the story in a linear order you’ll probably be looking at anywhere between 15-20 hours depending on planning time and your own focus on stealth. Assassin’s Creed: Revelations takes another side-step in the series, and with it, for the first time, adds elements that somewhat distract or even undermine the carefully laid atmosphere and organic gameworld.  It may seem churlish to highlight the mediocre rather than the good, but it is also a sign of just how far the series has risen.  The original was a rough diamond, the formula has been honed, it has been refined, but Revelations just tries that little bit too hard to justify its existence through needless additions, something that, set against a backdrop of a less than gripping story, Ubisoft probably felt entirely necessary.  The plus points of Brotherhood are all still there, and this is definitely the game of choice if you crave a stealth fix for Christmas, but all that polishing has somehow managed to rub a bit of shine off the veneer.

In a series that has had a steady upward trajectory, Revelations proves to be the first title that is weaker than its predecessor.  Everything you ever loved about the Assassin’s Creed games is here - stealth, a bustling gameworld and copious Templars to dispatch - but so are additions that struggle to be integrated properly.  The story is probably the least thrilling thus far, which would harm any narrative driven title - it doesn't lack a pay-off, but it takes time to get going and feels somewhat forced and disjointed.  However, the strength of the core gameplay holds everything together, it’s just not as easy to look past the distractions, or choose not to partake in them, as it was in previous instalments.  Thankfully free-running across stunning rooftop vistas and the nitty-gritty of sneak-and-kill can still be played largely in the same manner as always.