As Tears Go By Movie Review 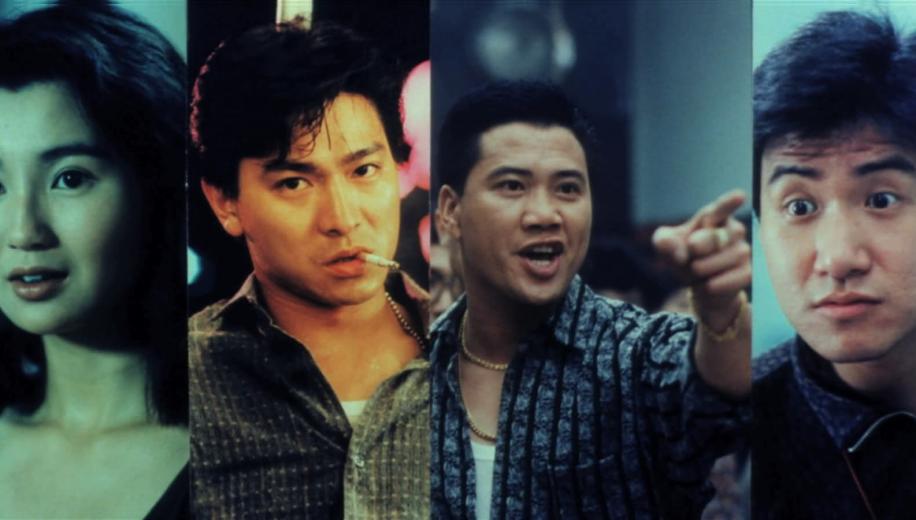 It is always interesting to delve into a director's back catalogue in order to see the marked progression that has formed artistically throughout their career. It is doubly satisfying when such a director has since proved themselves to be one of the luminaries of world cinema since their early humble beginnings. Such is the situation I find myself in when tasked with viewing the debut of one Wong Kar Wai - a name no doubt familiar to many who possess even a passing curiosity of non English language films. He has recently carved out a niche for himself, with heartfelt tales of love and the many pitfalls associated with it, in such titles as In The Mood For Love (2000) and 2046 (2004). Both the aforementioned stories starred Tony Leung in the leading role, who is perhaps best known now in the West for his performance in Ang Lee's latest award grabber, Lust Caution. However, Wai's debut had another of the now figureheads of Hong Kong cinema inhabiting the mantle of key protagonist - Andy Lau. Both are truly fine actors, but offer differing strengths to their roles. Leung has the everyman appeal - capable of understated torment and nuanced pathos, whereas Lau has always shone to the greater degree when an element of violence has entered the mix. He seems at once able to maintain a simplified persona and yet also hint at an edge that lurks. This collision of Asian superstars and acting styles against the backdrop of a Hong Kong crime drama made for a veritable smash when the Infernal Affairs trilogy (directed by Wai-Keung Lau and Siu Fai Mak) hit the screen, but how does Wong Kar Wai's early work fare with the still developing talent of just one, coupled with a genre that arguably doesn't fit his now established oeuvre.

For such an artistically established and thoughtful director, it may come as some surprise that As Tears Go By is entirely unoriginal in its basic story. Essentially being an Eastern reworking of Martin Scorsese's 1973 classic Mean Streets. Like its Western brethren, it is a story of love and crime. The central character, Wah (Lau) is a Hong Kong criminal embroiled in organised crime. His life is wrenched one way and then another by the ever decreasing circles his friend and “little brother” (not in the sense of familial relationships, but rather a term used to refer to lower members of a particular gang in the criminal fraternity) Fly seems to entangle him in. Whilst Fly desperately tries to clean up the wake left by his reckless pal, the mix becomes even more muddied when his cousin comes to stay. Played by Maggie Cheung, an actress who would go on to star in many Wong Kar Wai films of the future as well as such high profile releases as Hero (2002), the role of this distant relative, Ngor, is key to all that further unfolds. Once Wah starts to develop romantic feelings for Ngor, the stage is set and the triangle has been completed. Like Scorsese's piece, the tension that slowly builds is based upon the protagonist's inability to meet the needs of all those around him. Whether he truly cares for them (as with Ngor) or simply feels duty bound to attempt to deny them the chance of self destruction (arguably the case with Fly), he continues to divide himself in a manner that can only lead to a conclusion that will surely fail one of them. He is juggling too many lives and sooner or later one shall have to fall.

The problem with As tears Go By from a Western perspective is that the comparison to an already established classic is always likely to see it appearing the weaker sibling. There have been many films that have drawn inspiration, or even downright copied plots from their equals half way around the world. This has been both West to East, as is the case here, as well as the opposite, most notably seen perhaps with Ringo Lam's Chow Yun Fat crime thriller City On Fire later becoming the spark that developed into the backbone of Quentin Tarantino's Reservoir Dogs. In that instance both offer enough to stand as great offerings in their own right, simply because of the stark differences between them and the styles in which they were made. Here, the story deviates just enough to push lingering thoughts of Mean Streets to the back of one's mind for long periods, but they remain there, dormant. Lau is more than capable of filling any role Keitel has donned as he is imbued with a lackadaisical charisma that burns slowly yet brightly. He is both adept at conveying the drive and ambition of a man on a mission as well as the subtly balanced emotions of romance that creep within his persona, gently pervading his sinful lifestyle. Much of this chemistry, though it is primarily Lau as the focus, must be attributed to the ever graceful acting of Maggie Cheung. Even in this early role, she shows us enough to convince the viewer of her talents. A secondary figure for much of the story, minor looks and miniscule turns of the head create the presence of a figure that is slowly drawing Wah away from the world he has been enmeshed within, through her own gentle coming forward and retreat. This is where Wong Kar Wai's direction is of paramount importance. The love story unfolds like a nuanced dance - each being both pursued and pursuer, both giving and taking ground on the landscape of their potential relationship - best immortalised by Ngor's delaying and uncertainty of whether to go to Wah's room. The camera waits for her to make up her mind and the shot is drawn out and protracted beyond what is strictly necessary, highlighting the thought process and ponderance of the young woman's decision. It is still clearly a rough diamond, as the interminably cheesy use of 80's power-ballad “Take My Breath Away” sung in Chinese proves, however the seeds of what would later become Wai's signature of deep, heart felt emotional turmoil are apparent if one cares to look hard enough. The romance isn't fast or impacting, rather smoulders and gently infuses through the character's changing personalities.


The problem with the film, if one cares to pick, is that it is neither one thing nor the other. It is set against a backdrop of Hong Kong gangsters and clearly was intended to be part of the steady flow that emanated from the province and made a profound profit, never truly dependant upon quality. Like the numerous lo-fi crime flicks that followed in the wake of Tarantino's Reservoir Dogs, sometimes association by way of artistic intent is enough to gain a modicum of success or at the very least profitability. The presence of Wong Kar Wai at the helm only serves to push the love angle of the plot to the fore at key points. However well these moments are committed to celluloid, the vast majority of our time is still spent in the seedier world of violence. For his part, Wai manages to inject a healthy dose of tension to these scenes, but they aren't likely to displace the all out carnage of carefully orchestrated visceral beatings of Woo and Lam. As such, this remains a fairly uneven piece - something which isn't aided by the lack of depth given to the friendship between Wah and Fly. In Mean Streets, the connection between the two leads was one of salvation, key to this was their friendship and more importantly the Christian visions of the protector figure. This being an Eastern film, the element of religiosity is strangely absent. One would expect, as with many Hong Kong crime pieces of the era, a degree of Buddhism to be suffused throughout. This is never realised here, instead the general attitude of transcendentalism is only arguably present in the manner in which Wah seems unafraid of death.

As Tears Go By is very much a title within several realms - sitting astride boundaries. It is a crime drama at heart, albeit with the added bonus of a tender love story. The hard edge is never far away from the burgeoning relationship and this serves to both heighten it and in many ways detract from it simply because of the inevitable imbalance. The running time hints at a product designed to appeal to as many viewers of the then craze of Hong Kong gangster films as possible. Wong Kar Wai emerges momentarily in places to show an artistic flourish, with interesting framing and lingering shots, but understandably as a first time director isn't pushing his style into every frame. As such, people will either applaud this as a strong crime drama or decry it for the lack of presence from a man who would become an acclaimed director. Whichever way, there is enough of interest to keep any fan of Asian cinema glued to their seat for the duration. A flawed piece, but one that shows enough moments of good acting and direction from future greats to be recommendable, just don't expect vintage Wai romance or triad action to rival Lam or Woo and enjoy the cinematic mixture as a rough diamond.