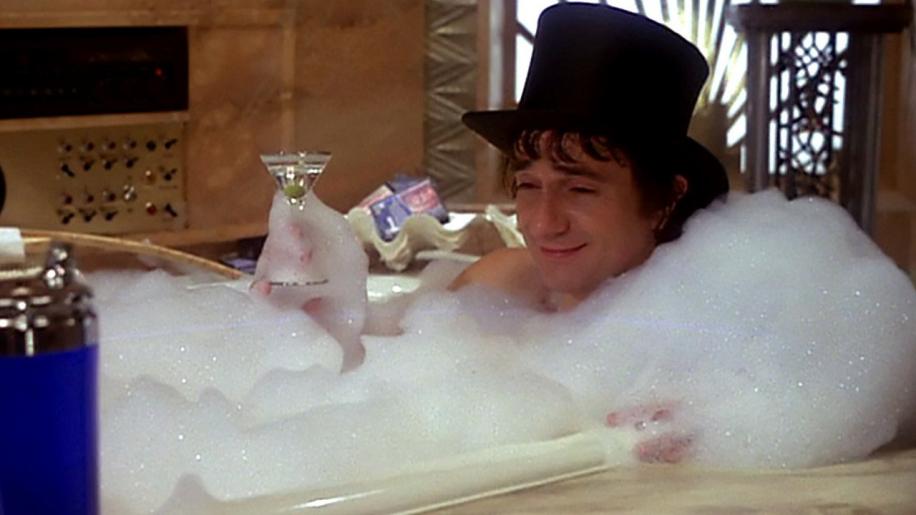 Russell Brand comedies are certainly an acquired taste. Personally, despite his extravagant, over-the-top personality, I find the stand-up comic, celebrity host and sometimes film star eminently engaging, and – occasionally – downright hilarious; offering up a refreshing brand of biting but honest humour, which only suffers under the weight of some of his more extreme, grandstanding, attention-seeking behaviour. Perfectly cast as the insanely arrogant rock star Aldous Snow in 2008’s Forgetting Sarah Marshall, last year saw his first lead vehicle, the spin-off to Sarah Marshall, entitled Get Him to the Greek. With room to breathe, and a character to develop, Greek Him to the Greek became the second most successful rock-and-roll comedy (following School of Rock) in film history. And it was a pretty damn funny film too, playing to Brand’s strong points, whilst also attempting to tap into the depth behind his vacuous, often abrasive celebrity image.

His latest vehicle is Arthur – the 2011 remake of the ‘classic’ 80s Dudley Moore vehicle by the same name – and, whilst I’m not normally a big fan of remakes, I have to say that I’ve never been particularly fond of anything starring Dudley Moore (perhaps it’s a generational thing?), so there will be no love lost if the remake turns out to be a winner.

The story follows the titular character of Arthur, a rich-kid playboy who drinks far too much, is totally irresponsible with his money, and embarrasses basically anybody who knows him – not least his own mother, who is concerned about the future of her family business because of his silly antics, the latest of which involves a police chase with Arthur trying to escape in a Batmobile. To this end, she makes a deal with Arthur that he has to marry the business manager of the firm, Susan, otherwise she will cut off his allowance. Unfortunately, Arthur just doesn’t like her – she’s a shrewd, conniving viper of a woman; and her dad looks like he a) will quite happily kill Arthur with his bare hands and b) has some sneaky plan to insinuate his daughter into the business so that he can steal it. Who knows? Besides, Arthur – despite being somewhat irresponsible in his flings – has somehow met the girl of his dreams: a simple tour guide working, without a licence, in Grand Central station. Compelled to propose to Susan, Arthur still decides to court the girl at the station, Naomi, and, as you might expect, they hit it off. Expected complications ensue.

Arthur is a warm, thematically positive romantic comedy, hampered by a cast of normally reasonably interesting actors who simply haven’t been given room to breathe. It also follows a tried-and-tested narrative structure, but attempts to throw in curve-balls along the way, many of which don’t even come close to hitting the mark – and often threaten to derail the proceedings entirely. It’s happy, fuzzy depiction of rampant alcoholism is juxtaposed with an afterthought of sincerity which just paints mixed-messages for audiences. “Are we supposed to be taking this seriously? But I wasn’t even laughing all that hard in the first place” is largely the way I felt throughout.

And unfortunately – somewhat unexpectedly too – this 2011 remake vehicle for Russell Brand is also a little bit too tame for its own good in terms of his performance, reining in his normally outrageous contributions, and attempting to push him through as a genuinely good romantic comedy lead. The trouble is, we don’t need any more by-the-numbers romcoms and we don’t need Brand to be this restricted. Much like Jack Black – whose inspirational early-era cameos (High Fidelity) were cemented by an effective breakthrough solo vehicle (School of Rock), which merely led to an ill-advised, semi-serious role (King Kong), a single outstanding, wacky outing (Nacho Libre), a decent supporting part (Tropic Thunder), and then a succession of increasingly weak, lacklustre and, ultimately, extremely tame comedies (Year One, Gulliver’s Travels) – Brand went from an excellent supporting role in the otherwise alright comedy Forgetting Sarah Marshall, to a superb starring role in the often hilarious Get Him to the Greek, (via a cameo in Adam Sandler’s weak Bedtime Stories) and then he basically decided to become Dudley Moore for the purposes of this fairly lacklustre, perhaps quite pointless remake (and I haven’t even seen the original!).

The 2011 Arthur, as a character, is basically just your regular Russell Brand, only acting like he’s taken some heavy-duty painkillers. He is not allowed to swear, and not allowed to do anything too outrageous. He slurs his speech, sure, but he’s not a particularly interesting drunk, nor a convincing one – are there any genuine consequences to his drunken actions? The channel-hopping snippets of the original Dudley Moore performance that I can recall would lead me to believe that this is just Brand doing exactly the same thing – playing a really, really, really nice alcoholic. Yes, he is irresponsible with his money – but often with magnanimous gestures towards the general public – and, yes, he does speed around in his Batmobile, whilst drunk, but at least he is not the one driving. And when you see that he has to deal with an estranged business-like mother, and a psychotic bride-to-be, you wonder how Brand ended up playing the least extreme character in this film. Because he is so much more interesting as an outrageous playboy.

The film is brimming with big names as well, but, despite their best efforts, they too don’t manage to truly bring this romcom to life. Helen Mirren far from phones-in her performance here, even if she is capable of much more than just this. Following on from her great little part in the amusing OAP-actioner, Red, she really does her absolute best to make the film more interesting – but it surely would have been significantly better if she was having to contend with the real Brand, rather than just man-child Brand. Jennifer Garner, who has never really broken through into movie stardom (after the enjoyably frivolous Alias), is cast against type, and I’m really not sure it works (it didn’t work last time, either, in Juno). Would anybody really put up this much of a struggle when faced with the chance to marry her? Even if she’s trying her best to be ruthless and mean, if Jennifer Garner turns up at your house in nothing but sexy lingerie, and it’s a choice between sleeping with her – and marrying her – or losing billions, is it really that hard a decision? Perhaps either a) a slightly less attractive actress or b) a much more extreme performance would have saved this role, which just doesn’t sit well either. Nick Nolte (48 Hours, The Thin Red Line) has a single good moment – when he appears on-screen, riddled with nails from a nail-gun, but seemingly oblivious to pain; but it’s all downhill from there. And Luis Guzman (Carlito’s Way, Out of Sight) is woefully underused. About the only person who endures is Greta Gerwig, who is absolutely adorable as the woman Arthur actually falls for.

Sure, R-Rated comedies (often 18-certificate in the UK), inherently, don’t have the same wide-audience capabilities as PG-13 (i.e. 12A) flicks; but that doesn’t mean they can’t be successful – look at Knocked Up, Superbad, The Hangover and, most recently, Bridesmaids. And, more often than not, they actually turn out to be considerably funnier. This Arthur remake has a good heart; good intentions, and attempts to be a warm, and touching romantic comedy, but it just forgets to ever be laugh-out-loud funny. It has moments where you may afford yourself a smile, and a few nice ideas which seem occasionally out of place (Mirren’s character role gets far too serious, and the poignancy is squandered by one twist too many, and Arthur’s stoned demeanour) and, ultimately, it suffers because it’s weak, insipid and far too restrained; remaining tonally off-kilter throughout. It’s far from a bad film – it’s just too goodie-goodie for its own good.

Those who prefer Russell Brand to be more restrained – who don’t actually like his outrageous performance in Get Him to the Greek – and want a much warmer, more loveable, and likeable, role for him (even if Greek had some surprisingly honest moments), might actually like Arthur. This kind of career direction worked reasonably well for the previously hilarious angry-man-routine of Adam Sandler, who toned it down for The Wedding Singer; but I, personally, find Arthur draws closer comparison to Sandler’s earlier debut, the weak Billy Madison. And for Brand, I think it was too early to tone it down. He is still a charismatic lead, who does arguably deserve to headline his own projects like this, but his performances work better unleashed and unrestrained. Arthur is a distinctly average and thoroughly unexceptional rom-com for him and, as such, came as a bit of a disappointment. And I really wanted to enjoy it, even if I was going to end up being one of the minority. If you’re still determined to see this, then at least go into it expecting little more than mild amusement, tonal missteps and mere fragments of nice romance. It’s distinctly lightweight entertainment.