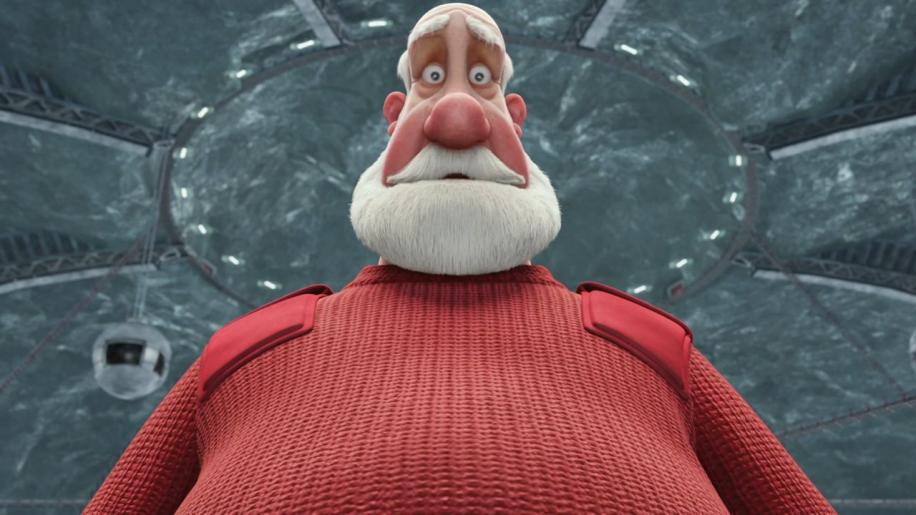 How can Santa deliver billions of presents to the whole world in just one night? Using his vast army of crack Field Elves, a huge airborne sleigh and a North Pole based mission control that puts NASA to shame of course. You thought that NORAD’s Track Santa website was just for fun, but no, it appears that the secret is being maintained in plain sight!

Peter Lord has come a long way with Aardman animations since Morph, with Chicken Run still the most original Claymation film ever made in my opinion. What is a little less well known is their more recent forays into CGI animation techniques. Teaming up with Sony Pictures Animation, Aardman handle the story and character development before handing the actual animation over to Sony in America to bring the movie to life. Released last year to critical acclaim but to limited box office success, Arthur Christmas arrives just in time for this Christmas in glorious 3D, complete with Justin Bieber music video.

As this is a kid’s film I thought my children should help review it! “Daad, you are taking all the fun out of watching the film” moaned the oldest while my youngest quietly donned her 3D glasses and pulled the popcorn a little closer. I did get a few comments out of them, but I think you can take their absorption into the film as the real level of their enjoyment.

Now, we all know that Santa is real, so we must assume this to be some sort of fly on the wall documentary, or at least a re-telling of the facts surrounding a real event right? This is to save us from any awkward questions from the little ones later. We join Santa and his Elven workforce as they are gearing up for the first deliveries. What becomes clear is that it is a family enterprise and there have been a succession of Santas going all the way back to Saint Nicolas himself. Current Santa (Jim Broadbent) is getting on a bit, so his eldest son is making ready to step into the big red suit. Mrs Santa (Imelda Staunton) is the power behind the throne, sorting out the domestic arrangements, negotiating with Greenland, that sort of thing. The modern world might have left Santa behind, but Santa Elect: Steve (Hugh Laurie) is fully connected, with his banks of computers, video links and HoHoHo 3000 hand held device. Number two son Arthur (James McAvoy) is somewhat clumsy, a little less IT savvy and has been put in charge of the letter replying department, no doubt as a way of keeping him out of the way. He really embodies the spirit of Christmas though, while we get the impression that Steve does not actually like children very much and sees them simply as delivery destinations.

With billions of presents to deliver, efficiency is everything and we can only be impressed by the advanced logistics and supply chain solution that Steve has put in place. From the field delivery elves working in their teams of three per house to hit the 18.42 second delivery slot through the wrapping crews and the mission controllers, the entire team is focussed and goal driven. With an SLA of 99.999999945615% accuracy, maybe Santa should consider bidding to take over the Post Office when it is eventually privatised. But what of the 0.00000015384% who did not get their present? Her name is Gwen (Ramona Marquez) and she lives in a little village in Cornwall. Arthur is beside himself that she has been missed, but Steve is unconcerned as the KPIs are within published specifications and Santa is so befuddled by Steve’s figures that he accepts that nothing can be done and toddles off to bed. We must look at the root cause of the initial failure. Viewing the video of the event, we see that an operative became distracted from his Elven duties and the present fell from an unguarded elevated conveyer onto the work floor. It then became buried in discarded packing which also presented a trip hazard, so we find any number of Elf and Safety breaches. It was only good fortune that the incident was not more serious than it ended up becoming. A salutary warning tale for us all.

We cannot go any further without mentioning Grand-Santa (Bill Nighy). Now well into his second century and a little past his best, he remembers the good times, when it was just him, a drunken Elf (“Fell out over Lake Geneva, never saw him again”) and six devoted reindeer. He is not past scoring a few points against either Santa or Steve, so sets out to help Arthur make good Gwen’s Christmas along with Bryony (Ashley Jensen), a devoted elf from the present wrapping division. What could be more straightforward? Nip over to Cornwall, drop off the bike and back in time for Cocoa. Of course, with all delivery operations, things are never as straight forward as this and we follow the story of misdirected deliveries, out of date mapping, equipment failures and untrained operators damaging the hardware. Maybe this is the Post Office after all.

It simply is not possible to go into any sort of storyline without giving away too many spoilers, but suffice to say it is extremely funny with humour on a number of levels ranging from the slapstick of Santa to the sarcastic wit of Grand-Santa. The animation is first rate throughout and the 3D really excellent. My only criticism is that to my mind the movie felt over long, but both of my kids disagreed. They loved the slapstick humour and the twists whereby you thought the present was just about to be successfully delivered only for something to go wrong and the story to continue.

“I liked the film, but there are a few loose ends. Grand-Santa talks about the time Christmas all went wrong, but we don’t know why. Santa is supposedly a bumbling old man, but he must have managed OK before Steve started helping. I nearly cried at the end when they managed to deliver the present.”

"I like the Christmas tree egg timer as the disc started up. The film is really funny and I spotted Shaun the Sheep and the bit from ‘The Wrong Trousers’ with the train track as well as “The Snowman” on a TV. Grand-Santa is quite rude and isn’t very nice to his old reindeer, but at least they all make up in the end”

The storyline does feel stretched though. It could have be seventy minutes long instead of near one hundred without losing any of the important parts of the plot. The vocal performances are on the whole pretty strong with the only real exception being Jim Broadbent. This is a shame as I really rate him as a performer, but here he does not seem to settle into the character. He comes across as bumbling and disorganised where I think the character called for something closer to just not keeping up with technology and the job in general. A bit like when you ask anything too tricky about power tools to the old folks who work in B&Q I suppose. They are always charming and friendly, just not very useful. It is a tricky call, as Grand-Santa is best described as “spry” and still in full possession of most his marbles, so fitting in another oldie between him and the next generation is quite hard.

The original artwork and animation of the individual characters is simply amazing. The sheer amount of detail and body movement is incredible and quite how they create and animate more than 5000 elves for some scenes is mind boggling. The look is almost photo realistic when it comes to the scenes set in the towns and cities while the North Pole / sleigh scenes are more fantasy inspired. Where most animations lack detail, this one is absolutely crammed with it. Check out the wisps of smoke from the chimneys in the opening scenes and the amazing city chase scenes.

For the three to twelve year old age group, this is one of the better modern Christmas tales. There is not as much to entertain the grown-ups as there was in Chicken Run and this probably contributed to the poorish cinema receipts. This will make a great disc to play on Christmas Eve to keep the kids amused while you get on with the serious duty of peeling your bodyweight in sprouts and keeping Great Auntie Doris away from the cooking sherry again!