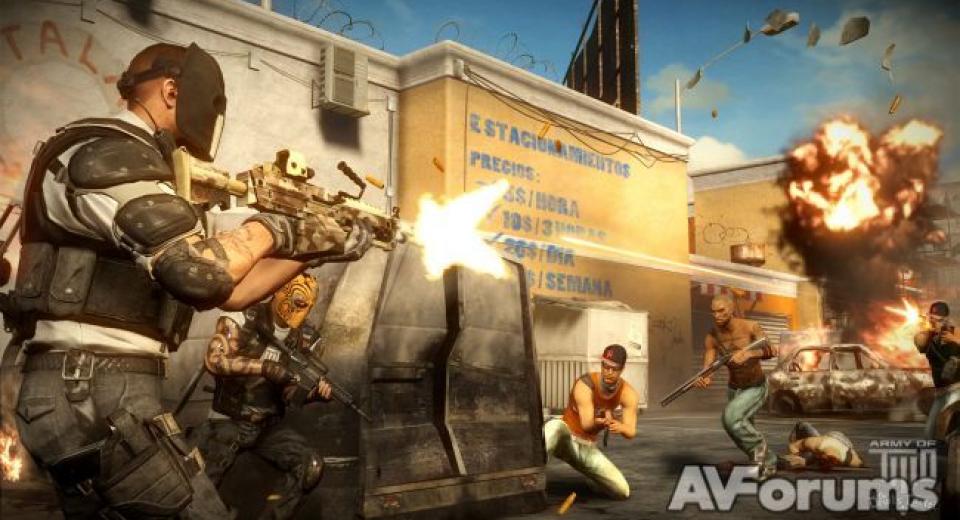 “Don’t you die on me!” shouts a bemasked chest-beating protagonist in Devil’s Cartel, neatly echoing the sentiments of shareholders as Electronic Arts massages the latest Army of Two into being. It’s a bizarre franchise, being neither blockbuster hit nor critical success; and yet here we find its third outing stealthily limping onto shelves before the end of the financial year accompanied by a complete no-show in terms of PR and aimed at an audience that doesn’t really seem to exist.
So here we go. Army of Two: Devil’s Cartel is a third-person shooter with two-player co-op features, built upon the destructive capabilities of DICE’s award-winning Frostbite 2 engine. It’s louder, more brash and full of itself than its forebears, and works entirely around the ethos that if you’re not experiencing an explosion every two seconds, then you’re not being entertained; period.
I couldn’t tell you much about its protagonists, because the game gives you no reason to care. They still wear ridiculous masks, they join forces with another team of two and a tough-talking female contact that flits in and out of the paper-thin story at key junctures, and everybody, everybody, loves violence a little too much for comfort (“Enemy sighted!”, “GOOD, I could do with some CLOSE QUARTERS COMBAT!”). The majority of the action takes place in South America, so there are drug cartels with larger-than-life bosses to eviscerate, politicians to protect, and various slums, crypts and assorted over-utilised locales to visit along the way. The script and voice acting are absolutely terrible. There’s a desperate attempt at camaraderie and bro-friendly humour throughout, but it’s delivered with lines that feel as if they were ripped from straight-to-video buddy-cop movies and chinese-whispered to death in the process; it’s just painful, and not even in an entertainingly bad fashion. At one point somebody gets wounded and the music gets a bit emotional, which, along with a moment in which your playable character reveals he has a girlfriend back home, are the sole attempts at character development and empathy. “You have a girlfriend?”, “Yeah”, “...What’s his name?” “Hahaha”.
Nice one bro!
Ignoring the context and setting for a moment then, Devil’s Cartel does at least function on the mechanical level of being a perfectly workmanlike third-person shooter. Left-trigger to lock on, right trigger to shoot, directional pad for commanding your teammate. It works, it’s intuitive, and there are few technical glitches to worry about. Refreshingly, there are also HD textures that can be installed on the 360 version, which gives the otherwise-perfunctory visuals at least a little extra oomph this late into the console cycle.
And as Frostbite is humming away underneath all that destruction, at least there’s a huge amount of breakable scenery to toy with. The cover system automates the process of shifting between crates, walls and doorways to a single button click, and although the majority of the arsenal feels a little lightweight, a newly-implemented rage mode manages to unleash the sort of environmental devastation most players will be yearning for. Killing enemies tops up an ominously-glowing orange meter, and once activated all hell breaks loose; bullets can knock down walls, sever limbs and explode bits of concrete, and shotguns can be rapid-fired to blow waves of enemy soldiers of their feet. But even with those destructive moments and the introduction of a ghostly tactical overlay to show best paths for flanking and teamwork, Devil’s Cartel suffers from mind-numbingly bland design for the majority of its short length.
There’s a routine to the levels, and it’s one that’s borne out of a desire to make the campaign a time-trial and score attack heaven. Every corridor leads to a combat arena of some description, in which wave upon wave of enemies will climb over the walls or walk through doors until enough are dispatched and the requisite exit opens. Repeat. Repeat. Repeat. Sometimes there’s a mounted gun to flank, occasionally there’s a vehicle section to endure, and every now and then there’s a bullet-sponge boss and a quick cutscene to bookend progress. “Kerplink!” - ACHIEVEMENT UNLOCKED. You are not on the leaderboard. Push A to continue.
But the repetitiveness of the design is all about those leaderboards. Every kill earns a score depending on its outlandishness, and players are encouraged to replay sections in the hopes of one-upping friends with fancy co-op executions and destructive multi-death grenade lobs. Those monotonous waves of enemies suddenly make sense in the context of the scoring system, but without a particularly satisfying combat flow, interesting level design or heightened means of player agency within the environment, Devil’s Cartel’s competitive aspiration ultimately falls flat. What’s left is a highly disjointed campaign that takes a break every 10-15 minutes to tally up the points, and nothing else. There are no other modes to dabble with.

Perhaps the most interesting point about Army of Two: Devil’s Cartel is that it may well be evidence of the sort of project thought long-lost in the modern era of massive-budget blockbusters and small-scale indie projects. It’s an incredibly average shooter with mid-tier production values and the sort of quality that was once associated with a vast array of developers, but now lies in the domain of but a few. Oversaturation of the market killed the others, but Army of Two seemingly will not lie down.
On balance, I’m not sure that’s a good thing. Devil’s Cartel is a project with precious little to mark it out other than its terrible dialogue and misplaced score-attack aspirations. It’s not broken and it’s not frustrating, but when those are the impressions you’re left with, what exactly is the point?