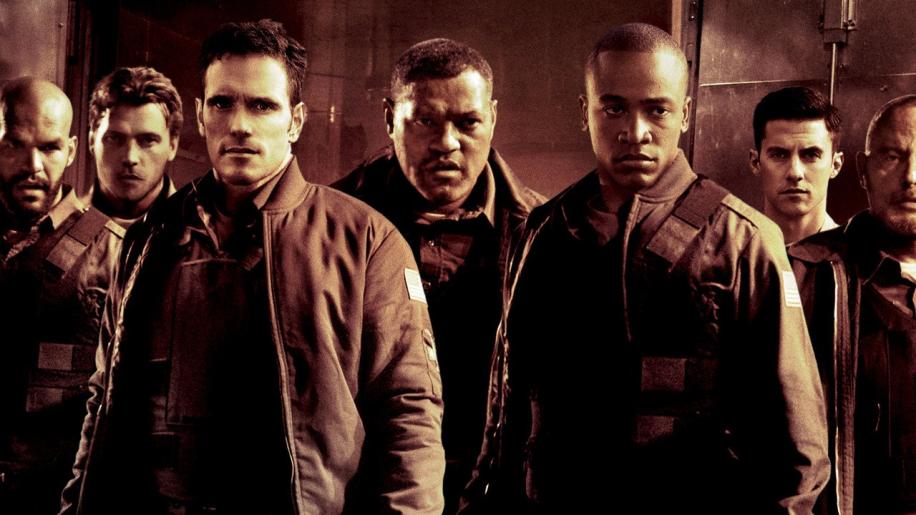 Matt Dillon - Crash, Rumble Fish. Jean Reno - Leon, Nikita. Lawrence Fishburne - Morpheus in the Matrix. I know they aren't A-list actors (Larry may have come close with the Matrix) but they aren't amateurs either. Leon is one of my all-time favourite movies, The Matrix was groundbreaking, and Rumble Fish was one of Coppola's early classics (and an early example of Mickey Rourke's abilities), so no matter how far this trio of actors have drifted from fame and fortune (and decent scripts) I thought that the three of them together could not have all agreed to participate in a feature film that wasn't halfway decent. Surely, the odds were in the favour of a solid thriller?
Gulf War vet Ty Hackett has returned home to a wayward younger brother and a menial pay packet as an armoured truck security guard. Their parents dead, he is his brother's keeper, and whilst he tries his best, child services are desperate to get their claws in. His new security guard team are a close-knit bunch who include gun-loving Baines and Frenchman Quinn, and are led by the experienced Mike Cochrone. After a whopping $42 Million is stolen, however, the team are put through their paces, testing loyalties and morality to the limit, and putting lives on the line.
A very thin heist thriller, the action and drama in Armored basically all takes place in one abandoned warehouse as the characters show their true colours, take sides, and then basically shoot it out. It has an extremely simple plot, the majority of the twists taking place during the set-up, and the action predicated upon the expectation that every single one of the armed robbers would behave like a total idiot. Of course, they all do, the narrative getting increasingly far-fetched as it rolls along to an impossibly (at least in law) conclusion.
See the trouble with this movie is that it actually has quite a good cast, with quite a good build-up, and, a couple of twists down the road, after you feel like you've gotten to know a few of the characters, the whole things gets put through a cheese-grater, and comes out a mess. Characters suddenly devolve into one-dimensional caricatures, the money at stake seemingly turning everybody into cold-blooded killers. And making them idiots to boot. It is painful to watch, particularly since you feel like you have invested a little time in this crew.
Worse still, the protagonist is so insipid and stupid that you almost want the bad guys to win. Played by the no-name Columbus Short (who you probably won't remember from his bit parts in lazy films like Quarantine and Whiteout), he just does not evoke any sympathy or empathy with his self-created predicament. He spends most of the movie sitting back and watching his slimy opponents snap at each other and trip over their own feet, never displaying any particular skills and seemingly surviving each successive confrontation merely as a result of the utter ineptitude of the bad guys, rather than through any of his own ingenuity. Short won't get any decent roles off the back of this, showing about as much talent as Channing Tatum (although I guess that hasn't stopped him) on a good day, and it is interesting to imagine someone with tangible charisma taking the role as it could have changed things dramatically.
And Fishburne, Reno and Matt Dillon, for all their noteworthy effort, fall into that category of portraying those aforementioned one-dimensional characters. They ham it up to the max in each of their requisite parts, but when the guns come out, they just become painful-to-watch caricatures, b-movie henchmen who shoot first, think second, and question what they are doing. It is silly, implausible and completely takes you out of the picture. I know these guys are not doing too well at the moment, Fishburne is flogging the dead horse that is CSI and Reno's most prominent roles recently have been in the lacklustre Pink Panther reboots, and Armored has 'paycheque' written all over it for the cast. It's a shame because these guys are capable of much more.
The Director Nimrod Antal, surprisingly, acquits himself quite well. He has some style, investing a lot more in the cinematography than you would expect for this kind of material, and getting the most out of his ensemble cast, notwithstanding Columbus Short's lacklustre input and the limitations of the script. He shot Vacancy a couple of years ago, which made for a surprisingly entertaining little horror thriller, and I bet he hoped to do the same thing here with the armoured truck heist thriller. Unfortunately, between a feeble leading man, a bunch of wafer-thin characters and a Swiss-cheese plot, none of his stylish camerawork can dig this dead dog out of its grave.