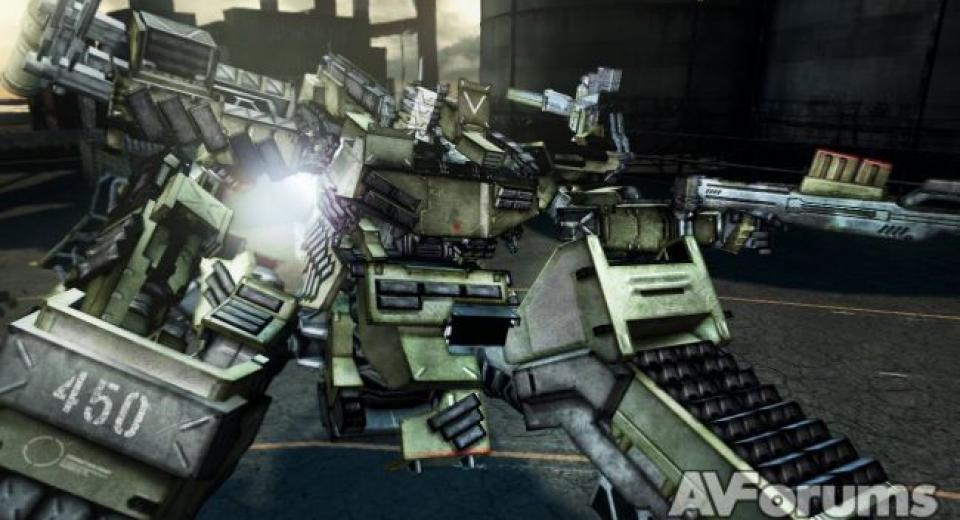 Not many franchises can trace their original fame all the way back to the days of PS1 and still live to tell the tale on PS3. But here we have Armored Core V, the 14th game to see release over in the West. Yes you read that right the fourteenth, yet we are only on the fifth instalment. That’s a hell of a lot of sequels/spin-offs or whatever you call them between 1997 and 2012.

Why have there been so many titles in the series? Who knows, but it feels like it’s getting a bit long in the tooth by now and the franchise has never really built upon its original concept from way back when. The Eastern game offers players a blend of third person shooting combined with a handful of Transformers-inspired techno gadgetry. I think we all know that the Eastern crowd are partial to anything mecha-inspired when it comes to gaming, TV and Manga etc.

What’s not to like about it then? I mean come on; Transformer-style robots battling it out across multiple cities in an attempt to destroy everything in sight. How could you not find this entertaining? Well that’s quite easy if you follow the same development rituals that From Software (FS) has implemented here.

You see that’s the trouble with being in the business for quite a while, it can make people lazy and rest on their laurels for far too long and fear change when it comes to their beloved franchise. I’m not for any second saying that FS have peddled a heap of stinking dog turd, but they sure could have provided us with a much more enjoyable title than what we have here. Talking the game up could be an easy job but there is a complete lack of scale to Armored Core V when it comes to controlling your robot or how the battles themselves take place. The mechs must look and feel massive whilst taking down opposing bots must also fill you with excitement, trepidation and satisfaction when you do eventually shut them down. Sadly though, none of this ever happens; your mech feels puny as does the world around you.

Before there’s any chance to stick my head on a sharpened pole in rage, I know that the developers have purposely made all vehicles smaller and put a greater emphasis on tactics and stealth, but why? Can you honestly say that sneaking around in a giant robot is anywhere near as satisfying as being given free-rein to destroy your environment and enemies with all guns blazing? I think not.

It’s hard to see how any sort of stealthy approach could be taken anyway considering how much of the ground your walker churns up from its legs/tracks. At the rate the debris flies out you’d expect massive gouges in the floor, but there aren’t. This city is made of magic tarmac I think you will find.

From Software must be applauded however for trying to redirect the series back to its grass roots with the city backdrop making a welcome return which does add some variety to the gameplay. It allows you to attack one way then dive around the corner to flank your slower adversaries or acrobatically leap over the building you take shelter behind. But whilst that is all well and good, it’s hard to find this as enjoyable as it sounds when the city was designed by a landscape artist with the blandest of colour palettes and the smallest of imaginations. Why do some hard work when the copy and paste function will do the job for you?

I was in two minds when I came to review this title and there’s good reason for being in this predicament. Firstly, there is an excellent title that should be enjoyed by many more people out there and could be brilliant. But my second point of view screams ‘Why the hell did they do that!?’ It wouldn’t be an unfair criticism to believe that the game was developed by two different studios then put together before release, but it wasn’t. It’s almost as if the developers have purposely limited themselves throughout the entire game by contradicting their own moves.

Let me explain what I mean. Take the customisation of your vehicle for example, which is absolutely brilliant I must say before anyone thinks I’m being unfair. You are given hundreds, maybe even thousands of customisation options for each and every mech you have. It has three paint layers, can have its own decal and then you get to all the weaponry and parts you can buy and unlock.

You see, this is where the game should have played to its strengths more because this is where it truly shines. Each choice you make when changing your unit should be a tough one because it has an effect on its overall performance somehow. Do you sacrifice mobility over speed when changing to tracks as opposed to legs? Or do you alter your core’s vulnerability from one ammo type to another? Your guess is as good as mine because most of the time you’ll be unaware of what enemies attack with or what they are vulnerable to which makes your choices seemingly less important. At first, this level of detail can be overwhelming to new players as the menu system is overly complicated and never explained to you, which is just infuriating. You’d be far more likely to delve into it head-first were you to understand it and know what the hell you were doing.

The introduction to the title is very good indeed as you are treated to a visually stunning cut-scene and are so constantly between missions and at their start. Unfortunately though, the benchmark for the rest of the game is quite low by today’s standards as the level of detail and quality during actual play is not very good.

Not only is this evident through its actual appearance, but also through its mechanics and core gameplay. Every battle you partake in is won by just blasting everything in sight with tactics going out of the window in an instant and you see rinse and repeat enemies everywhere you go. That’s whilst you travel along the most mundane route imaginable and dare not stray away from in fear of being beeped at for going near the ‘battlefield constraint limit’. I mean really? Have we not grown out of this by now?

From Software decided to take a risky move this time around by pitting the game as a totally online experience, with a hollow single player experience as a result, and leaving out any sort of logical main menu. This would work, if there were any great number of players globally to make it interesting and it’s unlikely that your friends will be seen playing this for days on end. You would, then, turn to the single player when you have no friends to play with online. That is if any of it made any more sense than poking yourself in the eye for entertainment. Over and over again until you lost 95% of your vision in one eye to see what it would be like to live as a pirate. The typical Japanese dialogue is something that you can live with as it is bearable, but you might as well make up your own story as you progress. It’ll probably make just as much sense.

I really wanted to enjoy this game. I saw it on the release calendar and actually looked forward to a thrilling mech-destroying adventure but I can’t help but feel that From Software have let me down big style this month. For a game with so much potential for scale and an excellent story mode, it’s frustrating to see how From Software managed to do themselves so wrong.

At its full retail price, it’s hard to recommend anyone play this really, given its short-term appeal. If you have friends to play this with or a very high level of patience then you would enjoy this game a hell of a lot more. The ‘high risk, high reward’ strategy definitely hasn’t looked like it’s paid off this time though for From Software.

At the end of the day, Armored Core will likely go down as one of the dissapointing titles of 2012 and, being honest, it probably should do too. That's not me being overly-harsh either it's just that the game has so much potential and wastes it in every single way possible. Recommending a title like this is hard without getting a dissaproving look from the majority who are quick to judge but there are some genuinely enjoyable moments in there somewhere.

Just don't expect to know quite what they are until you have done some searching for them first.