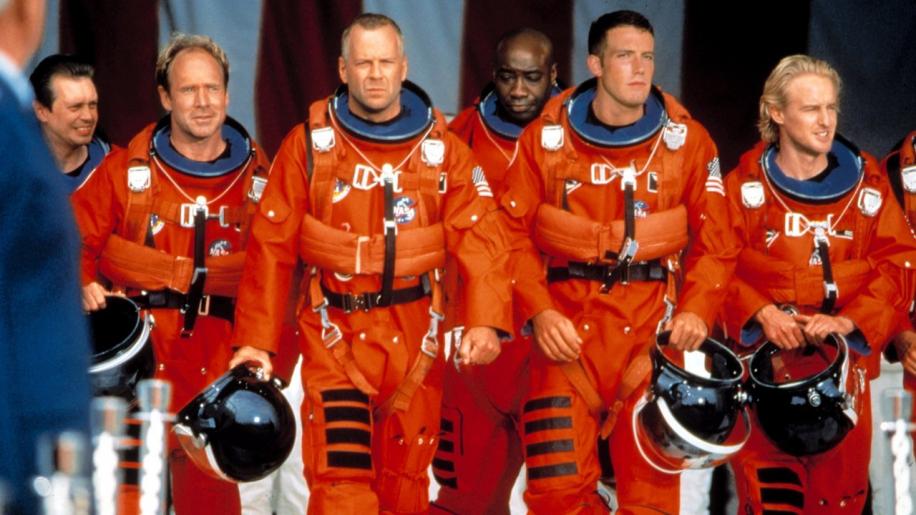 The film's presented in its original 2.35:1 aspect ratio (anamorphically of course) and looks fantastic. There's nothing subtle about this film, every single dollar is there on the screen for you to gaze at in awe and wonder. From the truly stunning CGI shots of the asteroid and the space shuttles (which are packed with fine detail) to the bold colours and strong fidelity of that ever present American flag, this transfer really is a joy to behold.

If your idea of a good Dolby Digital 5.1 mix is one which continually bombards you with explosions and Aerosmith numbers then this is about as good as it gets. Even the credits on this damn movie are accompanied by the kind of spatial effects that could put most action films to shame. Once those meteor fragments start tearing New York apart in the opening sequence you know your in for a real treat when it comes to bass extension. The only downside is that we would have loved to have had a DTS track to play around with. After all, if the far more subdued Hannibal merits one, why not Armageddon?

Once upon a time it was a flipper with no extras. Now it's become one of the crowning jewels of Buena Vista's DVD range thanks to the decision to bring across all of the extras which made the US Criterion Edition such a must-have. The first disc includes two audio commentaries, the first by Michael Bay, Jerry Bruckheimer, Bruce Willis and Ben Affleck, while the second is by the cinematographer, a NASA consultant and an asteroid expert. This is the easily the more entertaining of the two since they point out all of the inaccuracies as it goes along. Disc two features: a collection of deleted scenes, an extensive collection of Special Effects featurettes focussing on various aspects of the production, a collection of featurettes dealing with Armageddon's production design, two storyboard sequences, an Aerosmith music video with an intro from the band and the original theatrical trailer. This is such a fully comprehensive package, you're not really gonna to want to miss a thing. Explosive stuff.Dumb-as-they-come action flick offers enough extras, explosions and flashy CGI to keep any AV nut happy