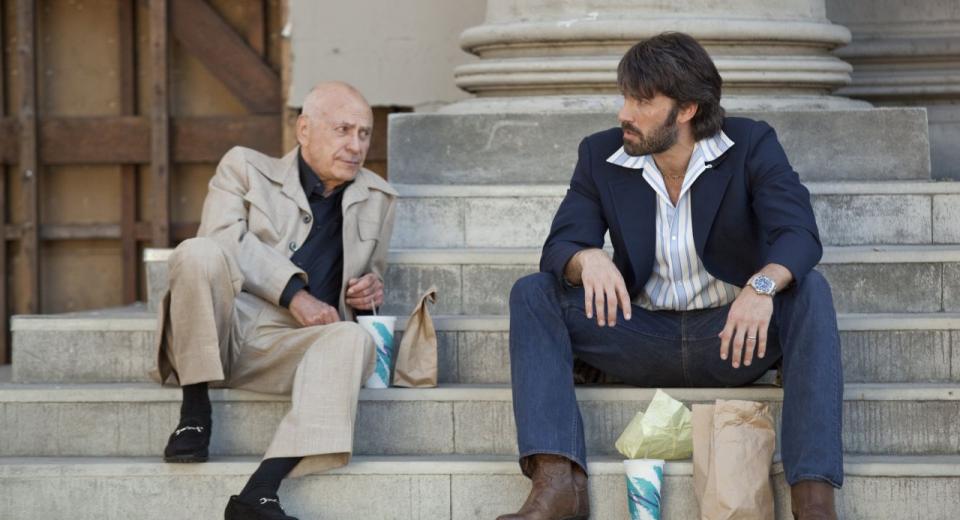 Argo’s Region Free UK Blu-ray release comes boasting a faithful, largely very impressive 1080p/AVC High Definition video presentation in the movie’s original theatrical aspect ratio of 2.4:1 widescreen. Right from the outset the blend of old-fashioned stylistic film choices (the 70s credits and mix of grainy news footage with ‘new’ shots) sets the scene and era for the piece, delivering a film which looks very good – but distinctly filmic when compared with most glossy modern blockbusters. Once you get past this fact you’ll find very little to complain about in terms of visuals.

Detail is excellent throughout, allowing for excellent skin textures – the individual hairs on the prevalent facial hair that the key cast members boast in typical 70s style – as well as clothing weaves; authentic background nuances allowing the environments to come alive, and some solid fine object detail, all of which come complete without any frustrating signs of banding, blocking, crush, artifacting, overt edge enhancement, or excessive DNR application. Sure, there’s a fair amount of processing that has been done here, and the largely digital scene-setting fly-over shots do seem quite at odds with the rest of the piece, with their cleaner, more glossy visuals, but this is all par for the course in a film which so easy slips into its 70s period setting, whilst also never concealing the fact that it was a 2012 production. The colour scheme has been similarly desaturated, and a grungy look applied to several scenes, but this is all in-line with what you would expect, and only fits the style, never taking you out of the picture, nor making you thinking that it was anything but intentional. Matching up to its theatrical presentation, Argo debuts on Blu-ray looking precisely the way that it should. The accompanying DTS-HD Master Audio 5.1 track is also very satisfying, and has some distinct moments where it will likely surprise you with its potency – not just during the more tense sequences towards the end of the film; not just during the more intense crowd-based scene; but also just about whenever they crack on a suitable period music track and allow it to burst out into your living room as if you were right there with them in the movie, listening to it. It’s just not the sort of movie where you would expect to come across such an involving aural accompaniment, but, then again, Affleck’s The Town offered a similarly immersive experience, so there shouldn’t be too much surprise that they’ve pulled it off again.

Dialogue comes across clearly and coherently throughout – even if the words are often disseminated at Aaron Sorkin/West Wing-speed – prominently presented from largely across the frontal array. Effects are myriad, but are almost always utilised to bring us a heady riot-based atmosphere; a country in chaos; terrified hostages; angry rioters and a generally angry public. To this end we get superb surround usage to put you in the thick of things, and the track is never afraid of asking for support from the LFE channel to lend further weight to the intensity of the scenes. Of course there are some louder scenes, with gunshots, aircraft engines, and an almost unbearable battering on the windows of a vehicle passing through an angry crowd. The subtler moments don’t get ignored either, and the track appears to be prepared to involve every little nuance when it comes to crafting a suitably potent aural experience. The score never interferes with the piece and you can go for minutes without any seeming accompaniment, but it is also wonderfully utilised to further heighten the tension during the escape sequences, whilst also – as noted before – igniting the soundstage whenever someone sticks a record on. You really will notice the sudden, immersive shift. An impressive offering which is almost impossible to fault. Argo comes boasting the same impressive set of extras which adorn the US release, but graduates to the definitive release of the film with its offering of both cuts of the movie.

With the subject-matter now declassified, the real-life individuals involved are now at liberty to speak (reasonably freely) about what went down, and so we get to hear from some pretty damn prestigious people, including CIA exfiltration specialist Tony Mendez himself, as well as ex-President Jimmy Carter!

Eyewitness Account offers up a PiP track that boasts interview snippets from most every real-life individual involved in the crisis, from President Carter to Tony Mendez, as well as several of the hostages who were trapped in both the Canadian Ambassador’s residence and the embassy itself. Comparing their real experiences with the on-screen action is involving and interesting in the extreme, lending weight to this dramatic reconstruction, whilst reminding you that the true tale – whilst perhaps not quite as glamorous – was just as torturous. Insightful and worthy, this is an excellent accompaniment which boasts a rare core of participants. Not to be missed.

Commentary with Director Ben Affleck and Writer Chris Terrio makes for an excellent second-tier accompaniment. Sure, Affleck is his usual reserved self – as anybody familiar with his commentaries will know – but the background information and technical detail on offer is never less than impressive, charting the film’s production from concept to script; from casting to production design, with nods towards all the wonderful little touches that Affleck and his crew used to make this near-perfect thriller. Whilst not reflecting on the historical background as much as the PiP track – obviously, given the participants – there’s still a nice blend of production information and anecdotal trivia. Certainly worth dipping into.

Rescued from Tehran: We Were There is a 17-minute Featurette which once again reunited President Carter, Mendez and the 6 hostage escapees for a tough but worthwhile discussion on their real-life experiences during the siege. Although you may feel you’ve gained everything you need to from their PiP track when it comes to this group, this is a nice alternative method of getting a quick-fix relation of the facts.

Absolute Authenticity spends 11 minutes looking at the lengths Affleck went to in order to ground the film with a suitably authentic period look, something which does not really fully hit home until you watch the end credits of the film. Sterling work.

The CIA and Hollywood Connection takes 6 minutes to look at the work that the clandestine spy organisation did with one of the most outspoken, publicly larger-than-life entities on the planet. It is all too short, and far from as weighty and informative as the other background Featurettes, which is a shame considering most fans would have been very interested to hear what other exploits the CIA got up to using their filmmaking connections.

Escape from Iran: The Hollywood Optionis not directly related to the film, but is still very relevant; a 2005 Documentary commissioned for TV to commemorate the 25th Anniversary of the incident, which again utilises interview snippets with the real-life individuals to retell the fantastic-but-true story. Whilst it may seem like a surprising choice, it’s nice that they bothered to include it here in these extras. Argo tells the greatest true mission impossible story. Despite the fictional flourishes used to heighten the tension, and the dark and witty underbelly of the script, this is what really happened; a stunning piece of courageous but understated spy-work – an impossible mission perpetuated by a real-life super-spy. Basking in its Oscar glory, don’t let Argo fall by the wayside – Ben Affleck’s latest actor/director effort is another wonderful little gem which should impress the same folk that got on well with Zero Dark Thirty.

On Region Free UK Blu-ray we get both the original perfectly-paced Theatrical Cut of the movie and the slightly longer Extended Version, which adds a tiny bit more depth to the lead character’s backstory, and which appears to immediately put this release above the US counterpart, which boasts only the Theatrical Cut. We also get the same impressive video and audio as well as a burgeoning selection of worthy extras, making this a must-have purchase for fans of the film and an assured blind buy for those interested in checking it out. Recommended.