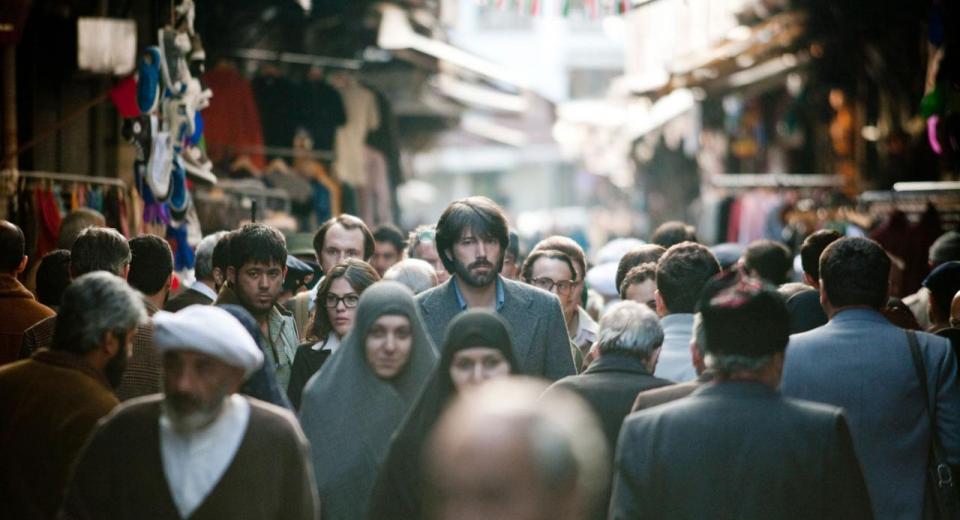 "The whole country is watching you. They just don't know it."

With all the Bonds, Bournes and Mission: Impossible tales out there, it is sometimes hard to come back down to earth to watch real life events unfold. We are so desensitised by the wild action and adventure - no matter how much these franchises, to varying degrees, attempt to ground themselves in reality - that the real exploits of spies seem positively mundane by comparison.

Argo tells the greatest true mission impossible story. Despite the fictional flourishes used to heighten the tension, and the dark and witty underbelly of the script, this is what really happened; a stunning piece of courageous but understated spy-work - an impossible mission perpetuated by a real-life super-spy. And to think, if the files had not been declassified a few years ago, we might have never known what really happened...

It's 1979 and militant protesters storm the US Embassy in Tehran, enraged after all the years of oppression they suffered under an autocratic Shah who was backed by the US government. Several dozen US citizens are taken hostage, but six manage to get away and take up refuge at the private residence of the Canadian ambassador. Although negotiations are underway to retrieve the hostages in the Embassy, the six who escaped are on their own – and if they’re caught, they’ll be executed. With the Iranian revolutionaries putting together the pieces to find the missing people, it falls upon CIA expert exfiltration specialist Tony Mendez to find a workable plan to get them out. What he comes up with is a grand scheme involving a fake movie production and a group of filmmakers doing location scouting for a film that does not even exist. It’s a wild idea, but it might just work.

“There are only bad options. It’s about finding the best one.”

Ben Affleck has really come a long way. Perhaps he showed early signs of decent acting talent (Chasing Amy) and gained acclaim for his writing (Good Will Hunting), but he soon became known for the likes of Armageddon and Pearl Harbour. Even his shot at following Harrison Ford’s footsteps in the abortive Jack Ryan reboot, The Sum of All Fears and his fairly decent harder-edged Marvel superhero outing in Daredevil failed to gain the support required to see them evolve into the popular franchise they were expected to be, and his subsequent films proved to be complete flops (Gigli, Paycheck).

Then, in 2007, he made his directorial debut with Gone Baby Gone (which he also wrote and produced) and people suddenly started to sit up and pay attention. It was a great little thriller, brimming with mood and atmosphere, and introducing the world to a distinctive style that would perpetuate all of his subsequent productions. His sophomore writer/director effort, The Town, also saw him taking the lead, delivering a superior crime drama which – whilst following on in the same vein as Heat – brought with it a welcome personal edge thanks to Affleck’s own experiences growing up in Boston.

His latest project, Argo, is perhaps his best yet. Honing real-life events into a tense, exciting, two-hour thriller is not an easy task, yet he has done precisely that (Zero Dark Thirty would follow in this successful vein). Sure, there are liberties taken with the truth – events may not have happened precisely like this – but there’s a shocking amount of authenticity to the material, a fact which only really becomes evident as the end credits roll and we see split-screen comparison stills between the real-life events (and characters) and what is depicted in the movie. Affleck’s meticulous attention to detail really pays dividends, using this touch to hammer home the fact that you’re not watching some fictional spy thriller; you’re watching history.

Taking the lead as the CIA exfiltration expert Tony Mendez, Affleck also manages to deliver a remarkably – and humbly – understated performance which is just about as far away as you could get from grandstanding theatrics as possible. Sure, this may mean that he has less chance of winning an Oscar (although it worked out for Clooney with a Nomination for his standout work in a similarly understated role in the brilliant Michael Clayton), but he deserves as much praise for his restrained contribution as an actor as he does for his impressive work behind the camera. With biting sarcastic undertones, and genuine commitment to the cause, he undertakes a desperate mission without even the slightest hint of the kind of trademark flourishes you normally expect from spy hero characters; this guy knows that fists and firefights are not an option – it’s preparation, a cool head, a good plan and a bit of luck that will see him through.

In a stroke of genius, the six escapees are portrayed by little-known actors sporting thick seventies looks that only further help them convince as the real deal. You may recognise the likes of Rory Cochrane (CSI: Miami), Clea DuVall (The Faculty), Tate Donovan (The O.C.), Scoot McNairy (Monsters, Killing Them Softly), Kerry Bishe (Scrubs) and Christopher Denham (Shutter Island) from their various largely TV-based or bit-part supporting work, but their relative lack of fame only helps them further craft credible characters.

Of course there are plenty of bigger names involved, with Bryan Cranston on better form than in the Total Recall remake (but not as good form as in Drive) as Mendez’s boss; and John Goodman (The Artist, The Big Lebowski) and Alan Arkin (Grosse Pointe Blank, Little Miss Sunshine) having a ball playing a couple of wonderfully cynical Hollywood filmmakers. They get some of the best lines, and provide the undercurrent of well-placed, satirical humour which never threatens to diminish the more dramatic tone or tragedy of the piece because, well, what else would you expect from entrenched Hollywood mainstays?

Despite the wonderful performances, it’s Affleck’s direction which really holds this film together (making you wonder why he didn’t get a clearly much-deserved Best Director nod at least), building the tension right from the opening attack on the Embassy, and seldom letting up, even as the days, weeks and months go by whilst the exfiltration plan is put into action. Through a series of subtle and cleverly engineered setpieces he gives us insight into what it must be like to be trapped in such a startlingly foreign land, where any wrong move could see you taken away by people who neither speak the same language as you, nor care for human rights in quite the same way as Westerners have come to expect.

Yet it’s clear that he’s not passing judgment on the situation in Iran, emphasising in a brilliantly succinct semi-animated prologue just how much the hostage situation was precipitated by the actions of the US themselves in the first place. We may be on the side of the escapees – desperate to see them get out rather than end up summarily executed – but you never get the feeling that this is a simplistic tale of good guys and bad guys; or US ‘patriots’ and middle eastern ‘terrorists’. It’s thanks to Affleck’s fine balancing of the source material that the end result is not judgmental, just eminently factual (if not in every specific detail, then certainly in spirit). As much as A Separation gave us insight into this new culture; almost like a completely different planet, Argo not only gives us a better look at the history of the country, but also helps us better relate to it through a story involving Westerners trapped in-country.

It may not be the substance of a Mission: Impossible entry – there’s no high-rise stunts here – but this is still very much a real ‘mission: impossible’. Indeed the closest thing we’ve seen to this kind of real spy thriller is probably the late Tony Scott’s highly underrated Robert Redford/Brad Pitt collaboration – Spy Game – which, whilst far more stylised and obvious boasting more ‘event’ scenes, still largely plays out through verbal machinations and shady pay-offs, rather than high-octane action. Yet what is remarkable about Argo is that it does not even require that kind of heightened style to keep it tense.

From the simple act of taking a breath of fresh air in a place where enemy forces may spot you, to the potential threat of the housekeeper whose loyalties and allegiances may be tested on interrogation; from the group’s first testing trip out to a crowded bazaar to the briefing on how they have to talk their way through increasingly suspicious layers of militia at the airport. You simply don’t know how they are going to do it; who is going to make it out; who is going to be caught – anything could go wrong at any time, and it’s here where the tension lies, simply never letting up until the credits finally roll.

Maybe it doesn’t have grand stunts; epic, exotic locales; powerhouse performances; or intense action sequences, but this is every bit a brilliant spy thriller, perfectly engineered by Ben Affleck, driven by his central performance, and superbly rounded out by a slew of supporting contributions. It’s no wonder really that it won Best Picture; it just shook those up that had neglected to see it during its theatrical run.

One of those very rare movies that takes a true tale and tells it in a way which is at once both respectful and reasonably authentic when it comes to the real events, whilst also being blisteringly exciting in its non-stop tension across the duration. Masterful filmmaking, impressive acting, and true substance behind the tense real-life story – what more could you want?

Enjoying its second – post-Oscar-winning-glory – wind, Argo will likely prove immensely popular on the home formats, not least for those who didn’t take the risk during its relatively short theatrical run, but also for those who are interested in discovering what the Extended Cut might have to offer.

Undoubtedly the Theatrical Edition is a work of efficient, no-wasted-time filmmaking, packing a pretty long story into a just about ideal 2 hour runtime. The build-up is fast, but the middle section is pure slow-burning tension, as the stakes get raised and the authorities close in – it’s perfectly paced, so some might wonder whether there was any need to add scenes back in. The answer is, quite bluntly, no. However the beauty of re-watching the movie in the comfort of your own home is that you’ll happily spend a longer period of time on this particular story, and you’ll barely notice the additional 9 minutes fitted back in.

For those who haven’t yet seen the movie, it might be worth watching the Theatrical Cut first. Aside from being the cut of the film that earned it a Best Picture, it was also awarded Best Editing, and it is also probably the optimum length and perfect pacing for a first watch.

Honestly, the added material only really concerns the backstory of the lead character Mendez, better developing the situation back home with his estranged wife and young son; as such it definitely sits better on a second viewing. An extra couple of scenes towards the beginning further look at how distant his family is, and a couple of brief touches, both in the middle and at the end, round out this thread and perhaps give it a more satisfying arc than the Theatrical Cut afforded. Beyond that, there’s just a hint of additional hostage footage somewhere in the mix, although you’d be forgiven for barely noticing it.

Either way, however, you simply must check out this movie.