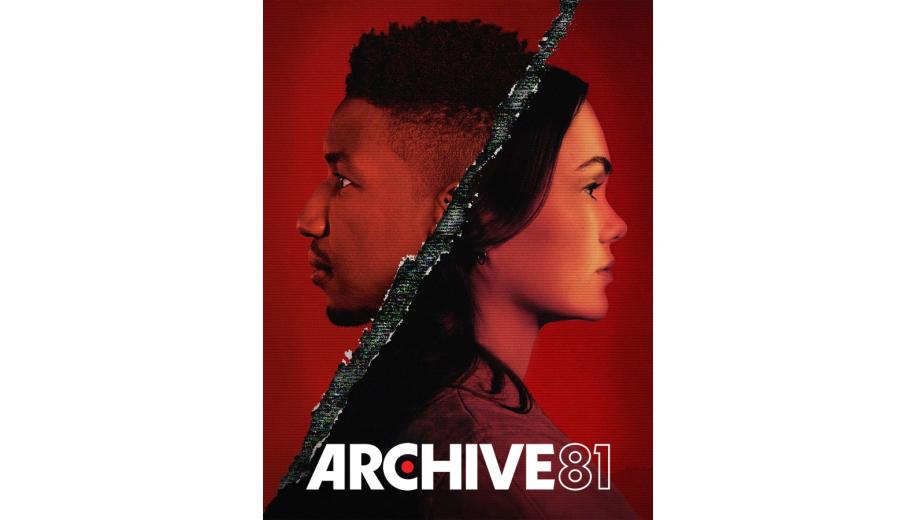 What is it about magnetic tape that's so appealing? As far as I’m concerned, it’s the mixture of the mechanical and the magical. As an artefact, a videotape is pleasingly clunky to hold but, not only that, its cover protects a secret inside, a fragile strip of tape, a forbidden ribbon which somehow stores pictures and sound.

Its defunct analogue adjacent nature lends it a strange sort of credible enchantment, like the notion of finding demonic messages when playing a record backwards. The fact that it is now a defunct medium also lends it a cemeterial air, shelves of black VHS cases given the atmosphere of a media ossuary. It’s this exact feeling that supernatural Netflix drama Archive 81 taps into.

Dan Turner is a magnetic tape restoration specialist for a museum of moving pictures. His skills have got him noticed by Virgil Davenport, a large corporation owner with a strange collection of esoteric camcorder recordings. The tapes chronicle the events leading up to a fire in an unusual New York apartment building in the nineties all recorded by Melody, a sociology student who was searching for her mother but who went missing following the fire. It’s not Dan’s usual line of work, but a photo in the background of one the tapes has caught his eye and is that a shape he saw in the white noise?

... smart in its use of secrets and reveals, swinging the hardest when it’s giving away the least.

Adapted from the podcast of the same name, Archive 81 keeps its languorous structure from its source material, even if it plays fast and loose with some of its other aspects. And there’s something about those slow burn podcasts like Archive 81, The Black Tapes and others that hooks the listener in for the long haul, drip feeding tantalising revelations (even when they don’t always have a map for where those revelations are going to lead). Netflix’s adaptation has one up on its source in that it has a basic structure and story already mapped out for it so showrunner Rebecca Sonnenshine has been able to hammer it into a more satisfying 8-episode shape with a tighter focus on the premise.

One of the most engaging elements of that premise is the fact that secrets are hidden on these tapes, waiting to be discovered only by someone with the right skills to restore them. The scenes of intricate and meticulous tape restoration are some of the series most hypnotic and shot in a way intimate enough to bring us into the process, making us feel like we’re the ones uncovering these secrets with Dan. The fact that these secrets reveal other dimensions, demons, ancient cults and covens, make the process all the more mesmerising. And, for the most part, Archive 81 is smart in its use of secrets and reveals, swinging the hardest when it’s giving away the least. Its early episodes unfold slowly but deliberately, offering glimpses beyond the veil which engender an untethered sense of dread in its characters.

It certainly helps that Dan is played with breathless disbelief by Mamoudou Athie (The Get Down, Black Box) who sinks into his role with suitable unease, slowly losing his grip on reality, almost like a modern day Jack Torrence. Playing opposite him, thirty years in the past, is Dini Shihabi (Altered Carbon, Jack Ryan) as Melody, the new tenant in an apartment building that seems to house a cult reminiscent of Rosemary's Baby. The two directly interact through contrivance of plot, crossing over what is, for the most part, two separate stories: Dan in a reclusive compound of brutalist concreate geometry provided by Virgil Davenport, and Melody in the urban gothic apartments and hallways of The Visser, a block built on the site of an occult ritual.

... a confident holisticness that implies a steady hand at the wheel.

The two stories are shot with their own styles – the cold tones of Dan’s surroundings adding to his isolation, the warm colours of The Visser smothering Melody – but with a confident holisticness that implies a steady hand at the wheel, Sonnenshine guiding her confident series directors Rebecca Thomas, (Stranger Things) Haifaa Al-Mansour (Wadjda), and cult darlings Aaron Moorhead and Justin Benson (Spring, The Endless).

Unfortunately, the missteps are too frequent to call it an unmitigated success. A goofy guy in a demon costume recalls episodes of Buffy the Vampire Slayer, a couple of very poor turns from the more villainous characters and, least palpable but most affecting of all, a lack of clear grounding in its time periods make for an uneven suspension of disbelief. None of this is helped by a tendency to overexplain or to show too much, particularly in its slightly-too-neat pair of final episodes; wobbles which just keep Archive 81 short of being truly gripping.