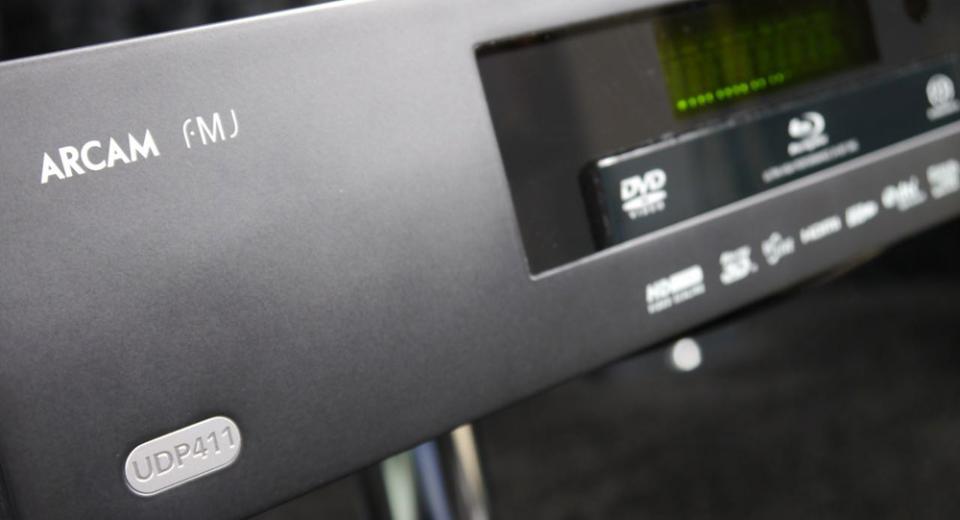 The UDP411 is a universal Blu-ray player from Arcam and forms part of their FMJ range. Strictly speaking it isn't actually universal because it doesn't play DVD-Audio discs, however it does play just about everything else including Blu-ray (2D and 3D), DVD, CD and SACD; along with AVI, MPEG4, WMA and MP3 media files. It has been designed to offer an audiophile level of performance and, as such, includes a 24-bit 192kHz Delta Sigma DAC and balanced XLR stereo outputs.

The Arcam UDP411 also comes with a high-end price and will set you back £1,199 at the time of writing (April 2015). That's a hefty wedge for a Blu-ray player these days, especially with Ultra HD 4K Blu-ray just around the corner. So does the Arcam UDP411 do enough to justify its price tag?

The UDP411 uses the same styling found on the rest of Arcam's FMJ range, with an all-metal construction and black finish. The design is quite attractive but very minimalist in its approach, with a simple front panel that includes the bare minimum of features and controls. There's a reasonably large and informative display in the middle of the front panel and beneath that a disc tray whose mechanism is suitably quiet in operation.

As is often the case the disc tray itself is quite shallow, so be careful to ensure discs are properly in place before closing. There are also some basic controls on the right for stop/eject, play/pause, skip back, skip forward and power on/off; although these buttons aren't illuminated, which makes them hard to see in a dark room. As you'd expect the overall build quality is very good, with a nicely engineered feel and a solid construction; the player itself measures 433 x 400 x 100mm (WxDxH) and weighs 6.2kg. Around the back are all the connections and here you'll find an HDMI output, coaxial and optical digital outputs, a USB 2.0 port and an Ethernet connection. Although there's also a built-in wireless connection that uses an antenna you will need to screw in when you setup the player. There's an RS232 connector for serial control, an IR remote input and a 12V trigger. In terms of the analogue outputs there's an unbalanced stereo pair using RCA connectors and a balanced stereo pair using XLR connectors. Finally there is a kettle style connector for the power cable.
The UDP411 is attractively designed, nicely engineered and very well constructed.

The UDP411 comes with one of Arcam's standard remote controls, which is slim, light and made of black plastic. The remote is comfortable to hold and easy to use, with a backlight that will prove useful in a darkened room. All the buttons that you need to setup the UDP411 are included, along with those needed to navigate and play discs. If you have an iPad then you also have the option of using Arcam's free remote app rather than the provided remote control. The app is well designed, attractive to look at and highly intuitive to use; making it an effective way of setting up and controlling the UDP411. In fact our only complaint would be that it's not currently available for the iPhone or any Android devices.

As with many of Arcam's products, when it comes to the UDP411's features and specifications, the emphasis is very much on build quality and performance. As mentioned in the introduction, the UDP411 allows for playback of most disc formats including Blu-ray (both 2D and 3D), DVD, CD and SACD. The UDP411 keeps the video path direct and simple with broadcast quality digital video clocks and processing that can upscale to a resolution of 4K. Other features include an iPad remote app, built-in WiFi, media playback via USB and uPnP and a pair of stereo balanced XLR outputs.

As far as it's audiophile credentials go, the UDP411 also uses a class leading TI/Burr Brown PCM1794 digital to analogue converter (DAC) which, coupled with a linear phase Bessel output filter and a high precision re-clocking system results in sound quality comparable to a dedicated audiophile CD player. The UDP411 has also been specially designed with discreet sub-regulated power supplies on the drive, audio and DAC boards to deliver significant benefits to the overall performance of each element and thus allow each section to work truly independently and without interference.

As long as a Blu-ray player isn't doing anything it shouldn't, then 1080p/24 content output over HDMI should be identical from one player to another. So we were pleased to see that Arcam have taken the approach of keeping the video output on the UDP411 simple and direct. They have resisted the urge to include unnecessary picture controls and have instead concentrated on ensuring that the original high definition signal is precisely rendered. The use of broadcast quality video clocks may not make a visible difference but it certainly can't hurt and we found that the player produced a flawless performance with Blu-rays.

The same is true of 3D Blu-rays and as long as you have everything setup correctly, then one 3D Blu-ray player should be identical to another. It's important that you avoid fiddling with 3D controls in the menu of your player or display; after all it's the filmmakers who should decide just how much negative or positive parallax a certain 3D shot should have. So just let the player output exactly what's on the disc and let the display simply show the 3D image. Thankfully the UDP411 is free of unnecessary 3D controls or 2D to 3D conversion gimmicks and as a result, the performance with 3D Blu-ray was impressive, delivering exactly what's on the disc without resorting to unwarranted manipulation or creating crosstalk.

This is one area where a Blu-ray player can add value to the video and the UDP411 did a great job of deinterlacing and upscaling standard definition content, primarily DVDs of course. We ran through all of our usual tests and the Arcam passed easily, producing a lovely deinterlaceds and upscaled image that was free of any unwanted artefacts. So whilst you may not watch that much standard definition content these days, if you do pop a DVD into your new UDP411 you'll certainly be happy with the results.

This is one of those features that is nice to have but its usefulness is debatable. After all if you have an Ultra HD 4K display then it will already have its own 4K upscaling, which will almost certainly be just as effective. However since we had a pair of Ultra HD 4K displays in for review at the time, we were at least in a position to test this feature. As it happens, the UDP411 did an excellent job of upscaling lower resolution sources to Ultra HD 4K, although we couldn't see any difference between the player's upscaling and that of the display itself.

The UDP411 was reasonably fast at both powering up and loading discs, whilst the excellent build quality ensured that its transport was smooth and quiet. Whilst the loading times of discs will vary from studio to studio, it was still extremely fast with most discs loading in less than 20 seconds. When it came to DVDs, the was just as quick, with most discs loading in seconds. The Arcam was also very agile at navigating discs and extremely responsive to commands, making it a pleasure to use.

If you plan on using your Blu-ray player as a digital transport, then there are probably more appropriate and certainly cheaper alternatives to the UDP411. However, for the purposes of the review, we tested the digital outputs with a number of lossless audio tracks from Blu-rays and lossy versions from DVDs. We also listened to multichannel audio from SACD, as well as two channel audio from SACDs and CDs. We tried different methods of connecting the UDP411 including HDMI, optical and coaxial and also switched between bitstream and PCM. The Arcam was able to detect all the different discs and audio formats without any problems and played each one back flawlessly, proving that the UDP411 is a very capable digital audio performer.

However, it's the player's audiophile credentials that set it apart from most other Blu-ray players and the UDP411 delivered a fantastic analogue audio performance. The stereo reproduction was excellent, with a clearly defined front soundstage and a wonderful amount of detail and clarity. The sounds were nicely focused and there was a real sense of presence, whilst the audio also showed a wonderful frequency response and an excellent dynamic range. Overall this was an impressive performance and amongst the best we have heard from a Blu-ray player. Whether you feel this justifies the price tag is another matter but if you're looking for a Blu-ray player that can double as an audiophile player, then the UDP411 fits the bill.

The video performance was impressive and coupled with some serious audiophile capabilities.

The Arcam UDP411 is certainly a great Blu-ray player with perfect playback of Blu-ray and impressive upscaling for lower resolution video sources; whether you really need 4K upscaling is debatable but that also works very well. However, any well made Blu-ray player that outputs the video directly from the Blu-ray disc should be able to match the UDP411, so its merits rest on the audio performance. Thankfully this is excellent, with an impressive delivery over HDMI and a superb performance with analogue audio; all of which makes the Arcam a good choice for those who value sound quality.

The UDP411 doesn't play DVD-Audio discs so it isn't as universal as the name suggests but it does cover just about everything else. The features are limited but those that are included work very well, although a remote app that supports the iPhone and Android devices would be a nice addition. Overall the Arcam UDP411 is an excellent Blu-ray player that can double as an audiophile CD player but at £1,199 it's rather hard to really justify the price; especially given some of the competition and the prospect of Ultra HD 4K Blu-ray just around the corner.

If all you want is a Blu-ray player to watch Blu-rays over HDMI then there are literally dozens of other much cheaper alternatives. However if you're looking for a well made player that can deliver an excellent performance then the Oppo BDP-103EU is the obvious choice. It's genuinely universal, has fantastic scaling up to 4K, loads of great extras, a superb level of build quality, 7.1-channel analogue outputs and a flawless performance over HDMI. It's also only £499 which is expensive for a Blu-ray player but considerably cheaper than the UDP411.

However the direct competitor to the Arcam is Oppo's BDP-105EU which offers a similar level of audiophile performance but at a retail price of £999. Like its much cheaper sibling, the BDP-105 is genuinely universal, built like tank and has loads of extras. It also has superb video upscaling, analogue 7.1 outputs and balanced stereo XLR outputs. In testing we found that the Oppo performed flawlessly with video and was superb with audio so, when you consider that the BDP-105 is nearly £200 cheaper, it's hard to really overlook the additional cost of the Arcam UDP411.