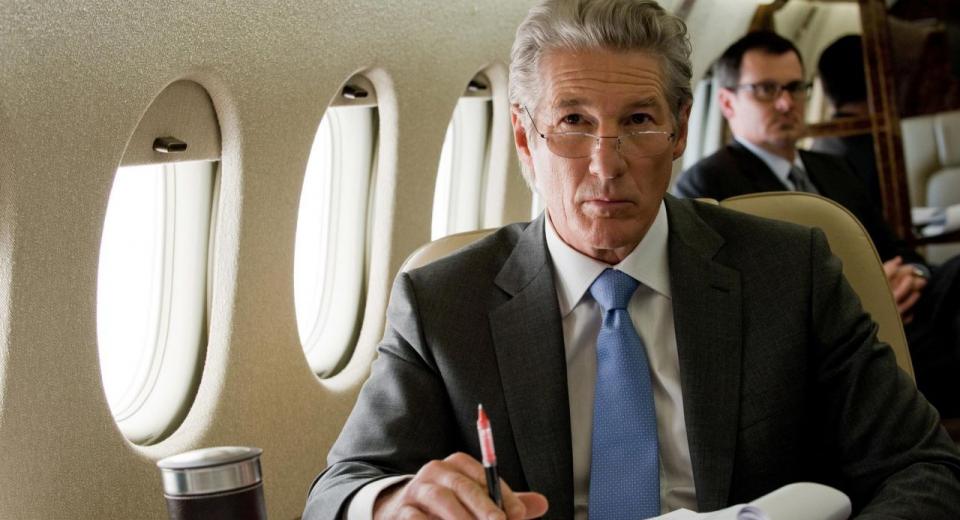 Driven by a career-high performance from Richard Gere, Arbitrage takes us on a tense ride through a climactic few days in the life of an ostensibly successful businessman who has everything... and thus everything to lose.

Despite the fact that you should despise this arrogant, privileged corporate psychopath - who seemingly has no morals - events conspire to eat away at his diamond-hard exterior and show you a glimpse of a man who actually has very little of any worth, as his family and his fortune have actually been built on a series of smooth lies.

Arbitrage is the practice of profiting from the price difference between two or more markets. Arbitrage 101: If you can convert into $1000 into £500 in the New York exchange, and can convert £500 into $1200 in the London exchange, then arbitrage would be the act of doing both exchanges in tandem; converting $1000 to £500 to $1200 and therefore instantly making a $200 profit at zero risk. Of course, in practice, the transactions are considerably more complicated than this.

Celebrating his 60th birthday, hedge fund manager Robert Miller is on the eve of selling his multi-million-dollar company. His daughter, Brooke - who also happens to be the Chief Finance Officer for the company - does not understand why he wants to give it up, but Miller has secrets which can only truly be covered up by a quick sale. The trouble is that the prospective buyer is playing hard to get.

At the same time Miller is struggling to keep hidden the affair that he is having with Julie, a young artist whose gallery he pays for. His wife wonders where he is always rushing off to; Julie wonders why he is always late; something has to give. After a terrible accident, however, the walls start closing in on Miller. Will he be able to keep juggling his multiple deals - criminal, financial and familial - and come out unscathed?

“I’m a child of the ‘50s. My parents lived through the Depression, Pearl Harbour, and the bomb. They didn’t think that bad things might happen. They knew that bad things would happen.”

Nicholas Jarecki’s theatrical writer/director debut, Arbitrage, is an impressive first outing, both in terms of script and direction, as well as with regard to the performances therein. Indeed it’s the kind of work you would expect from a seasoned filmmaker – not someone relatively fresh to the game, and it’s no wonder that the film wooed audiences at the Sundance Film Festival.

Playing out a little bit like Denzel Washington’s tour de force drama, Flight – only in reverse – rather than take an ostensible hero and clinically deconstruct him over the course of the piece to show the irrepressibly flawed individual within, Arbitrage instead paints a sumptuous portrait of an unquestionably shallow, financially-motivated corporate psychopath, and then keeps you on tenterhooks wondering whether he will ever display a hint of selflessness. Both excellent dramas, however, peddle the same compelling wares: juxtaposing clean-cut appearances with dark underbellies.

Indeed, as Gere’s lead character makes clear repeatedly over the course of the drama, it’s all about appearances: if you can make it look like your accounting books balance, the auditors will leave you alone; if you can make it look like you’re in profit, people will be encouraged to buy from you. It doesn’t matter if it’s all a lie – the end result will still be corporate success. The legal, moral, financial, personal, familial and criminal mire that he gets himself into as a result of this high-end subterfuge is understatedly complex and utterly compelling.

“You think money’s going to fix this?”
“What else is there?”

In a role that was originally planned for Al Pacino, Richard Gere actually seems the resoundingly better choice. Whilst the once-great Pacino certainly needs a decent role, his recent film choices have been anything but praiseworthy, whereas Gere, who has considerably less limelight, still picks interesting roles and still delivers commendable performances.

At face value, Robert Miller may seem like the easiest of roles for Gere to pull off; yet another suave, selfish, arrogant career manipulator who can get away with anything through his smooth talk and unstoppable charm. But it’s in the intricacies that his performance stands out above the others; the subtle touches, the cracks in the veneer that you can see form through the occasional look, or the occasional raised voice.

His character is already attempting the biggest piece of cunning arbitrage in his career – the failure of which could have ramifications not just on his life, but on the lives of countless others – when he is also thrown a moral curveball, leaving him in a truly impossible quandary. And he wears it on his face in every scene, carrying the true weight of his dilemma, and displaying it behind the look in his eyes.

Whether you choose to believe that he is almost entirely selfishly motivated – by money, power, greed, and a self-preservation instinct that sees him want to avoid jail-time at all costs – or whether you think that there are degrees of selflessness about his actions, Gere’s portrayal of the conflicted character is made all the more interesting by the great big grey area that he basically lives in. Who knows what his motivations are? He tells everybody else that he is doing it for the good of the company; that many people will lose their jobs as a result of the fall of this deal; that he is doing it to protect his family – indeed it would be very easy to believe him because he certainly appears to have convinced everybody else, including himself. But when the ultimate decisions come, what side will he fall down on?

“How much money do you need? Do you want to be the richest guy in the cemetery?!”

It’s a fantastic performance from a man who has rarely had the opportunity to flex his acting muscles like this, striking at it in the early stages of his career – American Gigolo, An Officer and a Gentleman, Days of Heaven – but only hinting at it once he became a bigger Box Office draw – Internal Affairs, Primal Fear. Of late, he’s had less ostensible success, but possibly more interesting roles, with underrated gems like The Flock, The Hunting Party and Brooklyn’s Finest all bringing him closer to that early-era glory that he was once known for. Arbitrage takes it to a new level, however. It could easily go down as the greatest performance of his career.

The supporting characters are largely well-rounded, but are neither painted as well as Gere’s lead, nor driven by such resoundingly powerful commitment to the various roles. Susan Sarandon barely gets anything to sink her teeth into as Miller’s seemingly loyal wife (although at least she isn’t as much of a wasted mess as she was in Cloud Atlas); Another Earth’s Brit Marling puts in a stronger performance as Miller’s unsuspecting daughter; and Nate Parker (The Great Debaters, Red Tails) pulls off a solid supporting turn as an innocent old contact who Miller draws into his seedy world.

It’s only really Tim Roth (Pulp Fiction) who struggles to convince as the clichéd dogged detective on Miller’s trail; Roth overplaying his hand, with a jarring New York accent and an unforgiving character design – his cop’s hatred of the wealthy is just too shallow a motivation for his increasingly obsessive behaviour.

No, what drives the piece is Gere’s central performance. Beneath it Jarecki’s strong script shines through; around it the stylish cinematography lends the piece some serious heavyweight credibility; and, surrounding it, we have the unconventionally evocative score – which has the same feel to it as Cliff Martinez’s fantastic accompaniment to 2011’s masterpiece, Drive; but it is all ultimately channelled through and around Gere. And he delivers.

“The more time that passes, the more lies get told.”

Even if you can’t absolve him of his sins; forgive his indiscretions; or justify his immoral actions, journeying with him on this dark voyage is undeniably infectious, totally enthralling and utterly compelling. In the complicated world in which he lives, and with the complicated mindset which dictates his every action, we can but wonder what we would do; what choices we would make; and whether there is indeed such a thing as a ‘right’ decision.

Nicholas Jarecki’s theatrical writer/director debut, Arbitrage, is an impressive first outing, both in terms of strong script and stylish direction – and even evocative score – but it’s the commanding, career-high central performance from veteran actor Richard Gere which truly drives the piece. Fairly choosy, and certainly no longer the A-list draw that he once was, Gere has nonetheless had some interesting roles across the years and this could well be his finest performance yet.