In terms of audio-visual experience, think Tron: Legacy, only underwater 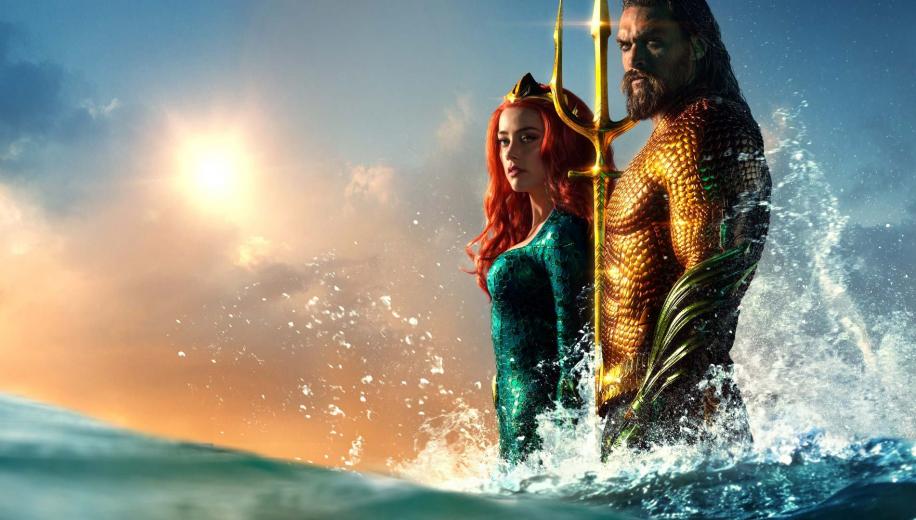 After wrecking their entire Justice League, and losing its core frontrunners Batman and Superman, DC nail some underwater magic with this audiovisual wonder.

Despite it seeming unfathomable that any film studio could mess up the greatest comic book superhero ensemble of all time, Warner/DC did precisely that, leaving the Justice League characters in tatters, with only Wonder Woman intact out of the core trinity, and few holding out hope for the secondary character of Aquaman, or desperately anticipating his solo debut in spite of actor Jason Momoa's likeably cocky larger-than-life Dwayne Johnson-esque portrayal of the same.

Thankfully, Fast & Furious 7 director James Wan didn't get the memo, and instead set about crafting an insanely intricate and lavish underwater experience, literally like taking Kosinski's Tron sequel and expanding its scope to take those neon futurescapes underwater. James Cameron's long overdue Avatar sequels will have their work cut out for them to try to top what Wan brings to the table, envisaging a stunning new world deep beneath the ocean, and realising a multitude of captivating, imaginative action sequences both above and below the waves. Comic book mythology, character development, and even the script don't really hold up, packing the hefty near-two-and-a-half-hour actioner with a lot of competing sub-stories, but somehow still winning out just in terms of the sheer visually eye-popping ride.


Aquaman is a wondrously realised event movie - an experience that defies story, script, and characterisation to captivate through sheer audiovisual majesty

The story basically concerns a fight for the throne of Atlantis, with half-brothers Orm and Arthur Curry - Aquaman - at odds over Orm's desire to declare war on the surface dwellers. However, not content with this simple backbone, the DC epic also makes time for the ubiquitous origin story, training, romance, and revenge plots involving the murder of the parents of several of the characters, a lost trident which holds immense power, a second super-villain antagonist, and an entire sub-plot involving a trench full of monsters - which is purportedly being used for its very own spin-off.

Momoa has a whole lot of fun as Aquaman, capable of bringing that super-arrogant Dwayne Johnson attitude to bear, but with a more serious edge that Johnson isn't always able to reach (but Momoa is). Sure, he plays him a little dumb - thankfully often attracting the best laughs ("something, something... trident") but he's a character you can certainly get behind, and DC are desperately in need of those. Amber Heard is also both stunning, and superbly kick-ass as Mera, often impressing even more than the lead character himself with her mastery of water. Patrick Wilson makes for a well-realised antagonist (although Yahya Abdul-Mateen II is arguably superfluous as the secondary foe), with Willem Dafoe and Dolph Lundgren, enjoying a comeback of sorts between this and Creed II, help colour in the peripherals. Nicole Kidman also gets a juicy, equally kick-ass role as Aquaman's mom, with some tremendous de-ageing applied to the likes of Dafoe and Temuera Morrison.

The characters are decent enough - even if there's a glut of core players - but it's Wan's underwater magic that really captivates, with some astounding world-building on offer here, turning Atlantis into a stunning neon futurescape that puts Black Panther's 'hidden' African kingdom to shame. It's pure Tron: Legacy (replete with a commensurate score, that also nods towards the funky otherworldly sci-fi fantasy of Thor: Ragnarok) and leads to a number of utterly spectacular setpieces, many of which go spinning around in expertly choreographed 360 panning shots that easily best anything we've seen from DC before, at least action-wise. Aside from a distinct lull in the middle of the feature where Arthur and Mera are somewhat unconvincingly wandering in a green-screen desert, Aquaman is a beautifully and wondrously realised event movie - an experience that defies its normally integral story, script, and characterisation components to captivate through sheer audiovisual majesty. It may be a movie too late to save the Justice League, but it's certainly enough to catapult the secondary character of Aquaman into the limelight for his very own franchise.

Aquaman comes to UK Ultra HD Blu-ray courtesy of Warner, who offer up likely the exact same excellent package that their US release was afforded. The big budget CG-enhanced digital cinematography belies a 2K Digital Intermediate that, technically, holds it back but, in reality, doesn't stop it being utterly stunning.

The disc presents a native 3840 x 2160p resolution image utilising the film's original theatrical aspect ratio of widescreen 2.40:1 for the most part, benefiting from opening up in the IMAX shots to a wonderful 1.78:1 ratio a la Mission : Impossible - Fallout. It uses 10-bit video depth, a Wide Colour Gamut (WCG) and High Dynamic Range (HDR), as well as Dolby Vision, and is encoded using the HEVC (H.265) codec.


One of the best looking films on the format

Aquaman is one of the best looking films on the format, affording excellent crystal clarity to its facial details and background observations (so much so that the desert sequence looks unnaturally fake) and affording stunning backdrops above and below the water, and fine detailing on the skin textures and superbly realised outfits. Of course it's HDR, WCG and Dolby Vision that really set this apart from the 'standard' 1080p counterpart, bringing the neon futurescape of Atlantis to eye-poppingly vibrant life, replete with some retina-searing blasts of plasma, scorching oranges, blues and pink-hued reds, and underwater lighting that ignites the landscape. Black levels are strong and Wan's visual universe is utterly perfected here, with a reference presentation that will remains hard to beat in terms of current go-to demo material.

The accompanying immersive object-based 3D High Definition Dolby Atmos track is just as impressive, submerging you with its percolating noises right from the outset, bringing crashing waves and underwater fury to life, tearing across your living room with myriad sea life, and booming through your walls with plasma weaponry. Coupled with a largely impressive score which occasionally hits the highs of Daft Punk's Tron: Legacy score, whilst also reminding us of the more recent scoring to Thor: Ragnarok, and you have an utterly reference effort that perfectly marries with the video to provide one hell of an audiovisual experience.

Discrete sound usage is impressive, to say the least, even in the quieter moments - with bubbles of water, waves in the background, swishing sharks and rumbling craft all fabulously realised. The futuristic, plasma-based, near-organic weaponry booms across the array, whilst the LFE channel hardly gets a moment's pause, and the surrounds remain almost constantly engaged by the score. The clarity and coherence of the dialogue is almost secondary to everything else but it's still well-rendered, particularly with that 'underwater effect' that could have easily led to muffling and confusion. This is an all-round excellent track. 100 minutes of mini-Featurettes, but only on the Blu-ray

It may be a movie too late to save the Justice League, but it's certainly enough to catapult the secondary character of Aquaman into the limelight for his very own franchise

Aquaman is a whole lot of fun, defying the mere sum of its sometimes inadequate parts by offering a fabulous audio-visual experience which enthrals from beginning to end with but a brief lull in the middle. This 4K package brings the AV wonders home with stunning Dolby Vision-enhanced video, equally outstanding Dolby Atmos-enhanced audio, and a feature-length package of extras. Even if you rightly gave up on DC after Justice League, it's worth reconsidering your stance for Aquaman, which gives us a whole new underwater realm to explore; one which many will be keen to revisit. Highly recommended.