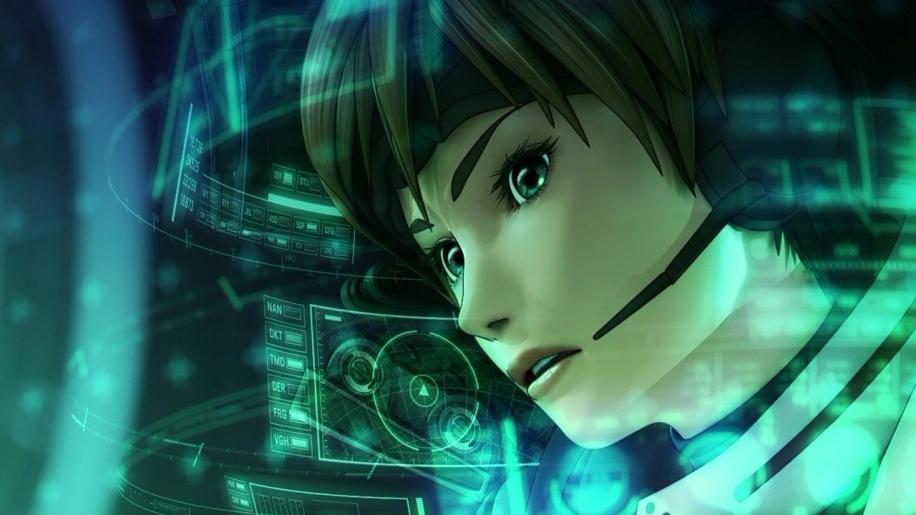 “In the year 2133 the world was plunged into an era of devastation and chaos. More than half the earth's population was killed off by non-nuclear global war. It was only a matter of time before the planet itself would become utterly uninhabitable and all life there would cease to exist. Human beings searched for that last seed of hope and when they could not find one, they created one. Olympus. In this new Utopia, those injured in the war were reconditioned into Cyborgs. International disputes would be buffered by a breed of genetically engineered humans, called Bioroids, designed never to feel such emotions as anger and hatred. To further ensure peace, Olympus also created ESWAT, an elite force with worldwide jurisdiction. Yet, with all gardens, this Eden was still susceptible to serpents, who seek its destruction.”

Deunan and Brialeous are the best members of the ESWAT Unit, partners - and lovers - despite the fact that Brialeous was injured in the war and has become almost more robot than human. Working perfectly together as a unit, their latest operation ends explosively, with Brialeous out of action and Deunan in need of a new partner - hopefully only temporarily. The higher powers introduce her to Terius, a bioroid who has been genetically engineered using Brialeous' own DNA. The end result is a person who bears a striking resemblance of what Brialeous looked like prior to his injuries in war, and has Deunan at first angry, and then just plain confused. Their chemistry is undeniable, but is it also genetically engineered, as clearly all of Terius' memories and actions are borrowed from his predecessor. When Brialeous returns to duty, things become further unclear and the love triangle becomes messy, to say the least, and to further complicate matters a recent spate of seemingly random terrorist attacks starts to become personal, and puts the ESWAT team in jeopardy. With some evil power behind a dastardly plot to control the minds both humans and cyborgs alike, and thus cause them to make these terrorist attacks, it is up to Deunan, her new partner, and a disgruntled Brialeous to get to the truth behind it all, even if not all of them make it out alive.

Having not seen the first Appleseed reworking from 2004 (I saw the original '88 movie, but the story is completely different, despite having the same core characters), it was quite nice to find that this sequel actually totally works on a stand-alone level, with a comprehensive introductory narration to set up the situation, and a plot that does not rely on any previous knowledge of Appleseed lore. Sure, the characters will have been established before, but it does not take long to figure out where things stand with these people. And stripping out all of the flashy action set-pieces and slo-mo, what is left is a nice little techno-conspiracy thriller with a complicated romantic love-triangle going off in the middle of it all. You can actually see why things are so confusing for these characters, despite the fact that the setting is a super-futuristic world of cyborg armed forces and scheming brain-hackers.

Obviously the action is sure to sate the appetites of all those who came here to see guns blazing. It is certainly never less than impressive, with more than a handful of classic John Woo moments (he produced the affair) - like doves, plenty of slo-mo shooting sequences, shell-casings cascading onto the floor and two-handed gunplay. It seems he had quite a lot of influence on this production and, for the most part, you forgive the now-clichéd style and just enjoy the visuals. The opening assault is superb, the CG characters looking pretty amazing (I know they're not trying to make them Final Fantasy-real here, but the movements and gestures are getting increasingly realistic) and the various skirmishes throughout the movie will certainly keep your attention.

On the downside, there is something to be said for a slight lack of originality. If it weren't for that personal love-triangle aspect, which is quite unusual in a movie of this type, the story is a collage of everything up to and including the Matrix (which is feels like the ending, in particular, borrowed heavily from), but you can largely forgive this because it is still thoroughly entertaining and is likely to have you wanting to know how everything gets resolved. If you like your Ghost in the Shell, your Masamune Shirow, or your anime in general, this is likely to be right up your street, and I think it is actually quite accessible for those who just enjoy an entertaining sci-fi yarn with interesting characters and fantastic visuals.