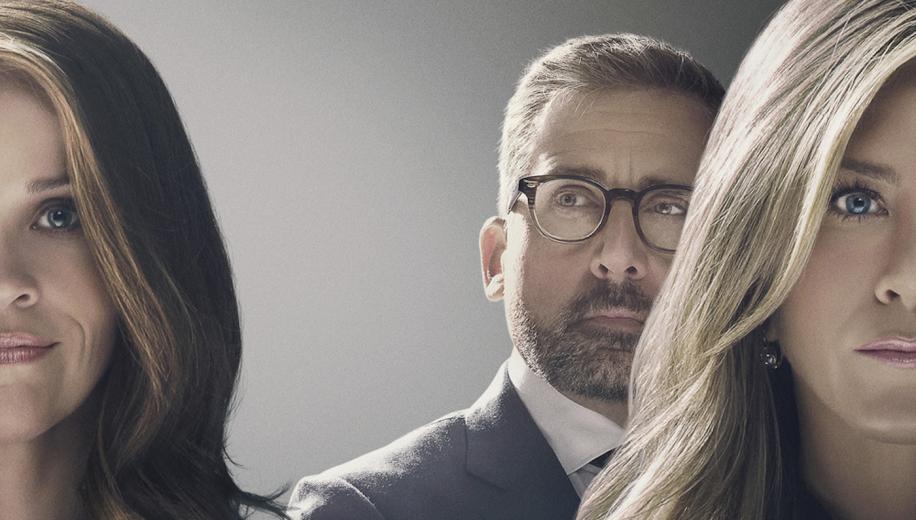 Diving headfirst into the #MeToo movement, Apple TV+ flagship drama The Morning Show boasts an all-star cast that leaves it one of the most expensive series of all time, and it's worth it too.

Former political consultant Jay Carson (who did work for a variety of politicians, including both Clintons) is the showrunner for this landmark event series, following up his work on House of Cards - somewhat ironically given the fall of that show's star - with a similar, albeit intentional, look at a fall from grace, and the damage that unfolds as a result. Although it is a landmark series, so far that has been largely as a result of its staggeringly high budget - with the two lead stars alone commanding $2 million each per episode, which, considering that this is hardly an effects-driven action or sci-fi vehicle, reportedly helped push the overall cost to Apple to somewhere in the shocking $300 million region for this ostensible vanity project.

Despite that, and the clear intent by the relative newcomer to the streaming services battleground to carve out some territory for themselves using sheer star power alone if necessary, The Morning Show makes a commendable effort to be genuinely compelling, often coming pretty close to actually being as weighty as it thinks it is, and certainly ending up no less than a tremendous showcase for its three impressive leads. Hell, it occasionally even delivers on the promise of showing some teeth when it comes to social commentary.


The Morning Show may openly voice its sentiment on the subject in the headline-grabbing early salvo but, to its credit, it's more nuanced than that, attempting to cite some level of distinction here in a toxic post-Weinstein world

When her co-host Mitch is fired amidst allegations of sexual misconduct, news anchor Alex finds her world turned upside down and her own position under threat as the Studio scramble looking for a replacement - happening across an internet sensation: outspoken field reporter Bradley, who may just be what the public wants, even if she's not really what Alex wants.


Initially startlingly predictable - there's almost nothing that happens in the first few episodes that isn't easy to see coming a mile away - The Morning Show does well to move past its almost formulaic plotting to eventually shift into a compelling show that displays a not insignificant degree of very welcome insight into the current, ferocious #MeToo movement, affording opinion from a variety of camps without wandering too far into either politically incorrect, politically insensitive, or extremist view territory, and putting a suitably heady spin on the whole messy affair.

Steve Carrell puts in a fabulously fiery performance as the outraged Mitch, citing McCarthyism and claiming that this is nothing but a witch-hunt; a trial - and execution - conducted entirely in the public arena. His former boss, played by Watchmen's Billy Crudup, sympathises with the manner in which the 'trial' is unfolding, unchecked, but clearly thinks that Mitch should have behaved better, although he's so damn smooth you have to wonder whether he himself doesn't behave exactly the same way... Aniston's Alex is devastated by the loss of what is almost like a life-partner to her, and appears more frustrated by that than by any perceived misconduct, although publicly she is made to condemn him utterly. And, even more interestingly, we get Mitch's own historical opinions on the subject, viewed through a clip from an old interview where he criticised another 'accused' man for not acknowledging that the women he had relationships with looked up to him, and were vulnerable to his position of authority over them. Throw into the bargain the studio climate of enabling, the people who were aware of what was going on - and those that condoned it, and maybe even didn't think there was anything wrong with it - and the complex angles on even the victims' tales (which are far from clear-cut), and whilst The Morning Show may openly voice its sentiment on the subject in the headline-grabbing early salvo - the public condemnation on air - to its credit, it's much more nuanced than that, attempting to cite some level of distinction here in a toxic post-Weinstein world. And sometimes, just sometimes, it manages to pull that off.


The Morning Show makes a commendable effort to be genuinely compelling, often coming pretty close to actually being as weighty as it thinks it is, and certainly ending up no less than a tremendous showcase for its three impressive leads

Clearly, Jennifer Aniston is supposed to be headlining this show, and she's on strong form for sure - despite the amount of work done to keep her looking the same way she has looked for the last decade, kind of going down the route of being the opposite of graceful ageing. Considering the nonsense she commits to for a buck on Netflix, it's nice to see her get her teeth into some meat (and she's got form: Cake), rising to the occasion, and playing well opposite a scene-stealing Carrell, who feels the most assured out of the three leads even if he gets the least screentime. But it's secretly Witherspoon's baby, who part-produced the show through her company Hello Sunshine, and who continues her unexpected comeback run with gusto, following some tremendous work stealing the show in Big Little Lies. Her honest, says-what-she-means, character, is a refreshing addition to the seasoned cynics and power-players that she is surrounded with, and is not just what the talk show needs, but what the series itself needs to keep you invested. The three are worth every penny, and by a few episodes in, they'll be the ones who have you absolutely hooked.

A slew of additional familiar faces no doubt also contributed towards the hefty $300 million price tag - the omnipresent Mark Duplass, recently in Goliath; Black Mirror standout Gugu Mbatha-Raw; Bates Motel's Nestor Carbonell; and This Life's Jack Davenport, as well as countless others in smaller parts - but it's still that trio in the lead that do the heavy lifting, proving more than just the headline-grabbing prize-tag of drawing them in to a regular TV slot just to, essentially, herald Apple TV+'s launch. Well-scripted and sometimes even surprisingly biting, it's an incisive production, almost weighty as it wants to be and with the potential to get there in the long run - and is worth watching for performances alone, whatever your feelings are towards the muddy media waters it swims in.