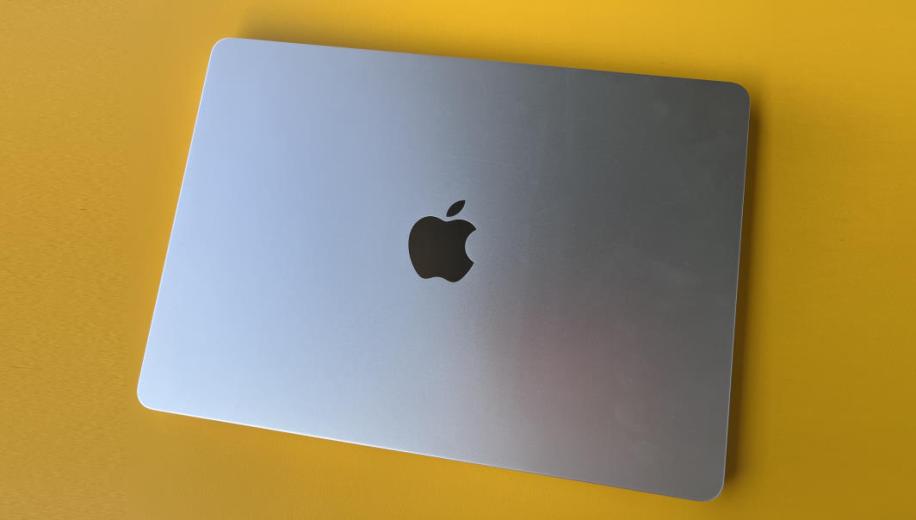 The new MacBook Air looks sensational and is extraordinarily light and has a great 13.6-inch display that’s bigger and brighter than its predecessor. The price tag is bigger, too, but it has excellent battery life and an even faster processor at its heart.

What is the Apple MacBook Air with M2 Processor?

The new Air is the new-design model of Apple’s lightweight and thin laptop. It’s only the second major redesign of the Air, which first appeared in 2008, when then CEO Steve Jobs, nothing if not a consummate showman, slid it from a manila envelope to show just how thin and light it was.

Ten years later, the second version arrived, technically the third-generation as a tiny update had improved the design in between. This continued the styling of a laptop with tapering edges so that it was almost impossibly thin. Unusually for Apple, it has kept this design in the range alongside the new version which looks different in lots of ways. It includes a new, powerful processor, the Apple M2. It also has a larger, brighter screen than before. To fit more screen into a device which is similar in size to its predecessor, the bezels are narrower. So much so, there’s no room for a webcam around the frame, so Apple has turned to a mechanism it has used on the iPhone: the camera sits in a cut-out at the top of the display. Not everyone likes a cut-out, of course.

The new MacBook Air is pricier than the last-gen model, a full £250 more, in fact. So, is the extra display, new design, better camera and speakers enough to justify that extra cash? Read on. 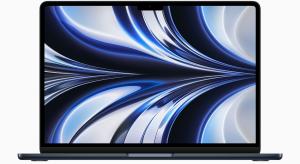 by Ian Collen · Jun 7, 2022
Apple's latest MacBook Air and Pro laptops are powered by the upgraded M2 processor and were announced along with a host of new OS 16 updates from the latest WWDC event.

Everything about the new Air is different from the last one. The Apple logo is bigger, in keeping with the spiffy design introduced last autumn for the 14-inch and 16-inch MacBook Pro. The anodised aluminium from which the laptop is built comes in new colours: as well as the familiar Space Grey and Silver, there are two new ones. The previous gold finish, which was rather fruity, as though a ripe peach had fallen into the factory production line, is replaced with Starlight, which is beautiful. It’s pretty much silver in most lights, but gleams with hints of gold in some situations. Finally, there’s Midnight, which is also highly attractive, a deep black with blue tones.

But the big change in the look comes from the new shape. The familiar tapered edges are replaced by a flat lid. This means that where Apple previously quoted two figures for the laptop’s thickness, to indicate where it was at its thinnest or thickest, now there’s just one figure, 1.13cm. That’s thicker than the tapered edge was before (0.41cm) but much thinner than the main body of the older machine, 1.61cm. In other words, this laptop is very thin. This thinner profile means that the overall volume of the MacBook Air is 20 per cent less than the last model, which is a striking difference.

The speaker grilles that sat either side of the keyboard on the older machine have gone. In fact, the speakers, and there are four of them, are invisible unless you know just where to look. Open the laptop wide and peep into the gap between the top and bottom halves, and you can just see four small lozenge-shaped openings. The speakers are tucked inside and bounce the audio off the underside of the lid.

Everything about the new Air is different from the last one

The upward-facing grilles of the last MacBook Air and current MacBook Pro laptops have stronger audio, I’d say, and there’s less richness here. Until you turn to Spatial Audio, that is. Spatial Audio, as you’ll know, is the Apple equivalent of Dolby Atmos or Sony’s 360 Reality Audio, designed to create a surround-sound effect. It was available on the last MacBook Air, too, and other Macs which have the M1 chip. Spatial Audio content (and there’s a lot of it in Apple Music, for instance) sounds terrific from these hidden speakers, with a wide soundstage and immersive effect.

The keyboard is different from the last model, too. Before, the top row of function keys was half-height, to allow more room for keys and trackpad. Here, that row is full-height, making for keys which are easier to strike and look at: the extra functions such as brightness, microphone and media playback are much more defined.

And there’s a benefit at the edge of the top row of keys. The power button, with built-in fingerprint sensor was perfectly efficient, if quite small, on the last design. Here, it’s bigger, and dimpled, so your finger can locate it and be recognised more effectively. It matches the design of the M1 iMac and 14-inch and 16-inch MacBook Pros.

Beyond that, this is the same set-up – Apple calls it a Magic Keyboard – with deeply comfortable, luxurious travel under each key. The trackpad is also sumptuously easy to use, big and responsive.

Connectivity is mostly like the last Air: two USB-C sockets sit on the left edge, a headphone jack on the right. But there’s one big change in the form of MagSafe. This was an Apple speciality where the charging cable was attached magnetically. This feature pays dividends with a computer as light as this. If someone trips on your cable, instead of the laptop going flying, the magnetic link smoothly disconnects. You can charge the MacBook Air through either of the USB-C Thunderbolt ports, of course, but if you use MagSafe then the USB-C sockets are available for connecting other devices. MagSafe is a very welcome return.

Lastly, the MacBook Air is perfectly balanced. If you try and open many laptops, most perhaps, with one hand, you find you can’t. The laptop slides backwards or tips up. The Air’s lid and base are matched so that the gentlest pressure from your thumb sees the laptop stay in place and the screen glide upwards in your hand.

Bigger, brighter, better – that’s the new display, and a good description of the new MacBook Air overall. Although the dimensions of the laptop have barely changed, the screen has been stepped up from 13.3 inches to 13.6 inches. That’s noticeably more screen. What’s more, the new screen has attractively curved corners and reaches much nearer to the top of the device.

As mentioned above, putting a webcam in place meant a cut-out in the screen. Apple did this with the recent MacBook Pro 14-inch and 16-inch models, and the design succeeds because for most of the time you’re using it, there’s a menu bar across the top of the display. Cleverly, Apple has ensured the cut-out is a little smaller than the menu bar, taking up otherwise dead space. When you’re watching video, the content has black bars at top and bottom, enough to ensure that the webcam isn’t covering your movie or show. Video playback is great. The display is 25 per cent brighter than the last-generation MacBook Air, that’s 500 nits instead of 400 last time around. Both the M1 and M2 Air laptops have wide colour (P3) and True Tone. True Tone is Apple’s subtle technology that ensures that what you see onscreen looks natural, by adjusting the colour output to match ambient light.

The camera has been improved, too, and it’s now a FaceTime HD camera, in Apple’s terminology. This is a 1080p camera, so your video conferencing is improved. At least, you’ll look better to the other guys on the call. This webcam beats the one in the just-released 13-inch MacBook Pro, by the way – a rare instance of the Air improving on the pricier Pro.

Oh, and you’ll sound good, thanks to the three-microphone array designed to capture audio with what Apple calls beamforming algorithms. This is the same as on the M1 MacBook Air and works well.

When Apple decided to make its own chips and move away from the Intel processors it was using, it started the Apple Silicon line. From autumn 2020, this consisted of the Apple M1 processor and its variants, M1 Pro, M1 Max and M1 Ultra.

What they all had in common was a significant increase in processing power and efficiency compared to what had gone before. Everything was much, much speedier, so much so that you almost thought the word SMUG had been tattooed onto the chip. Just as important as the step change in power was the energy efficiency. In Apple’s laptops, this meant battery life leapt considerably, by six or seven hours depending on the model.

This new Air is one of only two laptops to include Apple’s second-generation chip, imaginatively called the Apple M2. The other is the recent 13-inch MacBook Pro. While there isn’t the massive uptick in power that was seen with the move from Intel to M1, it’s still palpably faster. If you’re moving from an Intel Mac to this one, you’ll see an incredible difference – Apple reckons it’s up to 600 percent faster.

And the power efficiency remains. Here’s how you know: the Air is entirely silent in use because it is designed without a fan. That was taken out in the last redesign and replaced by an aluminium heat sink block. This means that when the power draw is too heavy, since there’s no fan to cool the system, there could be problems. When testing this laptop, no matter how hard I pushed it, there was never the slightest slowdown.

Really demanding power users with multiple power-hungry programs like intensive video editing, for instance, could swap to the MacBook Pro, which does have a fan, to be sure that they can make demands on the system for longer, but for most people, the Air will be more than enough.

And the battery life remains exceptional, blasting through a decent day’s usage with ease. To the extent that I became blasé to the idea of even needing to carry the power brick with me at all.

The Apple MacBook Air is extremely fast, has a gorgeous display and great battery life. But all those things could be said about the M1 MacBook Air which costs £999. So, why should you spend £1,249, an extra £250, for the all-new MacBook Air?

... a rare instance of the Air improving on the pricier Pro

Well, the display is bigger and 25 per cent brighter, the keyboard function keys and Touch ID button are bigger, the webcam is higher-res and the performance is even faster. Then there’s the fact that the new design with its boxier shape is just stunning, the new colours look great and this new Air is even thinner and even lighter than the previous one. Unusually, Apple didn’t retire the older model when it launched the new one, so you have the choice, and for many the M1 model will be more than enough. But if you want the best lightweight laptop, from any brand, the new MacBook Air is it.